Are the days over when Washington could shake its big stick and the rest of the imperialist world would immediately fall in line?

The Pompeo-Bolton-Trump gang of conspirators in Washington seems to be having a hard time lining up their imperialist partners/rivals behind an attack on Iran. Their attempt to create a global crisis over the damage inflicted on June 13 on two oil tankers in the Strait of Hormuz, which suffered no loss of life and were in no danger of sinking, was met with much skepticism — not only from the general public but from West European heads of state.

Even these fellow imperialists are well aware that U.S. preparations for an assault on Iran are based on a pack of lies — and to go along with them would put their own interests at stake.

The so-called “proof” offered by Washington that Iran was behind the attacks has been widely rejected, including by the owner of at least one of the tankers.

That ship, the Kakura Courageous, is owned by a Japanese company. It was attacked while the prime minister of Japan, Shinzo Abe, was actually making a state visit to Iran, despite U.S. sanctions.

The idea that Iran would choose such a moment to attack a Japanese ship is ludicrous, to say the least.

Nevertheless, as flimsy as the U.S. arguments to attack Iran are, Washington has been going ahead, trying to line up support from at least some of the European imperialist powers for an aggressive move against the oil-rich country. And on June 17, Trump ordered another 1,000 U.S. troops to the Middle East. 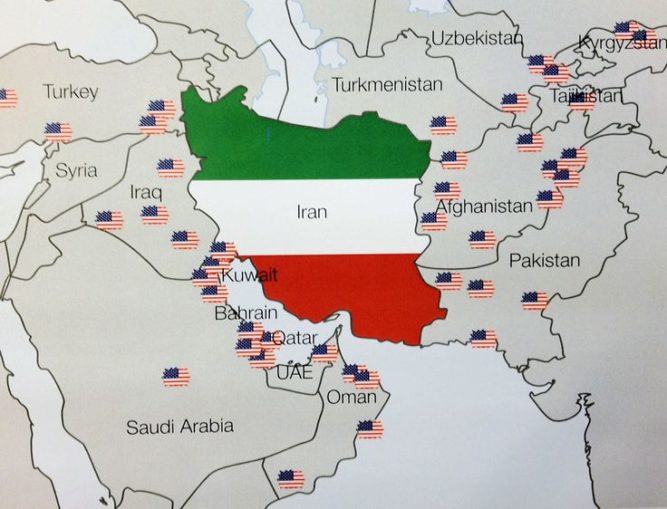 In this map of Iran, the U.S. flags surrounding that county represent U.S. military bases.

Iran has defied the pressure. On the same day, Iran announced that it intends to resume its production of nuclear fuel, which it had agreed to suspend in 2015 in exchange for lifting severe economic sanctions.

Iran’s move should come as no surprise. The Trump administration had already announced — a whole year ago — that it was pulling out of the 2015 agreement. It has since doubled down on the sanctions, trying to starve the Iranians into submission.

So why should Iran continue to honor the deal when the U.S. had already killed it?

At the time that Washington pulled out of the deal, the German, French and British governments said in a joint statement that the U.S. decision to re-impose sanctions on Iran was “deeply regretful.” It was an early sign that the U.S. ruling class could no longer just snap its fingers and round up its imperialist allies — which are also rivals — to rubber stamp its every act of aggression.

Nevertheless, the war danger remains. The Pentagon is moving more troops to the area, and the Trump administration is ratcheting up its threats against Iran.

It is the duty of anti-war forces in this country to view this seriously and take to the streets to resist this blatant aggression.

Where is the U.S. Congress in all this? This is the season when all eyes are supposedly focused on next year’s elections for both the presidency and the Congress, as though that will determine what happens in the future.

The U.S. Constitution is absolutely clear: Only Congress can declare war.

But the last time that happened was in 1942, in the middle of World War II, when the U.S. declared war on Nazi-occupied Hungary, Romania and Bulgaria. In the 77 years since then, U.S. presidents have sent young people to kill, die or be permanently maimed in dozens of undeclared wars.

All those who hold up the U.S. political system as a model of “democracy” should be held to account for this usurpation of power by the executive.

Of all the branches of government in this country, the U.S. House of Representatives is presumably the most democratic. But in fact both houses of Congress have long been a rubber stamp for military aggressions demanded by the rapacious billionaire class, which has ground up the bodies of so many, here and abroad, in its insatiable drive for super-profits.

This threat of war is playing out at a time when most governments are bracing themselves for a major downturn in the global capitalist economy. This decline has already started in important areas of production and in the deepening trade wars, but has yet to be reflected in the major stock markets.

Tellingly, the futures price of Brent crude oil, which had hit a five-month low of less than $60 a barrel the day before the attacks, had a brief but sharp rise on June 13, when it looked like a U.S. war on oil-producing Iran was imminent. When the prospects of that ebbed, as other Western imperialist countries refrained from endorsing Washington’s claims, the price of oil sank again the next day.

Nothing makes the profiteers salivate more than a juicy military intervention. For now, that hasn’t happened, and the markets as of June 15 reflected that. But there are no guarantees that the reckless cabal in Washington will back off from its threats against Iran.

At $60 a barrel, U.S. companies that produce oil through the expensive — and environmentally horrendous — extraction method of fracking can’t compete with oil pumped from wells. These companies want higher prices, and they want them now.

But the sinking commodity prices are a sign of capitalist overproduction on a global scale, and overproduction intensifies the fierce inter-capitalist competition for markets. A decline in the price of oil can also reflect pessimism about future economic activity.

Environment takes a back seat to profits

Even in this day and age, when the burning of fossil fuels has been proven beyond a doubt to be warming the planet and causing more and more deadly extremes of weather, the struggle over oil profits continues to be a major driver of capitalist competition and national antagonisms.

It is shocking to think that another war could be started in order to control the profits from a resource that is hazardous to the future of the whole world. But should anyone expect the capitalist rulers to be sensitive and caring about long-term global warming, when their system is driven by the dog-eat-dog daily struggle for profit and they are willing to create enormous human and environmental catastrophes with their wars?

It is no coincidence that the vast majority of countries subjected to U.S. military attacks over the past several decades have been oil-producing nations.

Just think about what the Pentagon and CIA have been doing: 1991, bombing attack and partial invasion of Iraq; 1998, cruise missile strikes on Sudan; 2003, invasion and occupation of Iraq; 2011, bombing of Libya and the murder of Muammar Gaddafi; 2012, beginning of war against Syria; 2014, airstrikes on Iraq and Syria.

Not to speak of the ongoing U.S. efforts to bring down the Venezuelan government with sanctions and coup attempts.

All of them are oil-producing countries. But not only that.

They are all countries that had been oppressed and exploited by European colonial powers. They had achieved a measure of sovereignty after a wave of liberation struggles brought about decolonization.

And precisely because they are oil producers, they had the wherewithal to successfully build up their national economies.

However, because of imperialist interventions in the Middle East, led by the U.S. but also participated in by the European NATO powers, many of these countries are today in tatters, their economies destroyed by war and their people traumatized to such a degree that they have no future and are fleeing by the millions.

This is the cause of the im/migration crisis facing much of Europe today, and that is a factor in the reluctance of these imperialist countries to be dragged into yet another war.

The latest threats against Iran are nothing new. U.S. imperialist governments, both Republican and Democrat, have had the country in their crosshairs since 1951, when a movement for national sovereignty led by Mohammad Mossadegh nationalized what had been the Anglo-Persian Oil Co.

Two years later, a CIA coup led by Kermit Roosevelt Jr. overthrew the nationalist government and installed the Shah, who allowed U.S. and British companies to take over the oil again. Roosevelt himself soon became an executive of Gulf Oil.

Bloody repression under the hated Shah eventually led to a mass uprising in 1979 that overthrew this oil-company puppet. A struggle among various class forces in that uprising resulted in today’s Islamic government.

While conservative in some areas, this government renationalized the oil and has used much of the proceeds to raise the standard of living of the Iranian people. At the same time, the U.S. has tried to stunt Iran’s development by imposing economic, trade, scientific and military sanctions on Iran, off and on, ever since the 1979 revolution.

As one important measure of its progress, today women make up the majority of college students in Iran and can be found in skilled jobs at every level.

Compare that to conditions in Saudi Arabia, which is ruled by the billionaire Saud family and has the most draconian anti-women laws on the planet.

The Saud monarchs get a royal welcome in Washington, while one of Donald Trump’s first trips abroad after becoming president was to visit King Salman at the luxurious Saudi Royal Court in Riyadh. Saudi Arabia, where dissidents are hacked to death and immigrants do all the dirty work while being treated like slaves, is in tight with the “leader of the free world.”

All the more reason for anti-war forces here to mobilize and state clearly to the world: Money for jobs, education and health care, not war! End the sanctions on Iran! No blood for oil profits!