Herrera is a Marxist economist and researcher at France’s Centre National de la Recherche Scientifique (CNRS), who works at the Centre d’Économie de la Sorbonne, Paris. He wrote this article on May 31. Workers World staff translated it.

A close look at the results of the European parliamentary elections held May 23 to 26 shows few surprises. In almost every country, the parties of the extreme right made gains — and in some cases — large gains.  This worrisome trend is nothing new on a continental scale. It is being confirmed and consolidated.

In addition to the 22 French members of the RN and the 28 Italians in the League, the self-named “Europe of Nations and Freedoms” will include three members of the Austrian Freedom Party (FPO), three from the Flemish Nationalist Interest Party (Vlaams Belang, VB) and one from the Estonian Populist Party.

Members of the “Eurosceptic” [critical of the European Union] reactionary forces of Law and Justice of Poland and the Hungarian Civic Union (Fidesz) should probably be included in this large contingent of officially proclaimed far-right political parties. Outside of France and Italy, the conservative and neoliberal right-wing parties have won throughout Europe — with the notable exception of the Iberian Peninsula, where left parties came in ahead.

The case of France is unique in this gradually more reactionary European picture. There, the European election campaign of the presidential majority party, La République en Marche (LREM), created in 2016 by and for Emmanuel Macron, was overshadowed by his “one-man shows” at the Great Debate, as he personally committed to the election. Macron’s appearance on election posters eclipsed the top of the list. The result was that LREM, with 22.4 percent of the votes, clearly lost to the RN.

Macron’s party lost despite his denials.  He walled himself up in political isolation. Macron comforts himself in his refusal to “change course,” despite the linguistic acrobatics of a government determined to move on to his presidency’s “second phase of reforms.” 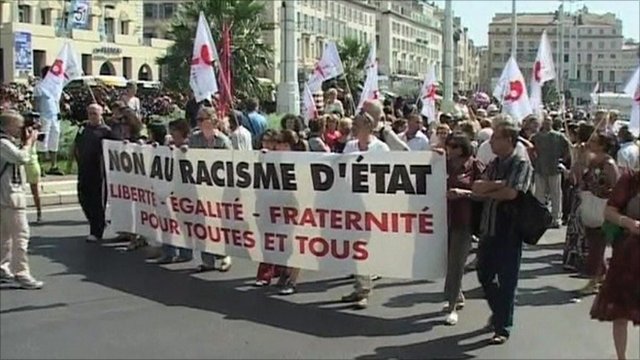 In France, a pro-immigrant rally says: “No to state racism.”

The two parties from which LREM partially came — the Republicans (the traditional right wing) and the rump remains of the Socialist Party, which is also right wing as well as a neoliberal, globalist, avidly pro-EU and pro-USA tendency — did very poorly.  The former received 8.5 percent of the votes; the latter received 6.2 percent, even with rounding up their scores to the next decimal point.

The combined results of the two partisan parties, which together had applied neoliberal policies for nearly 40 years (sometimes with one party’s leader as prime minister and the other’s as president), do not total 15 percent.

Therefore, the rejection of neoliberalism is massive. However, this policy will continue to be imposed in France. Democratically, they tell us. This is even though 23,613,483 citizens (49.9 percent of registered voters, slightly less than the number who voted) had abstained from taking part in the election. And 551,235 others voted for a blank ballot, a mode of political expression that is now counted. An additional half a million cast invalid ballots.

Even those who didn’t attend elite schools can see that the spectacle offered by the left is sinister.  France Insoumise received 6.3 percent of the vote and was happy to elect six deputies. It did not have any deputies in the current European Parliament, which is to be expected since the movement led by Jean-Luc Mélenchon did not exist during the 2014 elections.

This fiasco resulted from the cult of the leader, who is unusually gifted and cultivated; the sectarianism of his close entourage; and their absolute inability to produce a program that is both radical and coherent.

What happened to the French Communist Party? It has not been talking about socialism for a long time.  Only sometimes does it raise social demands and most often societal ones. It received only 2.5 percent of the vote, which is below the 3 percent necessary to even receive reimbursement for campaign expenses, and therefore also below the 5 percent level necessary to get even one seat in the European Parliament. The Trotskyists of Lutte Ouvrière, who got 0.7 percent of the votes, were imperturbable. The Revolutionary Communist Party, certainly not Trotskyist, received 0.01 percent.

‘Ecology is our future’

The Greens will tell us ecology is our future. No more dumping! The pot is empty. And they will be right. But probably not with our Greens, who from their new high, after having gotten 13.5 percent of the votes, can feel their wings grow and want to be the leading party of the left. But we still need proof that Europe Ecology, the Greens party, is really left wing! Didn’t Yannick Jadot, the head of their slate for the European elections, show he is in favor of reforms in civil service work laws and “rapprochement with … the private sector?”

That is just what President Macron calls for! What can we expect from Pascal Canfin, elected a member of the European Parliament — shamelessly, in second place on the pro-Macron slate? He is one of the Greens who reneged on his promise to ban glyphosate [an herbicide found in Monsanto’s Roundup weed killer] before 2021, who sat in on the Paris Climate Agreement talks — and who submits to the demands of polluters’ lobbyists!

What can you say about the Greens’ leader Daniel Cohn-Bendit? No need to waste energy, ink and a leaflet to evoke this clown. My thoughts are of sympathy with the poor veterans of the May 1968 uprising who must put a picture of this traitor’s face in the history books!

Back to basics. That refers to the far right’s electoral victory in France. Why did it win? Why do the rightists enjoy growing support among the popular masses, who, however, given their openness to personal, close relations with people of all nationalities and cultures, do not seem racist? Many deep, long term causes of socioeconomic, ideological and even psychological nature can explain this.

This is how we understand it: Racism is an intrinsically right-wing doctrine propagated by bourgeois ideology in order to divide the dominated classes. The popular masses are not genetically stupider than others and therefore no less capable of identifying their class interests, although they can be manipulated by the media.  Fairly large components of the same working class are now open to ideas about radical social change and ready for an “exit from the system.” Even some segments of the middle class seem to be on the verge of falling into that camp.

Let us risk putting forward one of these causes, among others, that is most important to the left, but still taboo. Increasingly, massive segments of the working class support the far right because they wrongly perceive the far right as the best party to provide them with solutions to the countless forms of suffering that overwhelm them and the fears that haunt them.

Workers fear unemployment, precarious work, downgrading of social programs, opening of borders, loss of national sovereignty and  immigration — all at the same time. And they also believe — and rightly so — that most of the partisan organizations of the left — as they currently operate, with their contradictions, divisions, hesitations and inadequacies — have given up defending them or are no longer able to.

It’s not that the left forces have their backs to the wall. They are up against the wall. The capitalist wall. Either they will finally understand that there is no way out of the capitalist crisis without overturning the capitalist system itself — or France, taking Europe with it — will inevitably follow the path that the United States has just taken, that of allowing the extremists to take power.

That’s the way it is with Washington’s two unwavering allies: Israel and Saudi Arabia. And now, too, Brazil, where far-right President Jair Bolsonaro is the inevitable product of the failure of reformism. Beginning with these countries as examples, it appears that getting out of capitalism is the absolute imperative of all true progressives.

This applies to ecologists first and foremost, who must be conscious that this crisis is a matter of life and death. Now more than ever, the fundamental alternative remains: socialism or barbarism.

If 88 million Europeans live in unacceptable conditions of poverty, some jobless, others thrown into competition with other workers, with all of them seeing their rights shaved away, it is because capitalism imposes these conditions.

If the “French State” — to name what it is becoming again — sells the flagships of nationalized industry [privatization], it is because it has chosen to abdicate in the face of Brussels’ dictates and the dictatorship of globalized big capital. (Among a thousand examples:  Alstom’s energy branch was acquired by General Electric, which has announced 1,000 employees will be laid off in Belfort, France.)

We must say: ‘Welcome migrants!’

If migrants seek to reach the coasts of Europe, it is because poverty and war drive them to do so, at the risk of their lives.  It is because capitalism is destroying their societies, and because imperialism generated by capitalism causes them to suffer from crimes against their countries. The climate crisis is causing enormous damage because there is no limit to the madness and greed of exploiters. We have to get out of this destructive spiral. And we must welcome migrants and treat them with dignity.

The spirit of justice requires a break with capitalism and an end to imperialist wars. Faced with hatred, rage, violence in the disease of the far right — the last bastion of the capitalist system — reason calls for the radicalization of progressive forces.  This requires abandoning hypocritical and collaborationist reformism and returning to a clear call that the transition to socialism and elimination of capitalism is the goal.

In the 1920s and 1930s, fascism spread across the European continent in different forms to counter the communists who — when they did not triumph in the wake of Red October — fought heroically with weapons in hand to the very end. They battled from the Spartakusbund in 1919 in Germany to the International Brigades in the 1936-39 Spanish Civil War. The heroes whom we revere and who make us hold our heads high are named Rosa Luxemburg and Dolores Ibárruri Gómez.

The modern extreme-rightists, on the other hand, have grown naturally on the nauseating slime left in the middle of the political scene by the leaders of the social-democratic bourgeoisified left. A left which is generated by an empty program, filled with crumbs thrown at them by the capitalists and domesticated by imperialist rent [superprofit] extracted from the peoples of the South. Their leaders confessed their defeat and capitulated miserably without even thinking of fighting.