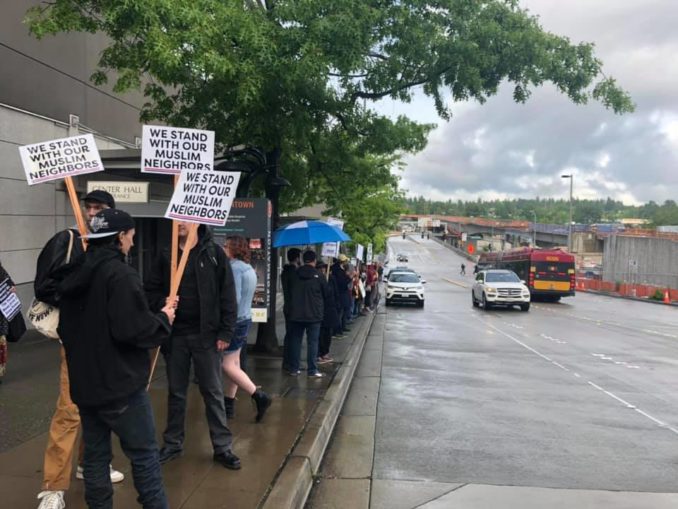 When Rep. Ilhan Omar was invited to be the featured speaker at the Washington Council on American-Islamic Relations event in Bellevue, Wash., during Ramadan May 25, she was opposed by about 40 racist Trump followers.

The misogynist, white-supremacist bigots called their demonstration to rant against Omar, Somali-American congressperson from Minnesota, because of her courageous statements in support of the Palestinian struggle, against U.S. support for the Israeli occupation, against the U.S. war on Venezuela, for Muslim civil rights and against abortion bans.

But the Community and Labor Against Fascism coalition organized an anti-racist, anti-fascist counterdemonstration, and the progressive crowd of 800 people warmly welcomed Omar and pushed the haters back. People chanted, “Hey Hey, Ho Ho, Islamophobia has got to go!” and other anti-racist slogans until the racists dispersed at the Bellevue Convention Center near Seattle.

The coalition posted a statement after their successful counterdemonstration on their Facebook page: “Community & Labor Against Fascism is proud to have been present to show our support for Rep. Omar and everyone targeted by racists, bigots and xenophobes. Many of the individuals who came to the far-right counterrally, including the notorious Proud Boys, have a track record of promoting white nationalism, misogyny and violent attacks on anti-fascist protesters. We will continue to organize community actions against these bullies and bigots, and we encourage all our friends and neighbors to join us! Together, we will show that solidarity and unity in action are our strongest weapons!”