The criminal anti-abortion network in the U.S., praised and promoted by the racist, reactionary Don in the Oval Office, was hard at work the last two weeks of May.

May 31 was the 10th anniversary of Dr. George Tiller’s murder in Wichita, Kan. — who was called “St. George” by co-workers and other abortion providers because of his compassion and empathy for women. 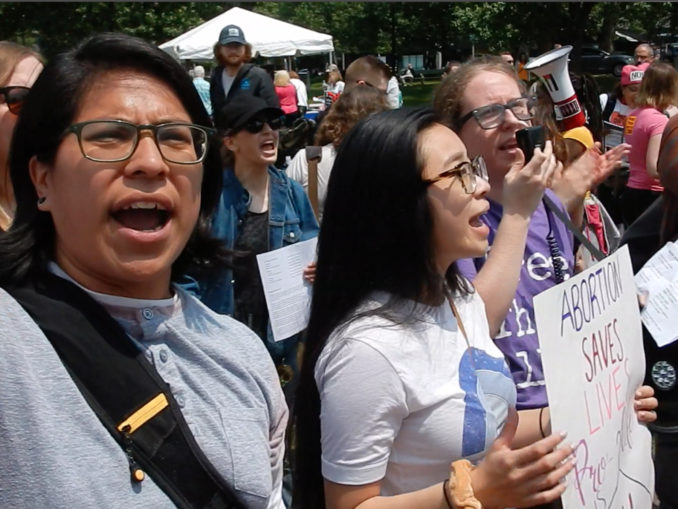 While any one of these events could merit its own article, their shared aspects is the current violent attack on the 1973 U.S. Supreme Court decision legalizing abortion, Roe v. Wade.

The so-called “abortion wars” started even before Roe. The misnamed anti-abortion “National Right to Life Committee” was founded in 1967. Now the attacks that ramped up in the 1980s have gone nuclear.

None of the current bans have gone into effect, thanks to legal intervention by the Center for Reproductive Rights, which filed May 24 to stop the Mississippi ban. The American Civil Liberties Union and Planned Parenthood filed against the Ohio ban on April 11 and the Alabama ban on May 24, and are preparing a suit against the Georgia ban.

The most heartening aspect of the fightback has been in the streets, with a massive outpouring of women, gender-nonconforming people and male allies defending Roe in 500 cities across the country on May 21. The most popular slogan everywhere is: “We won’t go back.”

Whose right to ‘personhood’?

Medically incorrect “heartbeat” bans now place the “personhood” of an embryo — not yet a fetus — above that of a woman. (Planned Parenthood calls these “six-week bans.”) This is truly a crime against women’s and gender-oppressed people’s human rights.

Willful ignorance of the reproductive process and hostility toward women, driven by religious zealots in evangelical, Roman Catholic and various “orthodox” religions, has now led to “forced pregnancy bills.” That’s what Stacey Abrams, nationally known Black politician, calls the bill in her state of Georgia.

Though Abrams’ religious family taught her abortion was wrong, she’s a leader in the fight against the bans. “[E]very woman should have a choice. … That’s the fundamental crux of this. … [It’s] a decision that women can make to determine their economic future, to determine their health care. It’s a decision they make about how they control the creation of their family.” (YouTube, June 1)

An article by Zak Cheney-Rice in New York Magazine notes that 55 percent of Black people in the U.S. live in the Deep South, where Georgia has the second-highest U.S. maternal mortality rate and Alabama the sixth-highest infant mortality rate. He notes these states have been and are politically dominated by a right-wing, white-supremacist majority. But, he writes: “Where Black resistance has taken hold in the South, it has consistently proved to be the most visible bulwark against reactionary rule.” (May 27-June 9)

According to an Atlanta Journal-Constitution poll, 49 percent of Georgia’s population opposes the anti-woman bill, compared with 44 percent who favor it. Seven out of 10 Georgians oppose overturning Roe, with 78 percent of Black voters saying abortion should be legal in most or all cases.

The African-American medical director at Alabama Women’s Center for Reproductive Alternatives, Dr. Yashica Robinson, told CNN on May 18: “As a mother and a physician, this abortion ban is deeply personal. … I am angry at the politicians who do not see women as responsible decision makers and therefore believe the care I provide should be outlawed. I am enraged that the state of Alabama would force me to choose between what is ethical and medically appropriate care, and breaking the law.”

Robinson is most concerned about how poor Black women will be affected given the Alabama Department of Public Health report in 2017: While “there were 31 pregnancy-related deaths out of 100,000 live births for white women, that number more than doubled for black women. When compared to the [Center for Disease Control and Prevention’s] national average of 12.4 deaths per 100,000 for white women and 40 deaths per 100,000 for Black women, these numbers are particularly stark.”

“We must expose the hypocrisy of the so-called ‘pro-life’ movement,” wrote Rev. Dr. William J. Barber II, a leader of the Poor People’s Campaign and member of the NAACP board, in a May 30 Nation article.

Katha Pollitt, a longtime defender of women’s right to abortion, summarized the current explosive, destructive war against women’s human rights in a May 24 New Yorker article: “Indifference to women and children isn’t an oversight. … The point isn’t to prevent unwanted pregnancy. … The point is to roll back modernity for women.”

Who will this outrageous war against child-bearing people hit the hardest under patriarchal, misogynist capitalism?

The poorest of working women and all the gender oppressed: women of color, young gig workers, im/migrants, trans and gender nonconforming people, rural residents, disabled women and those trying to survive domestic violence.

But the crisis also offers those who oppose U.S. ruling-class domination a chance to join this human rights movement and fight back. Here’s a chance to answer that old-time labor union call for solidarity: “An injury to one is an injury to all.”