The author is vice chair of the Communist League (Finland). Workers World requested he write this article for U.S. readers because its central issue, the health care system, is an important issue in the United States.

Helsinki – In Finland the right-wing government resigned in April this year, only a few weeks before the parliamentary elections, because it failed to push through a massive health care “reform.” Health care in Finland is still largely run by the public sector. 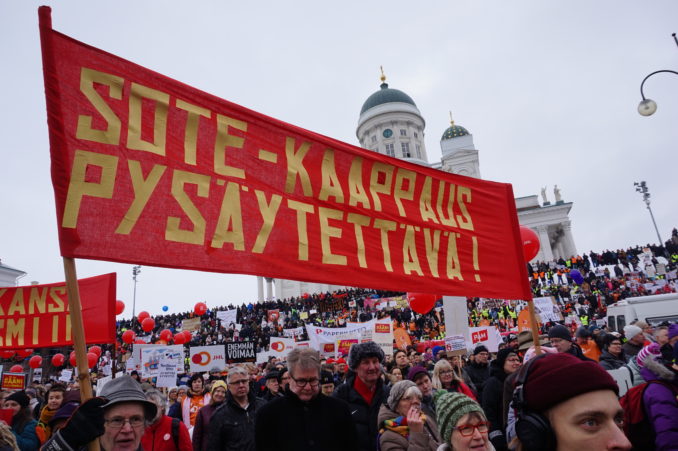 The aim of the reform was to shift the operation of the health care system, amounting to tens of billions of euros, more and more to private companies so that they would profit from it. Many of these companies are owned by foreign investors, who often transfer their money to tax havens abroad.

The government claimed this “reform” would save some 3 billion euros of taxpayers’ money, and at the same time would improve the health care system and make it more equal. Later, its spokespeople had to admit that instead of saving 3 billion, it would add approximately 3 billion euros to  taxpayers’ costs. [1 euro = $1.12 as of May 12]

It’s obvious that it would cost more, since private companies must make their profit on top of the cost of actual health care The public sector can just produce the health service without need to gain any profit from it.

Preventing this “reform” was, of course, good news for the working class here. Our party and its allies have strongly opposed this reform for many years. There have been many big demonstrations over the last four years against the right-wing government and its policies, organized by a wide coalition of anti-neoliberal forces in Finland.

We in the Communist League have been active in reminding people how important it is to fight against the health care “reform.” We see it almost as “modern-day colonialism.” Instead of conquering new continents, the capitalists conquer new sectors in society to keep their profits going up.

Our party has stated that if there should be a reform of health care, it should adopt its principles from the long forgotten 1972 legislation, the National Health Care Bill: This includes availability of health care for all, and health care that is free of charge and offers first-class treatment and care in all parts of Finland.

In 1972 the National Health Care Bill passed during the prime time of the welfare-state period in Finnish history. Some 15 years later there were new winds blowing in Finnish and international politics. Finland’s neighbor, the Soviet Union, was undergoing changes (Perestroika started in 1986) and Margaret Thatcher became the British prime minister, with her extremely hostile attitude toward the working class, trade unions and the welfare state.

The late 1980s were regarded as the years of wild capitalism, casino capitalism. As expected, in Finland it ended with a crash into a wall, and it was followed by a great depression that left some 500,000 people unemployed (out of Finland’s total of 5.5 million inhabitants).

At the time, hundreds of businesses collapsed, leaving many people penniless. Many committed suicide. It is fair to say that since then nothing has been the same in Finland.

Since the great depression in the early 1990s, the political debate has basically circled around one question: How much must the government cut public spending and from where? It’s been full austerity since.

The profits of big capital, however, have risen to a record-breaking level at the same time. Shareholders received some 14 billion euros in dividends last year, the all-time record amount. Each year this money ends up going either abroad or to Finland’s own capitalists — away from benefiting the overall economy and our public funding.

No matter what happens, however, the right-wing rhetoric remains the same: We cannot afford the welfare state any more because “there is no money.”

In Finland and Sweden there is one peculiarity compared to many other countries: The municipalities have traditionally had much autonomy to run themselves without interference from the national government.

According to many studies, the most cost-effective size of a municipality to supply public health services is around 20,000 to 50,000 inhabitants. In bigger cities like Helsinki it is much more expensive to produce health services. In spite of this, one of the aims of the neoliberal health care reform is to create very large new areas in which health services would be centered in the “capital city” of the area.

Smaller municipalities especially would lose their independence and would suffer from the reform, because it would centralize the health services into the central cities and weaken the current health services in the provincial towns and villages. For this reason the reform would be undemocratic and unfair.

Even without this massive reform, health care services have been centralized during the last couple of decades, which has weakened health care in certain areas.

Some maternity hospitals, for instance, have been closed, with the pretext that in those hospitals “there have not been enough births per year.” In neoliberal thinking, these important hospitals have been “ineffective.” Now in some areas pregnant women are at risk of not receiving proper care in cases of premature birth or other problem births.

It is also typical that women’s rights are first in line to be cut when neoliberals calculate budget cuts.

The working class here must be constantly alert to stop any attack on its successful health care system. The neoliberals have already managed to cause considerable damage to it, but this massive privatization operation would seriously jeopardize our public health care system

The good news is that these right-wing parties lost the elections held on April 14. A coalition of social democratic and centrist parties — with the Left Alliance and the Greens — is likely to form the new government.