Teruggi is an Argentine journalist and political analyst living in Caracas. This article was published May 16 in pagina12.com.ar. Translation by Workers World Managing Editor John Catalinotto.

Caracas is several different cities at once. The neighborhoods turn their backs on each other, often fear each other. In the east is the hotbed of news about Juan Guaidó and the opposition; in the west is the territory of Chavista majorities, the Miraflores Palace, the centers of power. In the east, people live in foothills, while in the west they live in mountains. 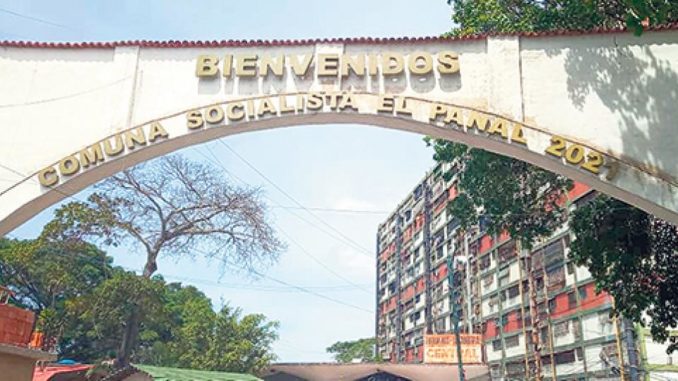 Entrance to the 23 de Enero neighborhood, one of the bastions of Chavismo on the west side of Caracas.

One of these mountains is where you find the neighborhood of 23 de Enero, where there has been a wave of popular resistance since before the emergence of Hugo Chávez. It’s there that people established several collectives, which is the name of one of the forms of Chavista organization.

The word collective has come to embody the right-wing myth meant to demonize the revolution. According to this myth, the collectives are criminal gangs dedicated to carrying out the dirty work of the state security forces, such as preventing opposition mobilizations. Republican Sen. Marco Rubio said the United States should classify the collectives as terrorist organizations.

One of the collectives is called January 23rd — that of the Alexis Vive [Alexis Lives] Patriotic Forces, named after the late Alexis Gonzalez. The organization announces its presence at the entrance to the neighborhood, where above a high arch you can read: “Welcome, Socialist Commune El Panal 2021.” Upon entering, you will find the communal bakery and follow the daily life of a popular neighborhood in Caracas with children, wearing school uniforms, newsstands, murals, motorcycles, music and people seeking shade to avoid the Caribbean sun.

“We collectives are grassroots social organizations that work in the political, social, communal, productive construction,” says Robert Longa, a representative of the Alexis Vive collective. He is sitting in Radio Arsenal, which was built in front of the communal sports court. In the January 23 Commune there are about 30 collectives, he says.

Alexis Gonzalez was assassinated at the beginning of the revolution in one of the right-wing coup attempts. Thirteen thousand people live in the communal territory, and the commune, hand in hand with the Alexis Lives Patriotic Forces, has set up organs of self-government and has focused its development on economic and social aspects of life. These include a sugar factory, a bakery, a textile factory, a collection center, a blacksmith shop, a currency of its own, a dance school, a sports school and a swimming pool for kids on weekends.

The Alexis, like other collectives, is the target of media and political attacks from the right. “They [the reactionaries] see the collectives in the neighborhoods as the pockets of [Chavista] resistance and the retaining walls of Bolivarian government. Much like the Committees for the Defense of the Revolution in Cuba, we are the focus of media and material attacks in an attempt to implode the arteries of our communities. On Feb. 27, 1989, we came down from the mountains, and on April 11, 2002, we also came down. We played a fundamental role in the seizure of power, and I can surmise that the reactionaries see the collectives as the cornerstone to generate the social explosion they seek,” he says.

The sector of January 23rd that houses the Patriotic Forces and the Commune Panal 2021 is calm. The organization manages to provide answers to problems such as insecurity and tackles the daily struggle represented by the economic situation.

The picture is complex among the popular masses in Caracas and even more so in the cities far from the capital. This is a product of the economic and financial blockade declared by the United States and also of its own errors: “We make mistakes, but we think that the dirty laundry of the revolution should be washed internally; inside the revolution we should make any changes necessary, outside the revolution nothing,” says Longa.

The day I visited, an activity took place in the field: The Ministry of People’s Power in the Communes delivered tools for production. Communes from the west of Caracas came to the activity. The people debated about the economic situation, about the difficulties and necessities of maintaining production of goods, about prices, about the meetings between the United States and Russia — all this can take place [even] in a context of such instability, as long as the popular organization plays a central role within the structure of Chavismo to build and defend the country.

“We always knew that this moment would come, that sooner or later we would have to face the empire,” Longa says. “We can expect everything from them; they bet on surgical operations ranging from assassination to the imprisonment of the president; they seek to generate friction in the Bolivarian National Armed Force to achieve a rupture that will lead us to a civil war; they put U.S. contractors [mercenaries] with Colombian paramilitaries to generate Syria-like scenarios.”

Power of the people

Political time in Venezuela offers few moments of surface tranquility, although in this area, as in most of western Caracas, Guaidó’s emergency never translated into mobilizations of support for him. Chavismo has deep roots — of identity, cultural, organizational: “The proof that Chavismo exists is the popular rank and file and is the resistance that we have had in this period, which has consolidated Chavismo. The people are convinced that the strategic line that Chávez proposed is the correct line. The communes, the power of the people will prevail — regardless of the mistakes of some leaders who are gambling on the stagnation of the revolutionary process, which are part of the contradictions of the process,” says Longa.

At any moment, time can speed up again like a gunshot. The Alexis Vive Patriotic Forces know this. Like so many forms of popular organization, Alexis Vive has been declared a target by the campaign that not only seeks to overthrow Maduro, but also to reshape society. These reactionaries would eliminate the Chavista rank and file who learned to play a leading role in politics. Longa is one of the thousands who are convinced that the reactionaries will fail: “Venezuela is a country carrying the traditions of liberation based on spilling the blood of tyrants,” he says.