The General Director for U.S. Affairs of the Cuban Ministry of Foreign Affairs spoke May 3 to a meeting of solidarity activists from the U.S. in New York City.

Carlos Fernandez de Cossio alerted the solidarity movement with Cuba about the Trump administration’s increasing attacks against the Cuban Revolution. The current threat is that Washington will tighten the Helms-Burton Law, which imposes economic sanctions, if Cuba does not break its ties with Venezuela. 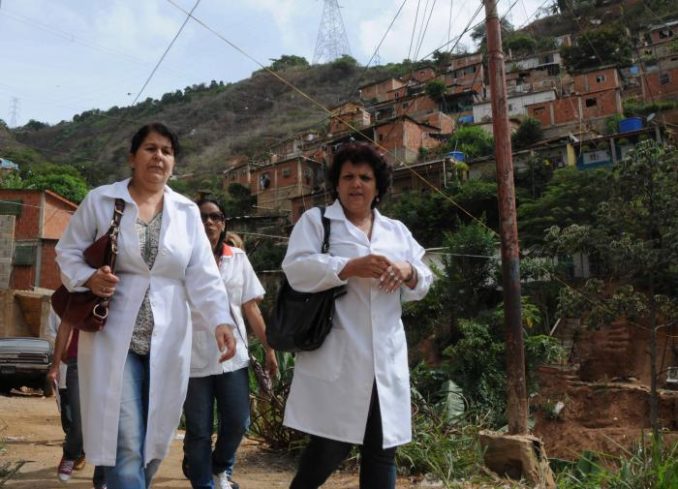 Earlier in the week, De Cossio was interviewed by Andrea Mitchell on MSNBC. The interview came after U.S. Secretary of State Mike Pompeo accused Cuba and Russia of “intervening” in Venezuela. Mitchell opened her interview by calling President Nicolás Maduro a “dictator,” her comment demonstrating the media’s complicity in the U.S. disinformation campaign against Venezuela.

It is Washington that has been dangerously but unsuccessfully intervening in Venezuela with the goal of overturning the Bolivarian Revolution.  Its aim of ousting President Maduro has failed time after time.

De Cossio told the New York City crowd that solidarity between Cuba and the Bolivarian Revolution will never be broken. Washington is demanding that Cuba “withdraw Cuban troops” from Venezuela — but Cuba has no troops in Venezuela, he said.

Instead, in keeping with Cuba’s decades-long solidarity missions, it has 20,000 doctors in Venezuela, of whom 64 percent are women.  These doctors do not stay in some fancy hotels or military barracks. They live and work in the very communities where they are assigned. They live among the people they serve, just as they do in Cuba, an idea foreign to the U.S. population.

Washington’s threats are not empty. The Trump administration continues to warn that it will tighten Helms-Burton if Cuba does not break ties with Venezuela. Cubans have called this “political blackmail.”

The Helms-Burton Act was passed in 1996 during the Bill Clinton administration. Cuba experts consider it one of the most regressive and draconian of U.S. foreign policy initiatives.

Washington passed the act to place a stranglehold on Cuba’s economy.

That was when Cuba was experiencing one of its most difficult periods, which they described at the time as the “special period.” This refers to war-like conditions in times of peace.

The socialist camp had just collapsed, and Cuba lost many of its most favorable trading partners, adding up to a whopping 85 percent of its trade.

Shortages such as food and oil abounded. There was actual hunger at the time.

U.S. imperialism passed Helms-Burton precisely at that moment, with the view that if it tightened the blockade established in the 1960s, it would lead to mass chaos and social unrest in Cuba.  Washington predicted that hungry Cubans would rise up against the socialist government.

Once again imperialism misjudged the Cuban masses and their leadership. That social unrest never happened. Instead the country became ever more united and determined to carry on its socialist project.

If any capitalist government lost 85 percent of its trade and the economy dropped so dramatically, there would be unrest and troops in the streets against the workers.  But not in Cuba, where Cubans tell us: “The government and the people are one.”

According to the March 14 article, “Helms-Burton Act Meant to Recolonize Cuba,” in the Cuban newspaper Granma, “The Trump administration is dusting off the law’s Title III to tighten the blockade and dissuade foreign investors in Cuba.”

Title III has been the most controversial part of Helms-Burton. De Cossio explained that the provision “allows for U.S. companies and individuals to sue in a U.S. court” and resurrect the issue of U.S. property “confiscated in Cuba.”  U.S. companies and Cuban Americans are demanding compensation for property nationalized by the Revolution.

De Cassio pointed out that the factories and other property nationalized by the revolutionary government and put into the workers hands “were all offered compensation. Mexico, Spain and other countries were compensated.” But the “U.S. and the Cuban Americans who left refused to negotiate.”

Since passage of the law, Title III has been waived repeatedly. Trump, however, announced he would not be waiving it anymore.

The BBC reports, “According to data from the U.S. Justice Department, Cuban-Americans who say that their properties were seized during the Cuban Revolution have filed more than 200,000 claims. The U.S. government has ‘certified’ around 6,000 cases of American citizens or companies who also say that their properties on the island were taken away from them after 1959.” (May 3)

For over 60 years, every imperialist attempt to undermine socialism in Cuba has failed. Trump may take the issue of nationalized property to a world court, but the Cubans have given their answer to the U.S. time and again: “Socialism or death!”

The U.S. movement in solidarity with Cuba must stand up to oppose Helms-Burton now more than ever. Just like the ties between Venezuela and Cuba, this solidarity will never be broken.