Students, faculty and community members are in ongoing struggle against racism at the University of Georgia at Athens — and also at Kennesaw State University. These struggles are linked to Kennesaw’s current president, Pamela J. Whitten, who was previously provost at UGA. At both locations she has been conspicuously unresponsive to opposing racism. 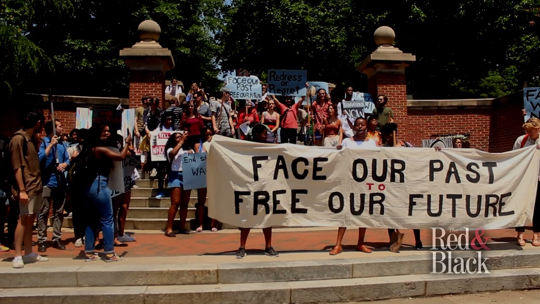 At the University of Georgia-Athens on April 29, students, faculty and community members protest the school’s failure to address its history of slavery.

In 2015 the remains of enslaved people were found near UGA’s Baldwin Hall during an expansion project of the building. In 2016 the Franklin College Senate Ad Hoc Committee on Baldwin Hall released a 31-page report condemning UGA’s lack of accountability for its connections to the institution of slavery. The report states that UGA administrators allegedly intimidated faculty conducting research on slavery.

The Baldwin Hall report relates that UGA professor Scott Nesbit was told by an unnamed administrator that then-UGA Provost Pamela Whitten was “not happy” with critical remarks he made about the university’s failure to respond. Allegedly, Whitten “was considering measures that would make it impossible for [Nesbit] ever to gain employment at other universities.”

Nesbit is an assistant professor of history, specializing in the U.S. South and issues of race and slavery. According to the report, UGA administration found Nesbit’s comments to be a form of “activism” and thus unacceptable.

Whitten became president of KSU in June 2018. The allegation of Whitten’s intimidation of faculty at UGA, added to her current administrative nonresponse to matters of racism, comes at a time when KSU students have been repeatedly calling on Whitten to do something about racism on the KSU campus.

In fall 2017, KSU cheerleaders took a knee as the U.S. national anthem played during a school football game. The following year, all five of those who knelt were cut from the squad. After that and other racist incidents on campus, KSUnited was formed. (See Workers World, Feb. 28)

Activist group KSUnited has called on Whitten to publicly release a statement condemning racism and asked that the president support a taskforce to create an anti-racist education center. According to the KSU student newspaper The Sentinel, throughout the school year Whitten refused to release a statement condemning racism, even after being asked directly by student leaders. (April 15)

Finally, in an email sent to KSU students on April 22, Whitten managed to state that she has “no tolerance for any form of discrimination or racism on our campuses.” Despite this, Whitten has not committed herself to meeting with student activists, nor has she expressed any support for the creation of an anti-racist center, saying she needed “documentation” that the center had been planned institutionally.

At an April 26 meeting with Whitten, KSUnited activists brought documentation showing an anti-racist education center was included in campus building plans. But Whitten still would not commit.

KSUnited activists have made it clear that their struggle against racism will continue, vowing to fight until Kennesaw State University is safe for people of color, women, people in the LGBTQ community and other marginalized groups.

Meanwhile, at the University of Georgia-Athens, where a racist fraternity video rocked the campus this spring, the Coalition for Recognition and Redress continues to demand the university acknowledge its complicity and connection to slavery and institute concrete reforms to serve those directly impacted by that history.