Teaching and graduate assistants’ baseline salary had been $18,000, from which they had to pay $2,000 in university fees. While management claimed the workers had received raises, the fees were indirect pay cuts. (Chicago Sun Times, April 6) Open negotiations lasted two days. Although workers had agreed to a new contract late on Thursday, April 4, the union knew there were still outstanding issues — such as how workers could recoup lost time — so they kept striking. On Friday, undergrad students joined their teaching and grad assistants at a rally protesting the university’s mishandling of negotiations.

Finally, the university agreed to allow the workers to make up any hours missed during the strike. Management also agreed to GEO’s demand that hiring discrimination based on citizenship or immigration be barred. (uic-geo.net, April 5) U.S. education workers continue to lead the class struggle. 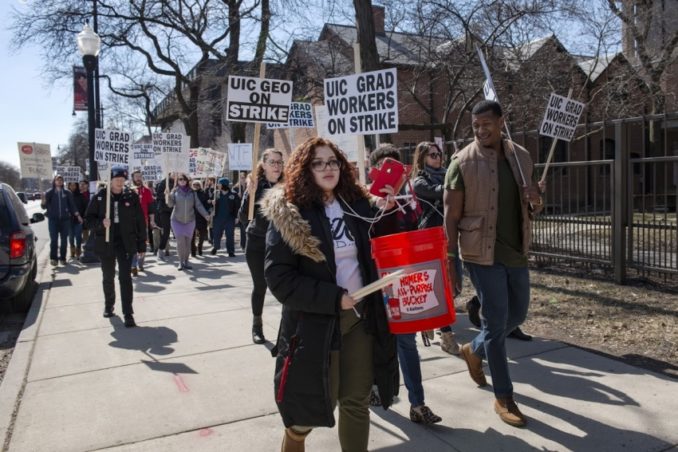 University of California workers on the move

The enormous University of California system, with 10 campuses and five medical centers, has been seething with labor struggles in 2019. American Federation of State, County and Municipal Employees Local 3299, representing 8,300 custodians, food workers, gardeners and other campus service workers, reached a contract in late February, ending the most tense labor situation facing UC up to then. Negotiations had dragged on for over a year, with the union holding a one-day walkout in November. The agreement calls for an immediate 4.5 percent pay increase as a signing bonus and across-the-board 3 percent raises annually through 2019, plus an additional 2 percent each year for many employees in certain longevity and pay categories. Language to ensure safe staffing levels was added.

In a separate bargaining unit, 13,000 patient care technical employees — respiratory therapists, nursing aides and radiology technicians — at all UC medical centers and its many health clinics still await a contract. And 800 medical residents, interns and fellows at UC Davis Medical Center signed up to join the Committee of Interns and Residents; they’ve asked the state’s Public Employment Relations Board to register their union.

Dare to struggle, dare to win!

Communication Workers (CWA) Local 1180 reached a settlement with New York City April 2 resolving a longstanding gender and racial pay-discrimination lawsuit covering administrative managers, who are predominantly Black women. The $15 million accord covers 1,600 active and retired Local 1180 members on the job from December 2013 through 2017.

“Local 1180’s path to the finish line started more than two decades ago,” union President Gloria Middleton told a cheering crowd on City Hall steps April 2. “It’s been a long path, a complicated path, a frustrating path. But today we can finally say it’s been a successful path.” (WW to cover struggle in detail in future issue.)

Judges and decision makers agree that the workers at the Wabtec Plant in Erie, Pa. — who launched a historic strike from Feb. 26 to March 6 — had been locked out. (WW, March 6 and 15) United Electrical Workers Local 506 had insisted that was the case. “We offered to work under existing terms and conditions, and the company said no,” Local 506 President Scott Slawson told the April 3 Erie Times. “It’s a joint merger between General Electric and Wabtec. We view [Wabtec] as a clear successor.” But once the merger happened, the company wouldn’t honor the old contract. That’s called union busting.

The Harrisburg ruling in favor of worker justice means that the workers who filed claims will be paid for at least part of the time they were picketing, and unemployment compensation that the workers filed for has been approved. Even the Pennsylvania Department of Labor & Industry’s Office of Unemployment Comp realized Wabtec was reckless! And really greedy!