On April 5, during a presidential visit to the southern border in Calexico, Calif., President Donald Trump told migrants and the world: “Our country is full. We can’t take you anymore.”

Indeed, the U.S. is full: Full of s–t.  More precisely, it is full of white supremacists in the White House. 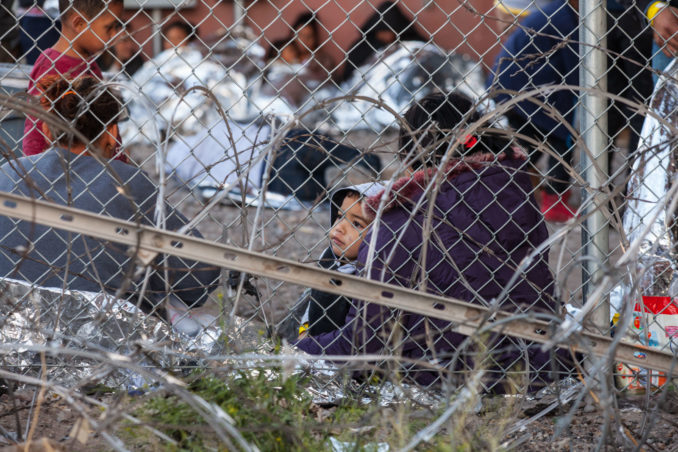 As the 2020 presidential election approaches, Trump is becoming ever more agitated about his bedrock issue, immigration, and his evident aim of excluding all migrants and refugees of color from entry into the U.S.

He has become so frustrated that his goals are not being implemented, that he recently carried out a major shakeup in his administration so he could go in a “tougher direction.” (Vox, April 10)

Trump fired Department of Homeland Security Secretary Kirstjen Nielsen on April 7. Did he fire her because she was not doing a good enough job in carrying out his draconian plans against migrants?

Not exactly. He fired her because she did not go far enough, potentially breaking the law to carry out his racist aims.

Nielsen is no saint.  Under her administration, families were separated and children caged — and then lost in the system. Under her watch, several migrants have unnecessarily and tragically died.

But it seems the one thing Nielsen wouldn’t do for Trump was risk going to jail by breaking the law.

Trump is frustrated that current laws and the U.S. Constitution are hindering him. But Washington bureaucrats, and the capitalist class in general, break the laws or ignore the Constitution when it suits them.

When it comes to defending their interests — when it comes to making sure the capitalist system continues to run smoothly — they are quick to invoke the law’s sanctity.

So when Donald Trump threatened to close the southern border, what stopped him?  Not the people’s movement, or the migrants languishing at that same border.

The New York Times noted on April 4 that “economic experts” warned Trump that closing the border would damage the U.S. economy: “Nearly $1.7 billion of goods and services flow across the United States-Mexico border every day, according to the U.S. Chamber of Commerce. About 500,000 legal workers, students, shoppers and tourists also cross the border daily.”

When Trump threatened the border shutdown, corporate lobbyists immediately, and furiously, got to work to inform him that within 48 hours of closing the border, the economic effects would be “disastrous.”

They were not talking about U.S. consumers missing their avocados, though that impact made the news.

What did not get publicized is that billion-dollar businesses with plants in the U.S. and Mexico, like General Motors and Ford, depend on uninterrupted production using parts that cross the border. Mexican workers manufacture these for wages that are a fraction of U.S. autoworkers’ pay.

So if the big capitalist companies couldn’t get their parts into the U.S. because of a closed border, they were going to damn well stop Trump.

And stop him they did.

Where is Trump heading?

The Nielsen firing must set off alarm bells to the progressive and working-class movements. Trump could easily unleash even more criminal, racist and atrocious acts against migrants and refugees.

Trump and his white supremacist cohorts want to rip every human and civil right from migrants and refugees. They aim to recolonize all oppressed people in the U.S.  For migrants allowed to remain, this would be to control and dominate their labor, both in and out of prisons.

These acts could conceivably mount to war crimes.

The present attacks on migrants and refugees are in the same genocidal current as centuries of U.S. crimes against Indigenous peoples; as the continuing crime of mass incarceration against Black and Brown people; as the occupying crime of police terror in primarily Black neighborhoods.

It is not inconceivable that just as Native children were torn from their parents’ arms and placed in white homes, so too Central American and other refugees could have their children taken and placed in foster homes — if Trump and company have their way.

Immigration experts of all kinds are beginning to speak out in an unprecedented fashion. Not known as revolutionaries, as progressives or even as anti-system, many are horrified by the turn of events, as immigration judges are being removed or disempowered, and as more racist anti-immigrant officials are put in place.

According to international and U.S. immigration law, Central American refugees currently fleeing U.S.-created violence are eligible for asylum. Trump aims to overturn this one way or the other, threatening to change asylum law through presidential administrative power to circumvent Congress.

Trump, Stephen Miller, a chief immigration advisor, and Kevin McAleenan — who became acting head of the Department of Homeland Security on Nielsen’s departure — are floating a policy idea that some journalists have called “Sophie’s Choice.”

Also called “binary choice,” this policy would allow parents to “choose” either to be separated from their child or to be in detention with their children. If the parent chooses that their child not be detained, the child (or children) could apply for asylum — alone.

In response to former Attorney General Jeff Sessions’ “zero tolerance policy,” a federal court ruled in 2018 that DHS could not separate families.

The binary choice would undo that ruling — another reason why Trump wants new judges.

Doris Meissner, former head of the then named Immigration and Naturalization System under the Clinton administration, told the New Yorker April 9 that Trump is “stymied by the other branches of government,” such as the courts and Congress.

Under Meissner’s watch, the border was also militarized, and undocumented workers were also terrorized, especially Mexican workers. But Meissner is one of those pro-system liberals who feel Trump is “going too far.”

Meissner pointed out that having so many “acting” officials in the Trump administration is worrisome to her. These appointees are accountable to no one and have never gone through a congressional vetting process.

Revolutionaries understand that this vetting process is cosmetic. But note that Trump told Kevin McAleenan (at the time commissioner of U.S. Customs and Border Protection) he would “grant McAleenan a pardon if he were sent to jail for having border agents block asylum seekers from entering the U.S., in defiance of U.S. law.” (CNN, April 12)

This message can easily be interpreted — correctly — as a signal to the now “acting” DHS secretary to do whatever the hell the president wants, laws or no laws.

Trump also told Border Patrol agents in California “not to let migrants in. Tell them we don’t have the capacity. If judges give you trouble, say, ‘Sorry, judge, I can’t do it. We don’t have the room.’” (CNN, April 8)

A Trump defeat is needed

A victory for Trump’s war on migrants and refugees will not only be a setback for the fundamental rights of the undocumented — rights they have earned a thousand times over.

A victory for Trump in this war will also be a setback for all struggles.

From the fight to raise the minimum wage, to the push to punish corporations for climate change, the struggle for migrants is part and parcel of all progressive struggles.  A victory for one is a victory for all.

A victory against Trump is needed, not at the election polls, but in the streets and in the court of public opinion.

Immediate asylum for refugees, no deportations, full rights for the undocumented must resonate on May Day 2019.

Every struggle should fight for these demands.