Patriarchal diehards in state legislatures across the country are bound and determined to criminalize what should be a private decision between a woman, a girl or a gender-oppressed individual and their doctor. The target of their new legislation is to kill the now-still-legal right to terminate a pregnancy. 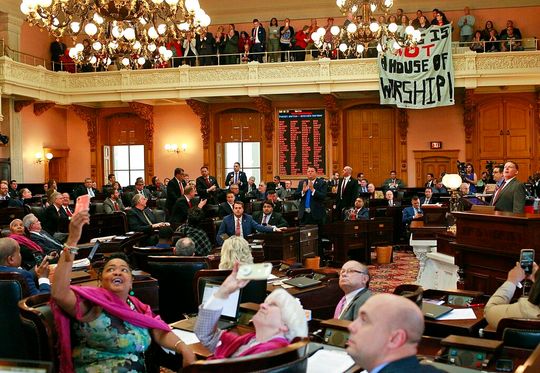 Brazen misogynists, pining for the days when a woman was a man’s legal property, want to roll the clock back and not only deny access to legal abortion but to contraception. In their fantasy world, Roe v. Wade, the hard-fought 1973 Supreme Court ruling legalizing abortion, is already shredded.

On April 10 Ohio became the sixth state to pass a so-called “fetal heartbeat” bill. When the bill goes into effect in July it will be illegal to obtain an abortion after the sixth week of pregnancy — often before pregnancy is even detected. Doctors who perform the procedures could face felony charges, with up to a year in prison and $20,000 in fines. There is no exception for rape or incest.

Gov. Mike DeWine wasted no time in signing the bill as soon as it landed on his desk April 11, despite the fact that state and federal courts have deemed these laws unconstitutional in Arkansa, Iowa, Kentucky and North Dakota. Similar bills are in various stages of the legislative process in five other states; Georgia passed one on March 29, which the governor could sign any day. (WW, April 4)

The law is misnamed. According to the Cleveland Clinic, it is only “after the eighth week [that] your baby is called a fetus instead of an embryo.” At that stage the embryo is smaller than a pea, and the brain and nervous system are undeveloped. The fact that a heartbeat can be detected via ultrasound is being used to equate abortion with taking a life.

Ohio Senate Bill 23, now wrongly titled “Human Rights Protection Act,” is just the latest of a slew of state anti-choice bills being passed across the country. Over 20 such bills have passed in Ohio alone since 2011. These bills have deterred women from seeking abortions, causing the number of women’s clinics which provide the procedure to drop from 16 to nine in eight years.  They are all located within six metropolitan areas.

Many women have to travel to have an abortion. A mandatory 24-hour waiting period means having to pay for an overnight stay where the clinic is located, plus transportation, meals, child care and other expenses. These costs, on top of the cost of the abortion itself, are an imposition on poor women, especially women of color, low-wage workers, immigrants, youth, women in rural areas, disabled women and domestic violence survivors.

Angry reproductive rights activists held militant protests inside and outside the Ohio Statehouse while legislators were voting on the law. The Ohio chapter of the American Civil Liberties Union, representing reproductive rights advocates, has sued to have SB23 overturned.

The organized Christian right is pushing these bills, knowing full well they cannot survive a legal challenge while Roe v. Wade remains law. Their strategy is to carry their legal fight to the U.S. Supreme Court, with the goal  of getting Roe overturned. Their optimism was bolstered with the appointment of right-wing woman-haters Neil Gorsuch and Brett Kavanaugh to the high court.

As Ohio State Rep. Ron Hood stated, “Will there be a lawsuit? Yeah, we are counting on it. We’re excited about it.” (wosu.org, April 11)

These anti-choice bills are part of a broad political agenda that includes “religious freedom” exemptions to allow anti-LGBTQI2S discrimination and laws giving their version of Christianity privileged status. Emboldened by the presidential election in 2016, Christian nationalists launched a legislative campaign called “Operation Blitz.” Since then, states have passed a multitude of legislative assaults on LGBTQI2S communities, religious minorities, women and gender-oppressed people.

Religious bigotry, especially Islamophobia, is stoked by laws espoused in the 148-page manual of Operation Blitz. Five states now require the display of the motto “In God We Trust” in public buildings, including schools. Others allow or require the teaching of “Biblical literacy.”

Operation Blitz has organized “Prayer Caucuses” in about three dozen state legislatures. The manual’s newest section is titled “Talking Points to Counter Anti-Religious Freedom Legislation.” In his exposé “Blitzing to Dominion,” Frederick Carlson explains, “This section insists that there cannot be inherent civil rights regarding ‘sexual orientation’ and ‘gender identity’ because the terms are said to be too vague and there is too much disagreement over their meaning.” (politicalresearch.org, April 11)

After an oppressive bill is passed, one even more ominous is presented. Just days before Ohio’s abortion ban became law, Texas saw the introduction of a far more extreme bill that would allow the death penalty for women who have abortions and doctors who perform them.

Cristina Vega, with South Texans for Reproductive Justice who volunteer at Whole Women’s Health in McAllen, Texas, told Workers World: “I think it’s ridiculous how people value the ‘lives’ of fetuses — they call them children but they don’t have feelings, they don’t even know that they’re alive — over women who are alive, who do have feelings, who know that they are alive, who are just trying to make the best decision for themselves and for their families. They would be put to death by supposed ‘pro-lifers.’”

Vega added that this is “extremely hypocritical,” given that Texas has the highest rate of execution in the country — with 560 people put to death by the state since 1982. 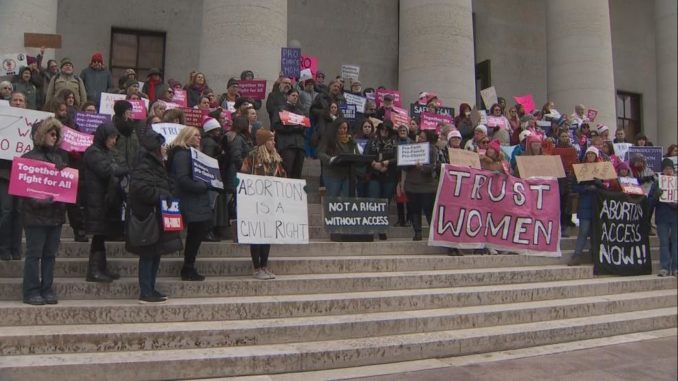 The anti-reproductive rights bills are largely passed and signed by Republican-majority legislatures and Republican governors. To secure their passage, bill supporters have mounted an ideological assault that shames both women who seek abortions and their physicians. They wrongly refer to embryos and fetuses as “babies,” deliberately conflating legal abortion with infanticide or even genocide.

The goal is to make such unscientific and stigmatizing language part of the culture. Democratic legislators, seen as allies of the pro-choice movement, have occasionally capitulated to this mindset. In 2015 Ohio Democrats all voted for a bill that prohibited state funding for abortions, under the guise of providing first-time state funding to rape crisis centers. However, these centers cannot use those funds to offer abortion referrals to rape victims.

This year, Democrats, who unanimously opposed the heartbeat bill, had nevertheless voted minutes earlier for a state Senate resolution “to urge the Congress of the United States, as expeditiously as possible, to enact a Born-Alive Abortion Survivors Protection Act.” This largely symbolic act was intended to shame anyone who has an abortion and to falsely equate late abortions with murder.

Clearly, it’s not enough to vote for “pro-choice” politicians. It took a movement in the streets to force the passage of Roe v. Wade in 1973, and it will take a mass movement — one allied with all oppressed groups being targeted by hateful legislation and rhetoric — to keep it from being overturned.