Atlanta activist Oscar Cain Jr. was shot and killed by police in the early morning hours of March 31. 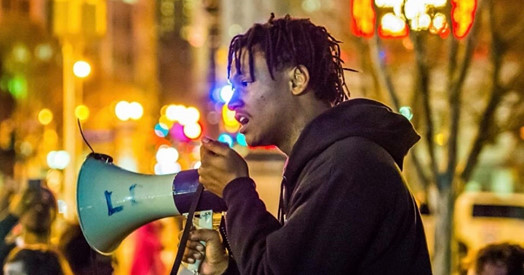 Cain, an activist for racial justice and yet another victim of Atlanta police.

The police say someone flagged down a patrol car, claiming to have seen a man with a gun near the Metropolitan Avenue ramp to I-85. Oscar Cain, who lived in the area, was spotted and the officer attempted to arrest him, according to the police report.

Cain fled into a dark, wooded area pursued by the cop, who claims he saw a gun in Cain’s hand and fired, killing him.

The news of his death shocked many hundreds of community organizers and activists who had worked with Cain since he was in his early twenties.

A neighborhood kid who loved music and could rap, played basketball and couldn’t afford to go to college, his leadership skills brought him to the attention of seasoned community organizers. His big, welcoming smile was a clue to his generous, lively personality.

In 2010, he was named the Atlanta Field Director for the League of Young Voters Education Fund, a position that saw him travel across the country, speaking on voting rights, education reform, housing equality and racial justice. He went door-to-door, talking to people and listening to what they had to say about these issues.

He joined a number of other organizations. But several years later, with the GenY Project of the American Friends Service Committee, Cain took the lead in a campaign to force the Atlanta Police Department to equip police with body cameras — as a way to end the reliance on the police version of what had happened in cases of deadly force.

He traveled to Ferguson, Mo., to support that community in their demand for justice for Michael Brown.

Cain was in the front lines of numerous demonstrations and marches in Atlanta in which youth, outraged by the unending police murders of Black people, locally and across the country, shut down major streets and interstates.

He had two much-loved children, Malicah and Sky. His son was often at his side at rallies for social justice.

Cain’s funeral was attended by hundreds of family members, childhood friends, neighbors, members of the many organizations he had worked with, and those who had been in the streets with him to declare Black Lives Matter.

Although Cain had been instrumental in the campaign to equip APD members with body cameras, the officer who killed him had not turned his on.

There is no video to let us know if this was a cop who had threatened Cain in the past and who was aware of his political activities. There is no picture of Cain with a gun in his hand, running in a dark, wooded area.

There is no audio of the exchanges between Cain and the officer who shot him.

Oscar Cain Jr., 32 years old, was the 26th person killed by police in Atlanta in 2019 — in less than a third of a year. The record was just last year, when 48 people died from police deadly force.

A campaign to call Mayor Keisha Lance Bottoms and Atlanta Police Chief Erica Shields to demand the firing of any officer who fails to activate their body cameras when engaging with the public has been initiated by Cain’s friends and family.