This article was published on April 12 on pagina12.com.ar. Translation by Michael Otto.

For the third time since January, the United States has convened a meeting of the United Nations Security Council to address the issue of Venezuela. The goal this time was to get Juan Guaidó recognized as the country’s interim president.  Vice President Mike Pence, representing the first government to take the floor, proposed this goal: “The time has come for the United Nations to recognize Interim President Juan Guaidó as the legitimate president of Venezuela and seat his representative in this body.” (tinyurl.com/y4jrrxbp) 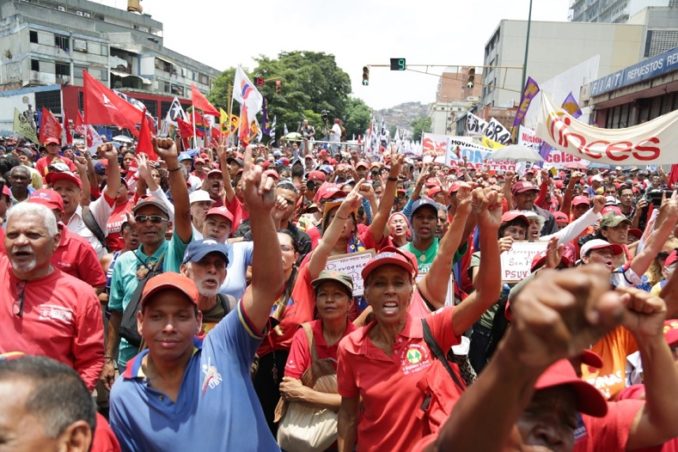 Seventeen years after the popular rebellion, Venezuelan people commemorated the Day of National Dignity on April 13, 2019 in Caracas

The absurd rationale Pence used to formulate his request was U.S. recognition of the National Assembly as the only legitimate Venezuelan government institution, and of Guaidó as president until new elections are held. Pence outlined the narrative which Washington is promoting to justify its new attacks: “Venezuela is a failed state, and as history teaches, failed states know no boundaries. Drug traffickers, criminal gangs, even terrorists like Hezbollah are exploiting the chaos in Venezuela to gain a foothold.” Both arguments have been heard before. As could be expected, this and other positions were presented by the U.S. in previous meetings.

Through its ambassador to the Council, Vasily Nebenzia, the Russian Federation opposed the “interference of the United States in other states.”  He denounced the attacks on Venezuela and the various types of robbery that are being perpetrated against the country. He also assailed U.S. cynicism, “because on the one hand they have got [Venezuela] by the throat with sanctions, but simultaneously they promote international assistance. … The political situation can only be resolved through a national dialogue, but Guaidó is not willing to open a dialogue because he has not been given orders to do so.”.

The government of the People’s Republic of China also advocated a dialogue between the parties.  Ambassador Ma Zhaoxu said: “China opposes military intervention in Venezuela and it opposes the use of humanitarian aid for political purposes. Unilateral sanctions will only worsen people’s daily lives, and will not bring peace to the country.”

Several countries, such as France, Germany and Britain, shared a common stance, which reaffirmed their recognition of Guaidó as Venezuela’s official president, and declared that “as interim president in full respect of the Constitution, he could organize free and transparent elections.” This solution went along the lines of the International Contact Group.  This resolution, which was invented abroad, was taken up behind Maduro’s back.

Venezuelan Ambassador to the U.N. Samuel Moncada denounced the U.S.-planned attack. He said it was applied to commit “deliberate economic destruction, aggression using financial instruments and by abusing its dominant position in the markets to create unjustified pressures.”

Moncada asserted that the solution, “should not be interventionism or contributions from criminals or conferences of patrons who conceal the looting they have committed. They should return the [stolen] funds, end the blockade, halt the sabotage of our infrastructure and stop threatening military intervention.”

As in the two previous meetings, the final result was predictable. Agreement was impossible, as blocks were aligned around the same hardened positions. The meeting convened by the U.S. appears to have been intended to keep the issue of Venezuela on the international agenda and to deepen the discourse around the humanitarian crisis and the “failed state.”

[In the U.N.], it was impossible [for Washington] to achieve the result obtained on April 9 at the Conference of the Organization of American States, where Guaidó’s envoy was recognized in place of the Venezuelan representative with the support of 18 votes [a simple majority of the 34 members]. Mexican Foreign Minister Jorge Lomónaco described that result as a “Pyrrhic” victory that undermined the OAS as an institution.

While the U.N. Security Council was in session, the Venezuelan right wing was calling for the second day of its so-called “Operation Freedom,” with protests located in different parts of Caracas, the capital, and the country. The protest’s results reconfirmed the downward trend in the opposition’s capacity to mobilize around Guaidó, and its inability to build up expectations that will excite people within the opposition. Its propaganda has stumbled into a crisis zone, particularly because of the gap between the promises [of regime change] and the conversion of those promises into concrete reality.

The next steps in Washington’s agenda are highlighted by U.S. Secretary of State Mike Pompeo’s visits to Chile, Paraguay, Peru and Colombia, including the border city of Cúcuta, on Sunday [April 14]. Pompeo, who repeated [Obama’s lie] on April 11,  that “the Maduro regime is a real threat to the United States of America,” will seek agreements on the imposition of economic sanctions and diplomatic isolation. The possible use of military intervention has been ruled out of the proposed options by all U.S.allies..

For example, Elliot Abrams, U.S. Special Envoy for Venezuela, met on Wednesday [April 10] with representatives of Spain’s administration, including José Manuel Albares, diplomatic advisor to the government, and Juan Pablo de Laiglesia, Secretary of State for International Cooperation.  Spain’s representatives expressed “the need for a democratic solution to the very serious crisis the country is suffering” and stressed that “the current situation in the Caribbean country requires a political, peaceful and democratic solution that categorically excludes the use of force.”

While the coup strategy isn’t advancing, the Venezuelan government publicly consolidated its efforts for cooperation in a meeting with the International Committee of the Red Cross. The organization’s president, Peter Maurer, expressed his willingness to work jointly with Venezuela on developing an aid plan that is apolitical and neutral — without defining the needs of the country as a “humanitarian crisis.” The priority areas for aid will be Caracas, the border with Colombia and the state of Bolívar, bordering Brazil.

The joint work between the Venezuelan government and the Red Cross is important in two crucial ways — first, by creating responses to existing difficulties within the country. The Chinese government has been doing this in cooperation with Venezuela, as shown by China’s  delivery of 65 tons of medicines on March 29.

Secondly, it removes another aspect of the right-wing’s narrative, which claims that the government will block any kind of social relief. Now the problem for the right wing that no longer recognizes Nicolás Maduro as president is that it has no more cards to play. Three months after the beginning of his new term, it seems to have run out of tricks. That’s why Pompeo, Abrams and Pence have once again publicly taken the lead.