Original published on pagina12.com.ar on April 10. Translated by Michael Otto.

The assault was supposed to be short — Maduro’s government would be unable to resist. Based on this certainty, the United States government unleashed a strategy to overthrow [the Bolivarian government].

Washington put up Juan Guaidó as President 2.0, provided him with a fictional government, international recognition and an elaborate narrative articulated by the mass media, and fast-tracked economic sanctions at different levels.

Lining up all these ducks in a row was supposed to produce results, until a forced negotiation or a resignation [of the current Venezuelan government] took place. 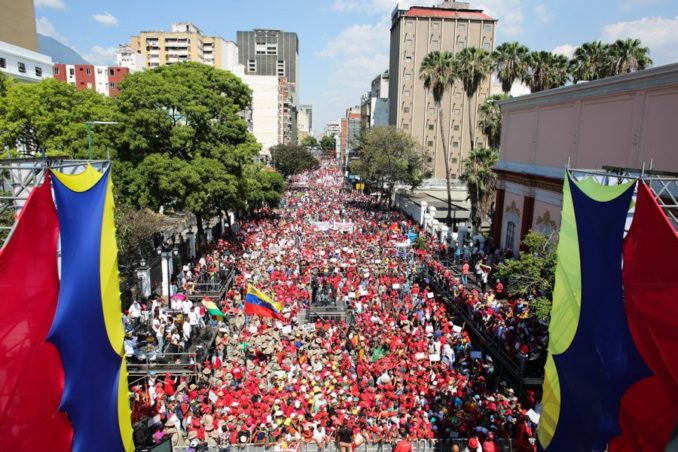 Events failed to follow the script. The first and foremost step was to be the breakdown of the Bolivarian National Armed Forces (FANB), a necessary core element. In the attempt to succeed, a series of tactics were put into play from internal conspiracy by offering dollars, visas and guarantees [to deserting soldiers] to the lurking threat of possible U.S. intervention. There was a mix of bluff — i.e., an empty pistol pointed at the head — combined with precise target dates for attempting to break the FANB, as was the case on Feb. 23.  But [the U.S. and co-conspirators] failed to pull this off.

The second event that was supposed to take place, with less room for precision in its scope, was massive support for Guaidó in the streets. His rhetoric asserts that 90 percent of the population supports him. But images from Jan. 23 — the day of his self-nomination, recognized by a Donald Trump tweet — showed his ability to mobilize this support had lost momentum.

One of reasons for his [inability] is a crisis of expectation since [Guaidó’s] promised immediate result failed to materialize.

Another is that the artificial fabrication in the mass media and in the world of diplomacy never reached beyond the historical social base of the right wing [which is set apart from the popular masses] by class difference, by geography and by material living conditions, idiosyncrasies and fantasies. The current opposition looks too much like the opposition always did.

The most favorable scenario for disruption was through the attempt to provoke the popular masses and drive them into the streets against the government by [electrical] power cuts and the consequent lack of water.

But on this third point, the result [for Guaidó] was also not the one expected [by the U.S.]: The overwhelming image [from Venezuela] was that of a vast number of people seeking to solve problems, individually and collectively, together with the government.

The protests, driven almost entirely by the reactionary opposition, were small and without the capacity to spread.

New results are produced from these developments. The crisis of expectations is due, for example, to the fact that the FANB has remained intact, that Guaidó speaks of an immediate result that never happens, with the conclusion that when none of the three results occur, the only thing left [for the reactionary opposition] is to call for international intervention led by the United States.

In turn, that interventionist narrative alienates those who might otherwise see in Guaidó’s proposal an alternative to the current political and economic situation. Summoning a majority to support an international intervention encounters obvious obstacles.

The overthrow of Maduro seems impossible in regard to the balance of forces inside Venezuela. It has been demonstrated that a military assault will not be short-lived and that Chavismo, which is more than merely a government, is in a position to resist.

If [the situation] were merely a national affair, Guaidó would continue losing strength until he joined the list of opposition leaders branded by the weight of defeat.

The problem is that this new attempted coup d’état was armed to a point of no return — a facade of a parallel government made in the U.S, later recognized by the European Union, Britain, Israel, Canada and right-wing governments of Latin America.

What is to be done with Guaidó if the plan does not yield results because of the initial miscalculation?

The question is, in fact, about the U.S., its current administration of the Donald Trump-neoconservative combination and what is called the “deep state,” i.e., the invisible power structure that constitutes and guarantees U.S. strategic development in [global] geopolitical struggle [by the  imperialist state and its repressive apparatus.]

A defeat in Venezuela would be blamed on this administration, which is in a pre-election period, and would be twofold: Maduro [would] stay in office, [showing the U.S.] inability to bring a key element in Latin America into alignment with the U.S. [goals], and, second, all the implications [of this on] the international arena.

The [significance of] the latter has gained particular strength in recent days, expressed in the voices and tweets of different U.S. spokespersons, such as U.S. Special Envoy for Venezuela Elliot Abrams, Secretary of State Mike Pompeo, National Security Adviser John Bolton and Craig Faller, head of the U.S. Army’s Southern Command. Their various statements have shaped a narrative that places Venezuela as the base of operations for Russia, Iran, Cuba and China. They [narrate] Maduro’s government as subordinate to each of those states and their respective intelligence services, particularly the first three.

The U.S. has announced the next steps in the construction of that scenario. Pompeo will go to Chile, Paraguay, Peru and Colombia, and Abrams to Spain and Portugal. [The U.S.] has convened a third meeting of the United Nations Security Council to address the issue of Venezuela.

The objectives for each of the visits have not been announced, although it is possible to foresee that there will be a private and a public dimension to the agreements.

The second step could be to move forward on what appears to be a U.S. objective: to declare the Venezuelan government a transnational criminal organization and to label the “collectives” — a Chavista form of people’s organization — as terrorist groups. Bolton said they “undermine the Constitution and the territorial integrity of Venezuela.” Each of these elements gives rise to possible new actions.

That [U.S.] increase in pressure, blockades and isolation does not yet raise the possibility of military intervention beyond the rhetoric of “all options are on the table.” Abrams himself once again put that idea aside on April 4.

How then does [the U.S.] plan an escalation to achieve the desired outcome with the sum of these actions?

The U.S. has to define pathways, operational capabilities in the territory and internal and diplomatic agreements. With regard to the latter, the European Union’s position on the matter, in the voice of Federica Mogherini, maintains that “the ground must be prepared for free and transparent presidential elections to be held as soon as possible.” [Mogherini is High Representative of the European Union for Foreign Affairs and Security Policy.]

Would the U.S. be willing to pursue a negotiated outcome possibly leaving Maduro in office?

At the moment the U.S. doesn’t appear to be interested, nor will they admit defeat in Venezuela, which would be geopolitical … The U.N. Security Council meeting [convened by the U.S.] to address Venezuela will be held April 11.

The right wing, for its part, has called for protests. The picture is still in motion.