An arsonist set a fire on the night of March 29 that destroyed the main office building and decades of irreplaceable activist archives at the Highlander Research and Education Center in New Market, Tenn.

The Highlander has been a historic school for justice and liberation movements. Since the early 1930s, it has supported and trained leaders for every crucial progressive struggle in the U.S. South. 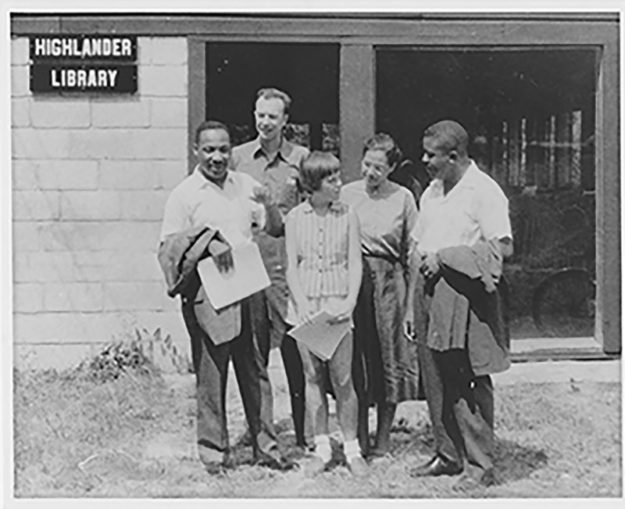 The Highlander’s role in sparking motion against bigotry and repression — in the South and elsewhere in the U.S. — cannot be overstated.

The arson was undoubtedly an attack by white supremacists. A racist symbol connected to the “white power” movement was spray-painted next to the main building. This symbol, associated with European fascism, was drawn on one of the guns used to massacre 50 Muslims in New Zealand mosques last month. lt was also painted, along with swastikas, on the University of Tennessee-Knoxville campus in November.

Originally named the Highlander Folk School, this activist resource was founded in 1932 by Myles Horton and others near Chattanooga in one of the poorest counties in the U.S. At first it focused on organizing workers during the Depression. By the late 1930s, Highlander, in conjunction with the then left- and communist-led CIO, was training union organizers in 11 Southern states. The school saw fighting racism, including in the labor movement, as essential to building worker unity in the South.

As labor-related advances attempted by Highlander organizers were consistently blocked by the white-segregationist powers-that-be, the school concentrated on building a broad social movement by supporting the Black Freedom Movement. In the 1950s and 1960s, workshops and training sessions at Highlander were part of building key Civil Rights initiatives, including the Montgomery Bus Boycott, the Citizenship Schools and the founding of the Student Nonviolent Coordinating Committee (SNCC).

After years of red-baiting, Ku Klux Klan threats and government investigations, the state of Tennessee in 1961 revoked the school’s charter and seized its land and buildings. The next day it reopened as Highlander Research and Education Center, at first based in Knoxville and then in its current location.

From the 1960s through the 1990s, Highlander focused on Appalachian people’s struggles, including worker health and safety linked to anti-strip-mining, anti-pollution initiatives. It connected these to emerging anti-globalization movements and economic human rights.

With the turn of the century, Highlander continued to grow, with specific support for multiracial, multinational, intergenerational movements for social and economic justice in the South.

The arson attack points to the center’s role in fighting white supremacy. The center’s April 2 statement on the fire analyzes the 21st century rise in global “white-power” organizing, emboldened by “the politics of the [U.S.] government’s executive branch.” It notes the recent targeting in the U.S. of Muslims, Jews, immigrants, women and Black people — the majority of whom live in the South.

The statement ends: “Even in the face of these realities, the Southern freedom movement is alive and well. Highlander is a sacred place built by communities of the most affected people, and it has become a home to those who believe in freedom and collective liberation here in the South, across the U.S and around the world.”

A member of the Highlander Board of Directors, Loan T., emphasized in a communication to Workers World: “An attack on the Highlander Center is not an attack on Highlander alone. It is an attack on the decades, if not centuries, of Southern organizing that has exposed the repressive ruling forces that pit white workers and oppressed peoples of many nationalities against each other. We know that the only way to beat back these attacks is to remain steadfast in our solidarity; to defend the tradition of creating terrain where Southerners, where Black workers and white workers, where all working-class people can unite and build power against their real enemies.”

Loan T. concluded: “To this tradition and this struggle Highlander has been faithful and essential in the South. No matter what, we will continue to organize to resist white supremacy, patriarchy and capitalism.”

An outpouring of solidarity for the center has underlined its importance to Southern and U.S. organizing. Updates can be found at facebook.com/highlander.center/.