Frustrations with frequent school closings along “borders” of different school districts were also raised. One East End mother Norma Mottu said, “Air has no border.”  Concern was expressed for undocumented folks affected who are too afraid to get help.

The meeting centered on the physical effects of the massive, dark, chemical cloud that lingered over the city for three days. Residents described irritated eyes and throats. One noted loss of appetite and vomiting, as well as long wait times at doctors who were checking vital signs without taking blood or urine samples. 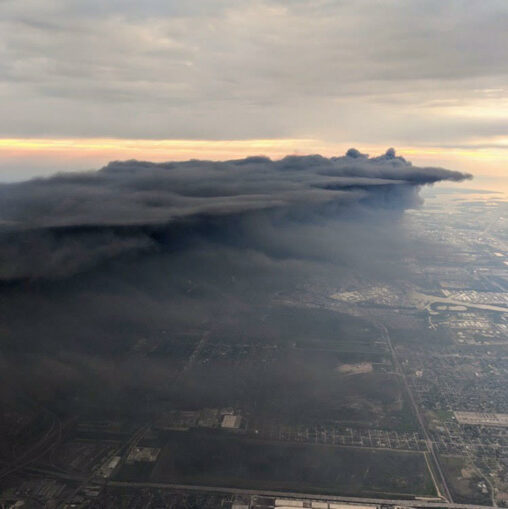 Internal medicine practitioner Dr. Rupa Nalam, referencing the Centers for Disease Control and Prevention (CDC), confirmed what many of the residents already knew to be true about the effects of cancer-causing benzene released by the fire. Dr. Nalam said the immediate effects of exposure include drowsiness, dizziness, headaches, irritation of eyes and throat, rapid or irregular heartbeat and vomiting. Longer-term effects of high exposure include bone marrow damage and leukemia.

Houston-based lawyer Benny Agosto Jr. advised residents to get documentation for their symptoms. He informed people that if they do file a claim directly with ITC, they would be signing away their right to seek compensation in the future.

Houston Fire Chief Samuel Peña explained that Deer Park was outside of Houston’s jurisdiction, but that he was providing resources and aid to the first responders despite massive budget and personnel cuts that the Fire Department is facing. Arbitrary borders and power distributions between governing bodies have already proven inadequate in preventing these man-made disasters from happening, though those on the panel seemed for the most part to be working hard on present responses.

However, when pressed with concerns about water contamination, longterm legislative moves and legal recourse for undocumented people, responses were unsatisfying. One young woman named Kelly questioned Fire Chief Peña about whether the foam used to put out the fire had contaminated the water. She also challenged the Houston Independent School District Board member on the panel, noting, “I do want to remind everybody that (HISD Trustee) Sergio Lira voted twice to privatize four HISD schools. So take whatever he has to say about caring about children with a grain of salt.”

Kelly also voiced concern about the longterm effect of pollutants, given that the Texas Commission on Environmental Quality has fined less than 10 percent of violations in the city of Houston, home to 4,200 chemical tanks. She also noted that refineries built over 30 years ago were not designed to withstand natural disasters like Hurricane Harvey, which was fueled by climate change.

After the town hall, folks were urged to fill out anonymous health questionnaires to be compiled and presented to the County Commissioners meeting on March 26. Community-based Bayou Action Street Health offered services, including distribution of shelter-in-place kits and accompanying and advocating for undocumented folks with health-related appointments. The owners and operators of two food trucks fed firefighters before the flames were put out. The gaps left by governing bodies were filled in by community members ready to see ITC held accountable.

The capitalist system of profits over people was the cause of the fire by ITC, a company that has continuously violated laws and the environment. It is up to grassroots people to organize and demand that not only are laws followed, but those corporations which violate the law, violate our health and violate the environment are penalized or shut down. Mothers shouldn’t live in fear that their children’s health is in constant jeopardy. Kids shouldn’t have to be separated from parents and sent to live with relatives in other cities to avoid pollutants. No one without insurance should have to pay thousands of dollars for health care due to ITC’s negligence.

We need reparations. Everyone in the Houston metro area should be given free doctors’ appointments so they can find out what this disaster has done to their health and then be compensated for all health issues by ITC. If we lived in a just society, that would be a given.