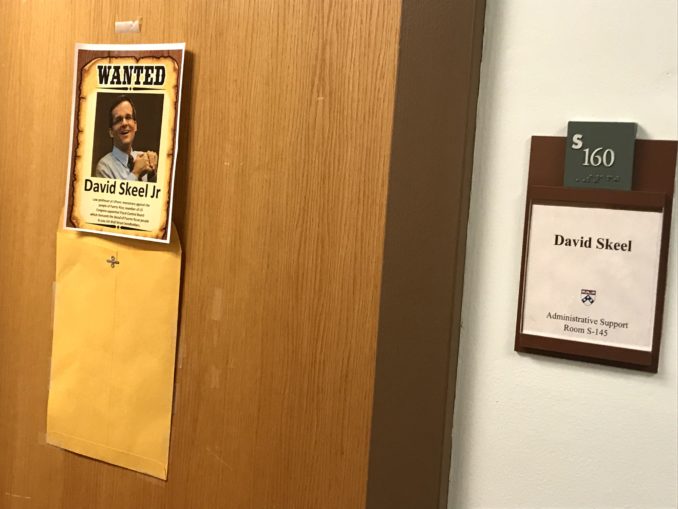 Over 60 students and alumni of Penn Law School have released a collective statement condemning Professor David Skeel Jr. as the recipient of the 2019 Beacon Award. Skeel is cited for his service on Puerto Rico’s Financial Oversight and Management Board, also known as the Fiscal Control Board. The annual award recognizes “exemplary commitment” to pro bono work by a Penn Law faculty member.

The March 27 statement makes clear that the FCB, known by the people of Puerto Rico as “la junta,” is an anti-democratic regime defending the interests of the profit-making financial sector at the expense of the life and health of the Puerto Rican people.

The statement opposing Skeel states: “Because of the Board, Puerto Rican workers have lost benefits, including sick leave and vacation pay, and hundreds of their public schools have been shuttered to pay debts to Wall Street banks.  San Juan Mayor Carmen Yulin Cruz has called the Board ‘an exercise of raw colonialism.’ Gov. Ricardo Rosselló accused the FCB of trying to ‘impose measures that negatively affect the quality of life of our people.’”

The students and alumni emphasize: “The Board serves the banks, not the people. We strongly urge the Toll Public Interest Center Advisory Board to reconsider their choice.”

This is not the first time that David Skeel Jr., who teaches bankruptcy law in Philadelphia, has been targeted for participation in la junta. Over the summer and fall of 2018 “wanted posters” appeared around the Penn campus bearing Skeel’s photograph. These labeled him a “mercenary who demands the blood of Puerto Rican people to pay rich Wall Street bondholders.”

Demonstrations were held at the Penn campus to focus on the role of Skeel and Philadelphia native Julia Keleher in the theft of Puerto Rican resources. Keleher was paid $250,000 by the FCB to serve as Puerto Rico’s “Education Secretary” despite her lack of education experience.

In an Wall Street Journal op-ed on Sept. 13, 2018, Skeel objected to the posters, pointing out that PROMESA — the Puerto Rico Oversight, Management and Economic Stability Act signed into law by President Obama in 2016 — instructed the oversight board to “achieve fiscal responsibility and access to the capital markets.”

Skeel’s work for Wall Street started long before that act was signed. In a 2014 WSJ article, he argued for management of the debt crisis in Puerto Rico as a test case for attacking workers’ rights. He cited parallels to U.S. states facing similar hardships, such as Illinois, New Jersey, Pennsylvania and cities like Philadelphia.

In the article Skeel pointed out that, unlike local officials reluctant to make drastic cuts because they are subject to reelections, a board appointed by congressional mandate could get away with attacking public employee unions and cutting programs, jobs and benefits.

In his words as an advocate for “capital markets”: “There may be a silver lining in these financial clouds.”

Who got to line their pockets with silver obtained through the “restructuring” of Puerto Rico’s debt? Members of the FCB, appointed by the U.S. president and chosen by leaders of the House and Senate, were given broad powers to serve the interest of the bondholders, with no accountability to the people of Puerto Rico.

The FCB’s powers included instituting automatic hiring freezes and reducing the minimum hourly wage of workers under 25 years old from $7.25 to $4.25.

The resulting layoffs, cuts in basic services and increases in the cost of living exacerbate hunger and poverty on the island, which continue to worsen nearly two years after Hurricane Maria. Foreclosures of mortgages on homes and repossessions of automobiles have became widespread.

Under the pretext of “stimulating the economy,” the Law of Transformation and Labor Flexibilization of 2017 stripped workers of hard-won gains, including the 8-hour day. This law cut wages, vacation and sick days, reduced bonuses and extended workers’ probation periods.

The 2017 Single Employer Law impacted public sector workers by defining the government as a single employer that could move workers from one agency to another at will, even to the private sector. Workers who are moved face the loss of protections won under collective bargaining agreements,  including seniority.

In addition to draconian attacks on workers’ rights, the FCB also imposed taxes and increases in fines and tolls across the board, while cutting municipal subsidies and allocations for art, culture and sports programs and programs protecting women. Other FCB cuts included $1 billion from health care, a 10 percent reduction in pensions, and more than $600 million from  the budget of the University of Puerto Rico.

There is clearly nothing “exemplary” or “pro bono” — “for the good” — about the mercenary job Skeel is doing on Puerto Rico.