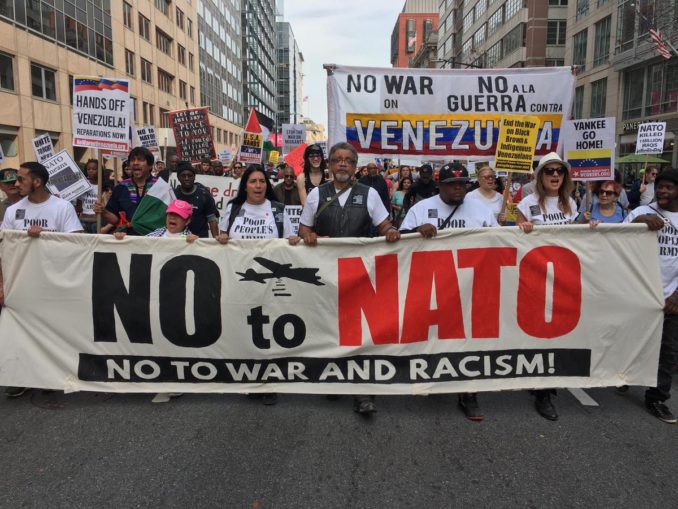 Several hundred activists and organizers took to the streets of the U.S. capital on Saturday, March 30, traveling from all over to world to oppose NATO and all imperialist war as military leaders assembled there to mark the 70th anniversary of NATO’s formation.

Joining the demonstrators were anti-NATO activists from Greece, Ukraine, Mexico, Argentina, Belgium and Wales. A large contingent of union bus drivers from Boston, equipped with signs and a banner, came for the march, and were represented at the rally by the president of United Steelworkers Local 8751, the Haitian-born Andre François.

William Camacaro, a Venezuelan activist with the Alberto Lovero Bolivarian Circle, recently returned from a visit to his home country. “Any confrontation against Venezuela would be a disaster not only for Venezuelans but also for the entire region: for Colombia, for Brazil, for the Caribbean islands. And that really will create a humanitarian crisis.

“[NATO] has been creating a humanitarian crisis with all these sanctions,” said Camacaro. “But we know that the United States, especially this pathological president, probably wants to have a confrontation.”

Loan T., co-chair of the No2NATO rally representing the International Action Center, told the activists, “The war has already begun on Venezuela, with economic sanctions and outright media lies attempting to turn the rest of the world against the Bolivarian Revolution. The cycle of war and domination is a twisted game that imperialists play for their endless drive for profit.

“Instead of war, how about reparations for Venezuela? Reparations for Cuba, Puerto Rico, for the Honduran migrants at the border! Reparations for Flint, Michigan! For Black, Brown and Indigenous people facing police brutality and incarceration in this country! Reparations for people around the world resisting the gun of U.S. empire and of the NATO war machine!”

The march worked its way through the streets of the capital, across the new spring grass growing on the National Mall, and through the walkways of cherry blossoms in Lafayette Park across from the White House. It demanded the attention of thousands of tourists and was supported by many workers passing by on their way to jobs.

A few fascist-tourists wearing “Make America Great Again” hats sullenly lurked around the outskirts of the rally, but the anti-NATO demonstration met with no organized resistance by the pro-coup Venezuelan opposition — potentially a sign of flagging morale. Simultaneously, in Caracas, tens of thousands came out in support of the Bolivarian Revolution, despite repeated attacks on the city’s electrical grid.

Milos Raickovich spoke movingly about the devastation visited upon Yugoslavia and Serbia by NATO in 1999. He recalled the celebrations NATO held in Washington to mark the alliance’s 50th anniversary, during the bombing of his country. “They were all celebrating, laughing, with champagne. Even [Czech anti-communist leader] Vaclav Havel. Everything is upside down today.”

Raickovich, who recently commemorated the 20th anniversary of the destruction of Yugoslavia in a ceremony in New York City, also expressed heartfelt solidarity with U.S. political prisoner Mumia Abu-Jamal, who writes extensively about the imperialist aggression in Eastern Europe in the second volume of his new book, “Murder, Inc.”

The Minister of Confrontation of the MOVE Organization, Pam Africa, electrified the crowd with her stirring address. Speaking to the need for a broader anti-war, anti-racist coalition of the kind that organized the March 30 mobilization, she said, “I’ll work with everybody who’s prepared to tear this motherfucker down! As Malcolm said, we must do this by any means necessary.

“The war being waged on Venezuela and around the world,” she continued, “is the same war that they are waging right here. In order to fight for Venezuela, we must stand up and destroy these motherfuckers here [who perpetrate] the beatings, the bombings, the jailings of our people.”

The march and rally were covered extensively by teleSUR, Russia Today and many independent journalists. Livestream coverage on the WWP Facebook page reached the feeds of more than 29,000 people. Venezuelan Minister of Foreign Affairs Jorge Arreaza posted coverage of the No2NATO mobilization on Twitter, as did President Nicolás Maduro himself, sharing videos of the demonstration and rally to his 3.9 million followers.

The No2NATO mobilization continues for the duration of the NATO summit, culminating in an event hosted by the Black Alliance for Peace on April 4. A full schedule of events can be found at No2NATO2019.org, nowaronvenezuela.org and blackallianceforpeace.com.

This demonstration of activists from all across the progressive political map shows that the anti-war movement, long dormant in this country, is now undergoing a tectonic revival that will shake the empire to its very foundations.