The following article was published on March 27 in pagina12.com.ar. Translation by Michael Otto. 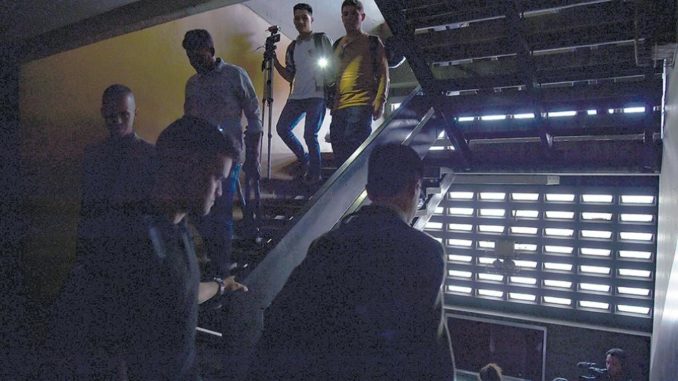 A power outage was recorded Monday afternoon, March 25, at 1:29 p.m. in sixteen states of Venezuela, including much of Caracas. The outage lasted about three hours. After electric service was restored, Communication Minister Jorge Rodriguez reported that it was a new act of sabotage as part of the destabilization plan against Venezuela.

“We have been hit by a new attack on the transmission and power center of the National Electric System that aimed to disable the engines of the Simón Bolívar Hydroelectric Plant located in Guri, in the state of Guayana,” he said. By 7 o’clock in the afternoon, the necessary generation levels had been obtained to restore the service.

When the situation appeared to have been stabilized, a new attack was registered at 9:47 p.m. on March 25 in the Guri’s transmission yard, “affecting the three autotransformers that comprise it and the essential cable that transmits the power,” Rodríguez said. The capital and a large part of the country were once again in darkness.

About 10:45 a.m. on Tuesday, the first lights were back on in Caracas. By early morning the Minister of Communication had already informed the country that there would be a 24-hour suspension of school and work activities in the country and that several transport contingency plans had been activated, particularly in Caracas, which had been disrupted by a breakdown in subway service.

The stoppage took place 18 days after the previous one, which lasted for several days. On that occasion, President Nicolás Maduro reported that there had been sabotage involving four kinds of attack: cyberassault, electromagnetic, fire, and an inside job, affecting both generation and transmission centers. The Russian government supported his explanation when its Ministry of Foreign Affairs affirmed that some of these attacks originated abroad.

According to the government, this was the second major blackout caused by sabotage, which constitutes what Rodriguez has called “the Electric War.” In his Twitter account he showed images of the fire, the work to extinguish it and the exact place where it happened.

This new episode comes after the denunciation made by Rodriguez, who announced last Saturday that part of the terrorist organization had been arrested and dismantled. He explained that leaders of the Popular Will party were in charge, with the participation of Juan Guaidó himself, along with foreign agents who raise money and support groups including mercenaries and paramilitary agents from Colombia, El Salvador, Guatemala and Honduras. Part of their plan was to carry out actions such as attacks on the subway and sabotage.

The power outages are part of the overall conspiracy that began in January with Guaidó’s naming himself interim president and those particularly after Feb. 23. At that time, the plans of rightwing and North American spokespeople who claimed they would get humanitarian aid into the country were frustrated. From then on, the difficulty they had maintaining expectations regarding Guaidó among his social base became visible. So too did their problem of advancing in a straight line toward foreign military intervention in Venezuela, as rightwing spokespeople had been predicting earlier.

It was at that moment that the national power outages began, exposed as attacks under the umbrella of Washington’s openly and publicly sponsored agenda. The outages are seen as a means of exerting pressure in a scenario of chaos, exhaustion and economic distress, on the heels of the financial attacks that have intensified in recent days, particularly on various banks. According to Guaidó, this outage, like the previous one, was caused by lack of maintenance of the electrical infrastructure.

The situation returned to normal in Caracas on Tuesday afternoon, March 26. The government has announced joint efforts by several institutions to stabilize the system throughout the country in the shortest time possible in order to avoid a chain of problems arising from the outage, such as a water shortage. During the previous power shutdown, the attacks followed one after the other and generated a vicious off-on-off cycle in numerous instances.

This time, as before, the quiet response of the population focused on solving the problems caused by the lack of electricity.