March 25 — With a tweet and an executive order, the Trump administration has further isolated itself globally by reversing decades of U.S. policy in calling for “the United States to fully recognize Israel’s sovereignty over the Golan Heights.” The area, which is correctly known as Syrian Golan, is located in southwestern Syria. It was seized by Israel during the June 1967 Arab-Israeli War and has been occupied ever since. 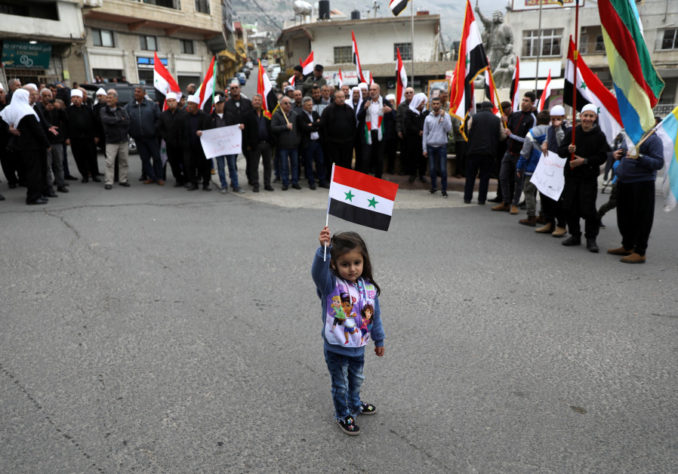 A child holds a Syrian flag at a rally in the village of Madjal Shams, in Israeli-occupied Syrian Golan, March 23

Like Palestine, the occupation of Syrian Golan has been brutal. The city of Quneitra and 344 villages and farms were destroyed. Lands were expropriated for military bases and Zionist settlements. A rich and thriving Syrian agricultural community was no more. Over 130,000 Syrians were forced from their homes, resulting in a refugee diaspora today — over 50 years later — of around 500,000 Syrians who are denied their right of return.

Today approximately 25,000 Syrians, mostly followers of the Druze religion, live among four villages, the largest being Madjal Shams, in Syrian Golan.  They are the definition of steadfastness and resistance and are exemplified by Zionist prisoner Sidika al-Maqt, who is from Madjal Shams. After serving 27 consecutive years of imprisonment, he was released in 2012. He was re-arrested in 2015 and sentenced to another 14 years!

On Dec. 14, 1981, Israel declared that it had annexed Syrian Golan. Three days later the United Nations Security Council unanimously (including the U.S.) adopted Resolution 497 which declared the annexation “null and void and without international legal effect.” For this reason alone (and there are others), the Trump administration’s moves are in complete violation of international law.

According to Al-Marsad (golan-marsad.org), a human rights organization based in Syrian Golan, “Today there are approximately 23,000 settlers, living in over 34 illegal settlements, profiting from the Occupied Syrian Golan’s abundant natural resources.  The Occupied Syrian Golan is a rich volcanic plateau with extremely fertile soil. The region is home to a huge variety of valuable natural resources, making it an ideal location for settlements and settlement industries. Since the occupation began, the Israeli authorities have aimed to implement policies which control the valuable resources in the region, in particular the land and the water.”

The day after Trump’s tweet, Syrian residents in the Occupied Syrian Golan held a protest extensively covered in the Israeli press, possibly as a reality check to settlers throughout all Zionist-occupied lands. Amal Safadi, a 54-year-old librarian, eloquently summed thing up: “Our blood is Syrian. If you take a blood test for a child, it will read Syrian.” (ynetnews.com)

The writer is a member of Veterans For Peace. He served in the Israel Defense Forces from 1972-75 and took part in the illegal occupation of Syrian Golan.