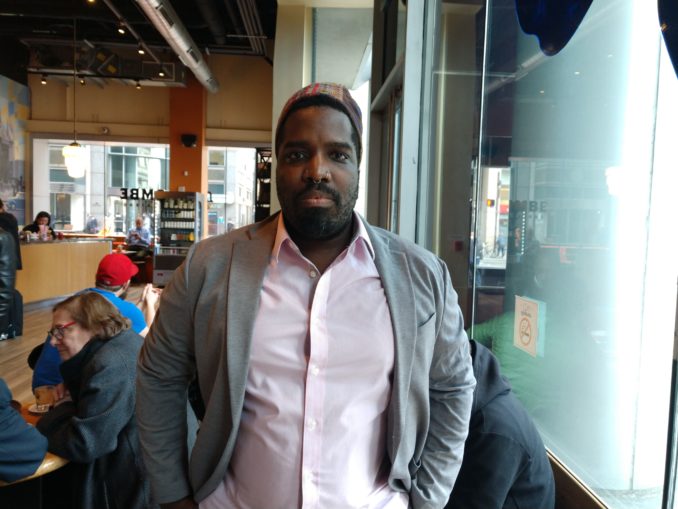 At 2 a.m. on the night of Feb. 23, over 50 people were gathered outside Philadelphia’s Ninth Police Precinct building at 21st and Hamilton. Despite frigid temperatures, the dozens of primarily Black activists rallied, chanted and shut down traffic demanding the release of Abdul-Aliy Muhammad, arrested earlier that evening at City Hall.

Muhammad is one of the founders of the Black and Brown Workers Cooperative, dedicated to the liberation of the most oppressed sectors of the working class. BBWC has launched several campaigns to combat gentrification in Philadelphia, as well as confronting white supremacy in the city’s LGBTQ institutions.

In 2017, they mobilized to confront a culture of racism and sexual violence permitted by the administration of the Mazzoni Center, one of the largest LGBTQ health care providers in the U.S. Over 70 workers walked out, calling for the resignation of Mazzoni CEO Nurit Shein, among other demands.

Muhammad, who is HIV positive, put their body on the front lines of the struggle by engaging in a “med strike” — forgoing the medications that keep the virus at bay. Shein and another executive resigned within three days. BBWC is working with the Mazzoni Center to assure that structural changes are made to address workers’ demands.

Activist victory over cops and cronies

Now the cooperative has turned its energies toward revealing and reversing the displacement of Black and Brown communities. At a Feb. 21 re-election campaign launch event for City Councilmember Jannie Blackwell, BBWC protested the 30-year incumbent for collusion with real estate developers to sell off public properties to her friends and cronies.

At the protest, Blackwell’s campaign staff violently assaulted demonstrators and called the notoriously racist Philadelphia Police Department on them. Blackwell associate Michael Youngblood assailed BBWC members with threats of rape and further violence. Youngblood, who works as a private contractor for Blackwell’s family, was convicted of bank fraud and extortion for shaking down a homeless shelter in the Third District.

Two days later, organizers staged another protest to disrupt a Council meeting at City Hall. Again, Blackwell and her allies on the City Council called police on the protesters, and Muhammad was arrested in full view of the press and the public.

Police outrageously claimed that this revolutionary activist was armed and attacked the officers, charging Muhammad with possession of an instrument of crime, resisting arrest, reckless endangerment and aggravated assault, among other serious and bogus charges.

After the Feb. 23 arrest, Muhammad was transported to Hahnemann Hospital to be treated for injuries inflicted by the police. The hospital refused to allow Muhammad to be treated without police in the room, so Muhammad declined treatment. They were then taken to the Ninth Precinct building where officers refused to serve halal food to Muhammad who is Muslim.

That’s when the network of workers and oppressed people snapped into action to demand the immediate release of Abdul-Aliy Muhammad.

Finally, on March 21, as the result of organized effort by the community, all charges against Muhammad were dropped, with the exception of a disorderly conduct charge. Abdul-Aliy pleaded guilty and was fined $100.

Abdul-Aliy Muhammad was born to Melody Ellen Beverly, who became the first Black woman to operate a trolley in Philadelphia. When Beverly was a child, her family was one of the first to move into the 46th Street projects. Beverly converted to Islam and her family joined a Muslim community on the 52nd Street corridor. Muhammad grew up with Arabic as their first language.

Inheriting a deep spirituality from their mother, Muhammad said, in comments to WW, that it can be very difficult to be both Muslim and queer. “These rigid boxes are violent,” they said when describing the conflict imposed on these identities. This has certainly informed Muhammad’s activism, particularly in BBWC’s mobilization against racism and segregation at gay clubs in Philadelphia.

A poet, Muhammed says, “Writing was crucial to my survival. If I didn’t write, I would be dead.” When medical professionals sometimes insinuate that HIV positive folks should abstain from sex and intimacy, Muhammad refuses to have their bodily autonomy revoked. The victim blaming and stigma are not unlike what they saw their mother face after she was diagnosed with lung cancer.

“It wasn’t until the 2000s that you started to see white folks not just shopping and passing through West Philly communities, but settling there,” Muhammad told WW. Luxury apartments began springing up overlooking Malcolm X Park. Student apartments replaced family homes. Muhammad was forced out of their own community due to skyrocketing rent and lived in South Philly for some time before they were able to return to their home in Philadelphia’s Third District.

Council member Blackwell is known to exercise a prerogative that Muhammad described as “an unspoken deference City Council members receive in deciding on land deals that happen within their district’s borders.”

Blackwell wants to see a vacant city-owned property at 4601 Market Street sold for $10 million to a private developer. Michael Karp has been awarded numerous contracts to gentrify West Philly with luxury student housing around the University of Pennsylvania and Drexel University. This is part of a decades-long project to “settle” that historically Black neighborhood, turning communities like Mantua, Powelton Village and Black Bottom over to landlords who rent to white students in “University City.” Karp, also an “advocate” for charter schools, is a founder of the for-profit Belmont School.

Karp is not unique in Philadelphia. In a recent op-ed written for the Philadelphia Inquirer, Abdul-Aliy also pointed to the examples of developers Shawn Bullard and Felton Hayman, who both made a fortune after other members of City Council were able to use their “prerogative” to award contracts.

Muhammad wrote: “To raise awareness of these issues, the Black and Brown Workers Co-op, an organization I helped to co-found with Shani Akilah and Dominique London, launched an anti-displacement platform last summer called ‘disappearing Blackness is displacement politics,’ which tackles the gentrification of West and Southwest Philadelphia. Dominique knows this issue firsthand: She was displaced from her own apartment in Wynnefield. As a whole, our collective focuses on the communities that we have seen be hit hardest by displacement and homelessness: Black and Brown people, LGBTQIA people, and people living with disabilities, including chronic illness.

“We urge city leaders to consider those populations and develop a means by which 40 percent of city-owned land in each district would be reserved for residents and community members — not just officials — to decide its use. After all, when [real estate developer Shawn Bullard] said he wanted his property to cater to college students and ‘millennials that work downtown,’ that doesn’t sound like it describes most Philadelphians.”

Philadelphia is a working-class city. And it is, more importantly, a Black and Brown city. “It shouldn’t be any one person’s prerogative,” Muhammad wrote in conclusion. “It has to be all of ours.”