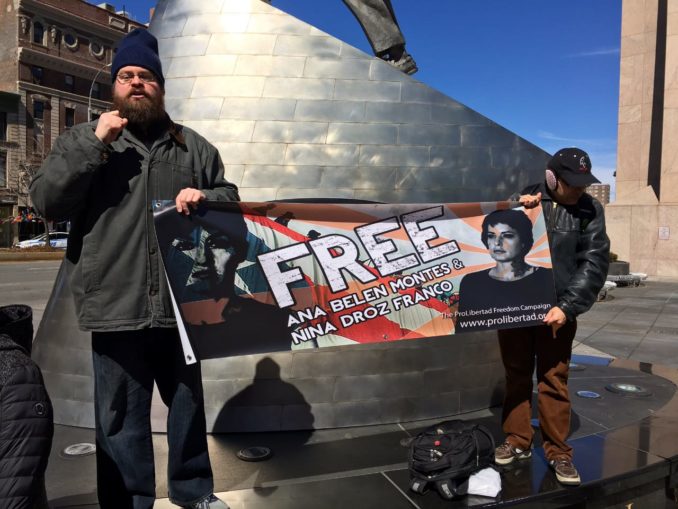 On March 23 the ProLibertad Freedom Campaign held a Freedom March in Harlem as part of their Women’s History Month activities and dedicated it to these heroes. ProLibertad organizes support for Puerto Rican political prisoners and demands independence for Puerto Rico.

Ana Belén Montes was a Pentagon analyst hired by the Defense Intelligence Agency. One of her first assignments was to go to Cuba to study their military, according to ProLibertad.

Her work meant that she was granted access to almost everything intelligence forces had related to Cuba, including from the CIA and the State Department.

“Allegedly for 16 years, she shared the information … with Cuba,” states ProLibertad. (tinyurl.com/y6kfpusl)

In 2001, Ana Belén Montes was arrested by the FBI and accused of “conspiracy to commit espionage” in favor of Cuba. She pleaded guilty.

She was sentenced to 25 years in prison without parole and sent to a Navy Base prison in Texas. Her release date is scheduled for July 1, 2023. At her trial, Ana Belén Montes testified: “I engaged in the activity … because I obeyed my conscience rather than the law. I believe our government’s policy toward Cuba is cruel and unfair … and I felt … obligated to help the island defend itself from our efforts to impose our values and our political system.”

Nina Alejandra Droz Franco was arrested in San Juan, Puerto Rico, after she blocked a line of riot police at a major demonstration and rebellion on May Day 2017. She was accused of trying to set fire to the Banco Popular building, a target of the protest.

The anger of the Puerto Rican people toward banks is righteous. The banks, in collusion with the hated Fiscal Control Board imposed in 2016, have almost brought Puerto Rico to its knees. Unemployment and poverty abound. This, coupled with devastation from Hurricane Maria in 2017, has brought miserable conditions to Puerto Rico.

The U.S. District Attorney for Puerto Rico tried to portray Droz as a terrorist, but she is a freedom fighter.

Nina was sentenced to 37 months in jail and three years of probation. During the hearings, she was denied medication for chronic pain and anxiety. ProLibertad fears she might be moved to a U.S. prison.

Ben Ramos, an organizer of ProLibertad, told Workers World, “These marches will continue until Nina and Ana Belén are free. Only through community education, mobilization and agitation will our sisters be freed. It is the people who free political prisoners!”

To find out how you can support, visit prolibertad.org.