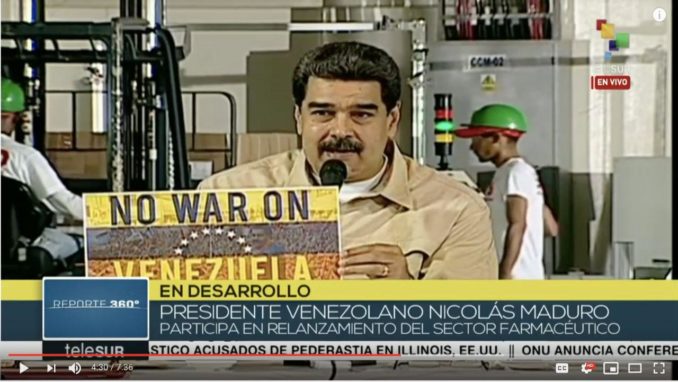 With Jair Bolsonaro standing at his side in Washington [on March 19], Donald Trump repeated the now standard line — all options are on the table — referring to Venezuela. Bolsonaro, who had said it was necessary to “liberate Venezuela,” also confirmed what was already known — his refusal to send soldiers for any military intervention.

On the same day, U.S. Special Envoy for Venezuela Elliott Abrams also asserted in Rome that all options are on the table. He then added that the U.S. has chosen the way to exert diplomatic and economic pressure on the regime for a peaceful future in Venezuela. His statements came after meeting with Russia’s Deputy Foreign Minister Sergey Riabkov, where, as expected, there was no agreement between the two sides.

Diplomatic and economic pressures arose this Monday and Tuesday [March 18 and 19]. In the first case, the illegal occupation of three Venezuelan diplomatic offices in Washington, D.C., and New York took place. At the same time, the president of Panama, Juan Carlos Varela, received Juan Guaidó’s envoy, recognized him as ambassador and received his credentials.

Regarding the economic issue, the U.S. Treasury Department yesterday [March 19] applied sanctions against the state-owned General Mining Company of Venezuela (Minerven) dealing with gold, a property that was nationalized in 2011. The sanctions prohibit any U.S. person or company from doing business with Minerven. This act followed Abrams’ March 12 threat that the U.S. was preparing “new and significant sanctions against Venezuela.”

The new attack falls within the chronology of the attacks against Venezuela, which, as researcher Pascualina Curcio points out, have generated $114.30 billion in losses. Of that total, $21.45 billion resulted from unilaterally imposed coercive measures. These included, among other things, financial blockades, trade embargoes and the theft of Citgo assets, announced by John Bolton in January. The remaining $92.85 billion corresponds to what Venezuela was unable to produce as a result of the attack on the currency and its impact on inflation and national production.

Trump declared, together with Bolsonaro, that there will be “tougher sanctions,” and repeated his call “to the Venezuelan armed forces to end their support for Maduro, who in reality is nothing more than a Cuban puppet.”

The “all options” campaign has so far resulted in a deepening attack on the economy, the creation of a parallel government built by Washington, media demonization coordinated by the corporate media, the Feb. 23 attempt to force entry into Venezuelan territory, paramilitary attacks on barracks of the Bolivarian National Armed Force (FANB) and electrical sabotage that led to a power outage lasting more than 72 hours in some parts of the country. And what other options are available? That’s the question that the gang of coup planners appointed by Donald Trump are seeking to answer.

So far three things failed to occur that, if they had occurred, could have changed the course of events in favor of this gang’s goal: a breakdown of the FANB, a popular uprising induced by economic difficulties and such acts as sabotage, and massive, multiclass support for Guaidó. Without having these variables in hand, the “cessation of usurpation” [overthrowing Nicolás Maduro] seems impossible.

This means that in order to advance toward their goal the Trump gang needs to implement other types of actions and options, besides those that are already in progress and that will continue, in particular the economic initiative and the attempt to crack the FANB. The possibility of an open war enters at that point.

Such a military contingency could assume various forms.

One can imagine an assortment of armed groups carrying out sabotage actions against the oil industry in order to undermine production and attempt to destabilize a particular territory — such as the state of Táchira or of Zulia. There are many possibilities with many actors: paramilitary criminal gangs, paramilitary structures imported from Colombia, and private mercenary forces with Middle East war experience.

These options would be “inorganic,” that is, actions directed from the U.S. without being acknowledged as such. The option of open U.S. military intervention is less likely for the time being, both for lack of consensus within the U.S. as well as in the region. Neither is the formation of a continental coalition likely, a burden that would fall mainly on Colombia, and taking into account Bolsonaro’s statements, which expressly reject the use of the Brazilian Armed Forces, a position that had already come to light.

One theory is that by the end of the month Guaidó, who promised to travel the country and return to Caracas with a national mobilization, will have exhausted his options. If he gets no greater support, nor manages to provoke internal unrest, then the phase we have analyzed above could begin. All depends on whether the North American coup plotters maintain their decision to accelerate their offensive to seek [Maduro’s] fall or the entrapment of Maduro.

The other option, which those in the Democratic Party seem to favor, is to not go beyond economic attacks and diplomatic/mass media isolation of the Bolivarian government. In that case the situation would be prolonged by these existing variables.