Do you know what it feels like to be hungry? Not just missing a meal, or being too busy to take a break. Hungry. All the time. Feeling weak and fatigued from hunger. Needing to put some food in your belly — but not having the money to do it. 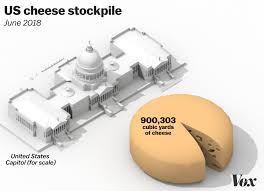 According to Move for Hunger, 41 million people in the U.S. go hungry every day.

How can this possibly be? The agriculture industry in this country produces so much food that 20 percent of it is exported each year.

But a large amount of what remains sits in warehouses. Here’s a recent description of the crisis developing in the dairy industry: “America is sitting on a massive surplus of cheese with a record 1.4 billion pounds of cheddar, American and Swiss in cold storage. … [T]he cheese glut is now bigger than it’s ever been in the 100 years the government has been keeping track. For perspective, 1.4 billion pounds of cheese translates to 700,000 tons.”  (Patch, Jan. 16)

The Des Moines Register wrote about the cheese glut back on Oct. 5, 2016, when it was still “only” 1.24 billion pounds of cheese in refrigerated warehouses. It also reported on other stockpiles, including:

Trump has just announced his proposed budget for the next fiscal year. Besides setting aside some $8.6 billion for his border wall, plus another increase in military spending, his new budget will reduce spending on domestic programs. The result is certain to be more hungry people.

The creature in the White House has declared a “national emergency” over a wall on the southern border. But 41 million people going hungry while food is stockpiled? To the billionaires who run this country, that’s not an emergency. It’s business as usual.

According to the U.S. Department of Agriculture, while 20 percent of overall agricultural production is exported, the number is even higher for certain crops: 50 percent of the soybeans and 46 percent of the wheat grown in the U.S. are sold elsewhere.

But in his campaign to “Make America Great Again,” Trump put tariffs on goods from China. This has caused China to retaliate with tariffs on U.S. imports, which is hurting U.S. farmers.

And they know who is to blame.

“My family and I farm in Illinois, where farmers like us send about 30 percent of the corn and 60 percent of the soybeans we grow to other countries. Nationally, more than 20 percent of agricultural products are exported. …

“Expectations for big corn and soybean crops and surplus supplies, combined with the escalating trade conflict, are weighing down crop prices. Soybean prices approached a 10-year low this month.

“Although the influence of U.S. trade policy cannot be completely isolated from other economic factors, the timing of trade conflicts has coincided with drops in market prices for many U.S. agricultural products. …

“Right now, farmers are facing inflation-adjusted incomes at the lowest level since 2009, and the outlook for 2019 is considerably worse.” (USA Today, Sept. 24)

So MAGA has come back to bite the very people Trump pretends to represent.

Tariffs rev up crisis of overproduction

What is never mentioned in the big business media when reporting on these surpluses is the phenomenon of capitalist overproduction. It is affecting all areas of the economy, and has led to across-the-board price declines in everything from petroleum to wheat.

Midwest farmers like Swanson are highly susceptible to the swings of the world market. They are not the small farmers of years gone by. When the economy is good, they are worth a lot of money, because modern agriculture requires expensive modern equipment. But when the economy goes sour, they can lose everything.

If even these large farmers are hurting now, you can be sure that overproduction is driving a lot of small farmers out of business and off the land. And, in fact, this has already happened. The rate of hunger is even higher among rural children than those living in cities. Some 86 percent of the counties with the highest rates of what is called “child food insecurity” are rural.

Overproduction is a uniquely capitalist problem. It is what leads to capitalist crises and a crash of the system. What is happening in agriculture may be exacerbated by Trump’s tariffs, but the underlying crime of growing hunger alongside a glut of food is the profit system itself.