March 10 — Thousands of people filled the streets of Caracas, the capital of Venezuela, in celebration of the Bolivarian Day of Anti-Imperialism on March 9. This date has been observed since 2015 when U.S. President Barack Obama declared Venezuela to be an “unusual and extraordinary” threat to national security. 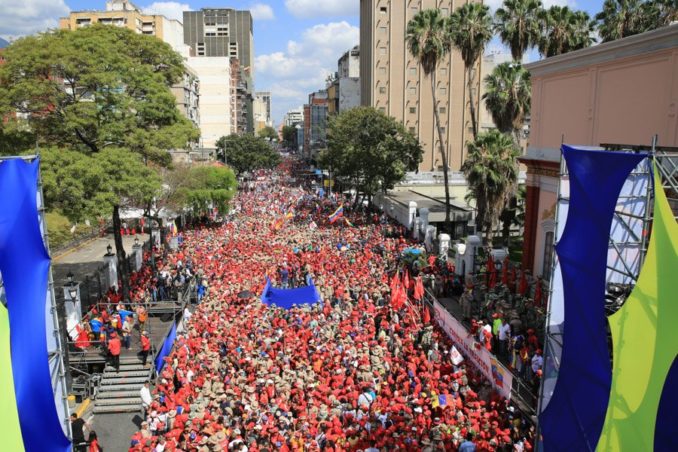 Speaking in front of the anti-imperialist march, the legitimate President Nicolás Maduro said that the opposition was responsible for the attacks against the electrical grid. The attacks came two weeks after the Venezuelan government declared that the coup attempt directed from Washington had failed.

Meanwhile, on the other side of Caracas, Juan Guaidó, the self-appointed “interim president,” indirectly threatened new, broader sabotage. Speaking from a megaphone in front of an opposition rally, he said, “We must announce with responsibility that this will become a fuel crisis.”

At the time of this writing, electricity is being gradually restored to the affected areas. According to government officials, there has been constant work to restore power and “normalize the situation” from the beginning of the attacks.

The coordinated use of international new media has been key to imperialism’s strategy in Venezuela. Until now all the major media have repeated the lies fed to them by National Security Adviser John Bolton, Sen. Marco Rubio and Special Envoy for Venezuela Elliott Abrams alleging that Maduro’s forces burned aid trucks at the border. On March 10, however, the New York Times released a report contradicting these claims and showing how the U.S. Agency for International Development truck had in fact been burned by opposition forces. (tinyurl.com/y5ykjd9e)

There can be no doubt that those U.S. operators who planned the coup will make any claim in their frenzy to conquer Venezuela. It’s not clear why the New York Times chose to break with the U.S. government at this time. This break clearly demonstrates how imperialism has lied and then used the media as a weapon in its attacks against Venezuela.

A month and a half after Juan Guaidó declared himself president, an act propelled by the United States, Nicolás Maduro remains in the presidential palace at Miraflores and the National Bolivarian Armed Forces (FANB) have remained loyal to the constitution.

On Feb. 23, the opposition attempted to bring trucks into the country from Colombia and Brazil, claiming that they contained “humanitarian aid.” Both the International Red Cross and the United Nations called the aid ploy a political move. Despite two days of violent attacks on the Colombian border, the trucks were unable to enter the country.

It was popular power mobilized to resist imperialism that defended Venezuela. On the border, the FANB was fighting alongside pro-government “colectivos,” or collectives, and civilian militias. The high levels of political consciousness and organization prevented a split inside the FANB that the U.S. and its puppet Juan Guaidó were looking for.

Feb. 23 was an important defeat for the Venezuelan opposition, even beyond their failure to get the trucks into the country, which was always a secondary objective. What the opposition truly needed was to create a pretext for invasion though violent provocations and media manipulation.

Washington hoped to gather support among the NATO countries for intervention, just as it had for the attacks on the former Yugoslavia in 1999 or in Libya in 2011. Before Feb. 23, it seemed likely that several European countries such as Britain would join this intervention. The rest of the coalition would be the Lima Group, an organization of right-wing Latin American governments, some of which were recently targeted by U.S.-backed coups — Honduras in 2009 or Brazil in 2016.

However, the heroic Bolivarian demonstration of strength and resistance caused both the European Union and the Lima Group to rule out endorsing military action. If the U.S. government wants to invade, it will have to do it without the approval of any international body.

This makes it more difficult for the Trump administration to invade openly. The question now is what the new imperialist plan against Venezuela might be. The attack against the electrical grid suggests that the plan is to destabilize and wear down the country.

The economic attacks from the U.S. will continue, and Washington has already threatened to apply sanctions to countries trading with Venezuela. The sabotage and digital attacks will continue as well, and are likely to be expanded to more critical sectors.

Another possibility is a dirty war, fought through rebel groups created and armed by the U.S. to apply enough pressure to collapse the Bolivarian social programs. The opposition already has a base of “guarimberos,” or violent street fighters, that could serve as a starting point.

In either case, the main battlefield is the economy. Imperialism’s plans to destabilize the country are based on “making the economy scream.” To defeat the new and desperate opposition attacks, it will be necessary to break the remaining power the oligarchy holds over the Venezuelan economy, while strengthening popular organization in the country.

Divisions within the U.S. ruling class

The fact that it was Obama who first classified Venezuela as a national security threat is important. This declaration was the justification for unilateral sanctions against the country. The current efforts to overthrow the Venezuelan government are a direct continuation of policies begun under Obama.

Despite their differences domestically, the leaders of both mainstream U.S. parties are firmly united when it comes to protecting imperialism. To prove it, you only have to look at how quickly Democratic leaders like Nancy Pelosi fell into line with the Rubio and Bolton narrative about Venezuela.

The unity of the two ruling-class parties serves to protect the imperialist system, ensuring the U.S. government will enforce the conditions imperialism requires. Pelosi had the opportunity to denounce the imperialist lies, and truly resist the Trump administration in the process, but Democratic Party leaders have always put imperialist interests first.

Now, as a result of the huge defeat imperialism suffered on Feb. 23, cracks are beginning to show. The New York Times’ decision to break with the government line is just the most recent sign of tension within the ruling class.

Some elected officials, such as Minnesota Rep. Ilhan Omar, have rejected the coup attempt from the very beginning. Omar’s statements and her solidarity with Palestine have drawn fierce attacks from the Democratic leadership.

Venezuela remains under serious threat by imperialism, now in the form of sabotage and economic attacks. The progressive movement in the U.S. must take advantage of these divisions in the ruling class in order to strengthen the anti-imperialist movement and demand an end to the sanctions.