March 5 — President Donald Trump added another notch on his campaign promises belt on Feb. 22. But Planned Parenthood countered that today by filing suit against his proposed changes, which aim to defund the health provider. 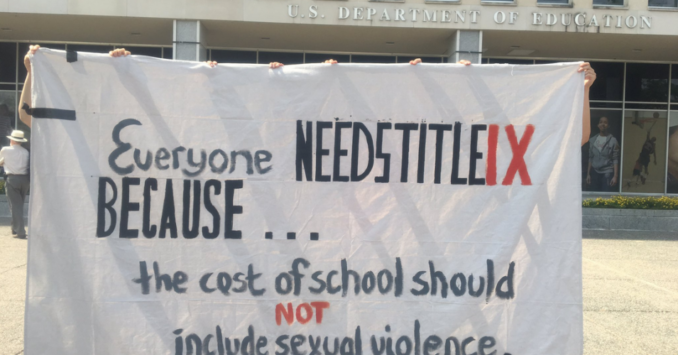 Reflecting Trump/Pence right-wing, anti-woman, anti-working class ideology, the new regulations won’t be “comprehensive and preventive.” If instituted in 2020, the revised regulations would deny pregnant people the right to learn anything about abortion — let alone where to get one — from the 4,000 reproductive health care providers enrolled in the program. That’s why pro-choice organizations have nicknamed it “the domestic gag rule,” distinguishing it from the international one Trump instituted in 2017.

The new rules mandate that all clinics providing abortions in addition to basic reproductive health care — birth control, wellness checkups, screenings for cancer and sexually transferred infections — must now set up new locations for abortions that are physically and financially separate from other services.

Although the rules don’t mention Planned Parenthood, it’s the target of the rule changes — though abortions only account for 3 percent of its health care services. But that hasn’t stopped right-wing attacks on the organization, which is the largest U.S. provider of reproductive health care for poor and working women and gender-nonconforming people — especially women of color, youth, rural residents, women with disabilities and domestic abuse survivors. Planned Parenthood annually provides 41 percent of Title X care in the country.

Though anti-choice activists contend that local health centers could serve Planned Parenthood’s current patients if the organization is forced out of the Title X program, Rewire.News reported Feb. 27 that they “would need to increase their caseloads by an average of 70 percent.”

The Guttmacher Institute reported Feb. 27: “The Title X gag rule is a blatantly coercive and unethical violation of individuals’ right to high-quality sexual and reproductive health care.” No longer would pregnant patients “receive neutral, factual and nondirective information on all their pregnancy options, including parenting, adoption and abortion,” but the rule requires all patients to be referred for prenatal care, “regardless of their wishes.”

The revised Title X rules were not official until they were posted March 4 on the Federal Register, under a deliberately obscure title, “Compliance with Statutory Program Integrity Requirements.” They are due to go into effect after 60 days, on May 3.

But the fightback began right after the changes were first announced on June 1. All the organizations that defend abortion rights and fight for reproductive justice weighed in immediately. On June 8, Rewire.News reported that mayors representing more than 32 million people in 80 cities wrote a letter to HHS denouncing the gag rule. They joined more than 200 U.S. senators and representatives, 14 governors and 274 state legislators demanding quality health care and information.

The Pro-Choice Caucus in Congress, led by Diana DeGette (D-Colo.) and Barbara Lee (D-Calif.), issued a statement Aug. 1: “[W]e will not stand for this anti-woman, anti-health agenda.” Colorlines reported Jan. 16 that the caucus will reintroduce the EACH Woman Act, which guarantees access and insurance coverage to any woman seeking an abortion. First introduced in 2015, Lee called it “the boldest pro-choice legislation in history.” If passed, the law would end the 1974 Hyde Amendment, which blocks federal Medicaid funding for abortion services.

A Hart Research Associates’ national poll shows that 73 percent of the population opposes Trump’s gag rule. As do more than 110 public health organizations.

A long list of leading U.S. medical organizations, including nurses and midwives, registered disapproval. The American Medical Association itemized its objections in a letter to HHS in August, stating the amendments would “undermine patients’ access to high-quality medical care and information, dangerously interfere with the patient-physician relationship, conflict with physicians’ ethical obligations, exclude qualified providers and jeopardize public health.”

Washington state’s attorney general was the first to file a preliminary motion to block the rule on Feb. 25, arguing that it violates the Affordable Care Act and a federal provision that requires pregnancy counseling to be nondirective. Attorneys general in Connecticut, Oregon, New York and California are soon to follow. Ten newly elected Democratic governors signed a letter condemning the “politically motivated restrictions” and vowed to find “legal options to block it being implemented.” (Rewire.News, Feb. 27)

But the real fightback will be when women, gender-nonconforming people and all their allies take to the streets, as they have for decades. The outpouring of women all over the country demanding free, legal abortion propelled the Supreme Court to legalize abortion in 1973. That’s what is needed now. As shown in every civil rights battle, whether against racism or “sodomy” laws, in every labor battle, only solidarity in struggle wins advances for working and oppressed people.

Reproductive justice must become a reality for all gender-oppressed people. Women’s liberation now!