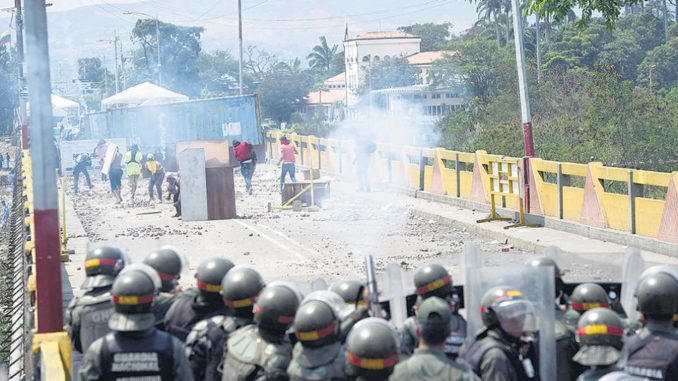 Protesters clash with agents of the Bolivarian National Guard in San Antonio, Táchira.

Something looks out of whack with the situation on the Colombian-Venezuelan border on Feb. 24. There is an off-script normality that contrasts with declarations by foreign enemies and those of the Venezuelan right. The distance is so great that a clear question arises: Either this is a huge bluff, or an invasion by foreign forces is in its early stages.

“Maduro’s days are numbered,” said U.S. Secretary of State Mike Pompeo; Marco Rubio, a senator from Florida, tweeted two images of Muammar Gaddhafi, first smiling and then lynched. And Miguel Pizarro, of Venezuela’s Justice First party, said in a press conference with other opposition forces that we are experiencing “a denouement, a final stage.”

If we believe these declarations, there will be no turning back. The doors of negotiation will stay shut. Pizzaro said, “They usurp power, there is nothing to negotiate, there is no equality of two forces that can understand each other to see how to regulate this,” and everything seems to turn to the international front.

With what objective? Juan Guaidó tweeted on Saturday night (Feb. 23-24) the line they are following: “Make a formal proposal to the international community that we must have all options open.”

The hypothesis of military intervention appears more and more open. Julio Borges, appointed to represent Guaidó in the Lima Group, tweeted: “We will demand an escalation of diplomatic pressure and the use of force against Nicolás Maduro’s dictatorship.” The Lima Group will meet Feb. 25 in the city of Bogotá, where Guaidó arrived yesterday. U.S. Vice President Mike Pence, one of the leaders, along with John Bolton and Elliot Abrams, will attend Operation Venezuela.

What will come out of that meeting? We can anticipate statements condemning Maduro, accusing him of all kinds of crimes, plus possible new diplomatic barriers, and economic blockades. Nothing we haven’t seen before. The question is what could be new, aside from the ever-present premise that one thing is what is said openly and another what is prepared under the table.

After Feb. 23 it seems that intervention is the only card they can play to carry out what they assert. It was likely not their first choice. Their first and preferred plans were for a breakdown of the Bolivarian National Armed Force (FANB), a collapse-burst effect triggered by the economic attacks and a series of actions mounted to create even greater upheavals. One of these actions failed to achieve its objective, explained Venezuelan Communication Minister Jorge Rodríguez, referring to the attempt to run over people with tanks on the morning of Feb. 23.

With respect to FANB, the right-wing campaign has tried to magnify the images of defectors. According to Pizarro, the number was over 100. According to government sources, it was 15. The impact was in the media, since there are not actors within Venezuela with the capacity to generate breakdowns that could lead to an assault on the presidential palace.

No FANB sector joined the coup

No FANB sector has appeared so far to join the coup d’état, which demonstrates the falsehood of dozens of headlines, statements, and analyses that announced imminent fractures.

At that point, after more than a month of Guaidó’s self-proclamation recognized on Twitter by Donald Trump, the strategy of overthrowing is at the dead end he walked into willingly. Now he must either play his last card, that of military intervention, or run a new bluff, this time conducted from high echelons of the United States.

What is a bluff? It’s making the opponent believe that you are holding a better hand than you really have, raising the stakes, and waiting for the opponent to back down before you have to show your cards. When you show your cards, the bluff is revealed. Are Trump and the Operation Venezuela team willing to be exposed as bluffing?

Do they have an internal possibility of agreeing to the intervention? Would it be through Colombia? Are the Colombian elites willing? There are many questions that can be chained together to try to find an answer.

Perhaps the different central episodes, such as on Feb. 22 and 23, have been part of what was in the works from the first moment: the military intervention. That’s why they act so sure, that’s why there is an order of actions, of accusations, with the last one — which was already demonstrated with images that were mounted — that maintains that Maduro’s government burned trucks carrying humanitarian aid, which would be a crime against humanity. Was all this the groundwork for a scenario that will come and was always the main one? This will be known as more statements and actions are made.

The days are long in Venezuela, on the border. Leftist former Colombian presidential candidate Gustavo Petro,  — who has never expressed sympathy for the Maduro government — has characterized the existing scenario as a “de facto war declared by Colombia.” He also said that “Duque and Trump’s strategy is for a violent invasion.” The time to show their cards has come. We’ll see whether or not it’s a bluff.

Teruggi is an Argentine journalist living in Venezuela. The article and photo were first published at pagina12.com.ar on Feb. 25. Translated by WW managing editor John Catalinotto.