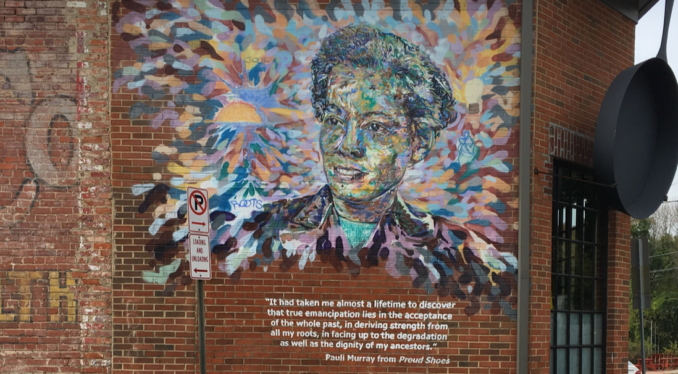 Civil Rights and women’s rights activist Pauli Murray was the brilliant theorist who laid the intellectual foundation for some of the most important Civil Rights victories of the 20th century.

Born in 1910 in Baltimore and raised in Durham, N.C., by her maternal grandparents, she went on to become the first African American to earn a Doctor of Juridical Science degree from Yale Law School in 1965.

Long before that, however, Murray had made her mark on history. In 1940, she refused to leave her seat in the whites-only section of a Virginia bus and was arrested for violating segregation laws. In 1944, graduating as valedictorian of her Howard University law class, she argued in her senior thesis — to public derision — that the 1896 “separate-but-equal” segregationist Supreme Court ruling in Plessy v. Ferguson should, could and would be overturned.

The late Supreme Court Justice Thurgood Marshall, while chief counsel for the NAACP, called Murray’s 1951 book, “States’ Laws on Race and Color,” the “bible” of the Civil Rights Movement. (tinyurl.com/y3af8h84)

But Murray’s skill went beyond merely compiling existing laws. In 1954 Marshall actually used Murray’s senior law school thesis as the blueprint for his argument before the Supreme Court in Brown v. Board of Education, leading to the historic 1954 victory overturning “separate-but-equal” segregation in public education.

In the 1960s, Murray began to argue that the Equal Protection Clause of the U.S. Constitution, in the Fourteenth Amendment, should be applied to cases of sex discrimination in the same way it was applied to racial discrimination. She coined the term “Jane Crow” in a 1965 essay to describe the sexist and racist discrimination she experienced. (Salon, Feb. 18, 2015, tinyurl.com/yykzkzf5) Murray went on to become one of the co-founders of the National Organization for Women in 1966.

In 1967 Murray co-wrote a brief in White v. Crook that ultimately struck down the constitutionality of the all-white, all-male jury system in the South. Gardenia White of Lowndes County, Ala., was the lead plaintiff in the case.

The case was initially filed to put Black people on the jury rolls in Alabama and then expanded to challenge a law that kept all women from serving on Alabama juries. Jury selection had become a movement focus because all-white juries were acquitting white supremacists in the murders of Civil Rights workers in Lowndes County.

The White v. Crook decision in 1971 not only brought an end to the systematic legal exclusion of Blacks from jury service. It also became the first U.S. case in which “a federal court relied on [equal protection in] the 14th Amendment to declare a state law unconstitutional because of sex discrimination.” (Dr. Susan Mallon Ross, “Dialogic Rhetoric,” tinyurl.com/zjjkzvw)

Ruth Bader Ginsburg, currently sitting on the Supreme Court, named Murray as one of the co-authors of her 1971 brief in Reed v. Reed, even though Murray had not actually helped write the brief. Ginsburg argued and won that case, which marked the first time the U.S. Supreme Court applied the Equal Protection Clause to a federal case of sex discrimination. Ginsburg wanted it on the record that Murray had laid the groundwork for the historic ruling.

Murray was also a groundbreaker in her personal life within the movement. She was a gender-nonconforming person who “favored a masculine-of-center gender performance during her 20s and 30s” and changed her name from Anna Pauline to be more gender neutral. She was open with friends, family and other Civil Rights leaders about her “passionate, romantic partnerships and friendships with women.” Her past participation with the Communist Party USA left her open to Red Scare harassment.

In 1977 Murray became the first African-American woman to be ordained an Episcopal priest and continued trailblazing until her death in 1985. Her childhood home in Durham is now a National Historic Landmark of the U.S. Park Service.

A loving tribute by local activists on “The Bulls of Durham” blog sums up her life of action against racism and sexism: “Pauli Murray had an incurable case of can’t-stop-won’t-stop.” (tinyurl.com/yxeb7hoo)