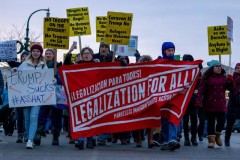 Hundreds of people poured into the streets Feb. 16 to demonstrate against the latest escalation of President Trump’s anti-immigrant policies.

The day before, Trump had declared a so-called “National Emergency Concerning the Southern Border of the United States.” Under the National Emergencies Act, the declaration could grant Trump new executive powers to allocate billions of dollars in funding toward further militarization of the U.S.-Mexico border. Trump claimed these measures will allow him to fulfill the racist “build the wall” narrative that he has used to mobilize his white-supremacist base.

With only a day’s notice, several hundred local residents and dozens of organizations responded to the call to protest Trump’s declaration, issued by the Minnesota Caravan Solidarity coalition, which includes the Minnesota Immigrant Rights Action Committee (MIRAC), the Anti-War Committee, Hands off Honduras and many more local organizations. Demonstrators took to the streets — marching through the immigrant-rich neighborhoods of South Minneapolis before packing the Walker United Methodist Church for speeches and planning further militant actions.

“We the immigrants, we built this country,” agreed MIRAC organizer William Martinez, an immigrant from El Salvador. “We are union members, teachers, nurses, people in construction and in the office. These are the people who built this country.”

A student, who had recently travelled to Tijuana, Mexico, to observe the conditions of refugees seeking asylum at the U.S. border, denounced the emergency declaration. “This is a deliberate abuse of power that is going to hurt the most vulnerable in Tijuana right now,” she said. “People fleeing violence have the right to go to a port of entry and ask for asylum, and that’s not what’s happening at our borders. Young people, LGBTQ people are being denied this right.”

The national Legalization for All Network put out a call for local protests after Trump declared a state of emergency, as have other national organizations and networks. Actions happened in several cities this weekend, and many more are planned around the country on Monday.

The Minneapolis event featured lively discussion of next steps in the fight against racist political attacks on immigrants.

“The media is going to be talking a lot about legal challenges to Trump’s declaration and also about legislation in Congress to stop it,” said Joe Callahan of Minnesota Caravan Solidarity. “But we don’t want to rely on those things, especially those legal challenges ending up in a Supreme Court that is very conservative.”

“A lot of the crises in Latin American countries that lead to their people seeking asylum in the United States are the result of aggressive U.S. foreign policy and military intervention,” said Autumn Lake of the Anti-War Committee. “When we are mobilizing in the streets, when we are voting, if we care about the plight of our migrant brothers and sisters from Latin America, it is imperative that we also put pressure on politicians to adopt anti-war, anti-imperialist stances.”

“This manufactured crisis is nothing more than a pretext to criminalize our immigrant neighbors, militarize our borders and erode our constitution,” said David Gilbert-Pederson, a trade unionist with Minnesota Workers United. “But we say no. We will march, we will rally, we will sit in, we will strike and we will shut this whole damn system down.”