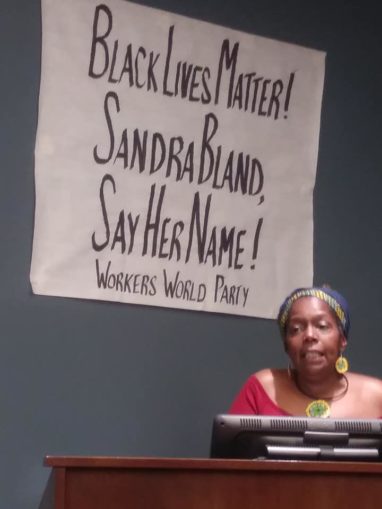 Dawn O’Neal at the podium.

Feb. 16 — The room at the Auburn Avenue Research Library for African-American History and Culture was filled to capacity, with over 100 people seated and others standing to watch the documentary film “Say Her Name: The Life and Death of Sandra Bland.” While the audience was diverse, the largest group was Black women of all ages.

Moorehead explained, “The murder of Sandra Bland was the lightning rod for the hashtag #Say Her Name as a component within the Black Lives Matter Movement.  It was a grim but important reminder that her case shined a bright light on how Black women/women of color are victims of police terror, but many still don’t get the national and international attention that Bland’s case did.”

Both she and O’Neal cited the names of several other women and girls killed by police as well as the disappearances and deaths of thousands of Indigenous women and gender-oppressed people, which underscores the need for more community organization and mobilization.

Following the film, Sandra’s older sister, Sharon Cooper, joined the program by teleconference, answering questions and sharing her family’s experience in fighting for answers about why and how their loved one died in jail.

This amazing dialogue, sponsored by Workers World Party in collaboration with the Auburn Avenue Library, was chaired by Dianne Mathiowetz. 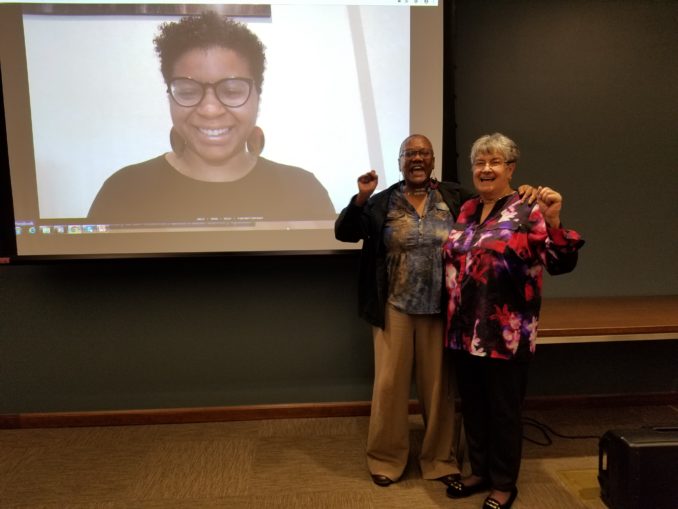