Over a dozen community groups and individuals who had campaigned or voted for Philadelphia District Attorney Larry Krasner delivered a letter to his office Feb. 6 expressing a sense of betrayal.

The letter opens: “We, the signatories of this letter, want to communicate to you our strong disapproval, anger and sense of betrayal regarding your decision to contest the ruling of Judge Tucker which reinstated Mumia Abu-Jamal’s rights of appeal. We demand that the district attorney’s office immediately drop its appeal of the ruling.” 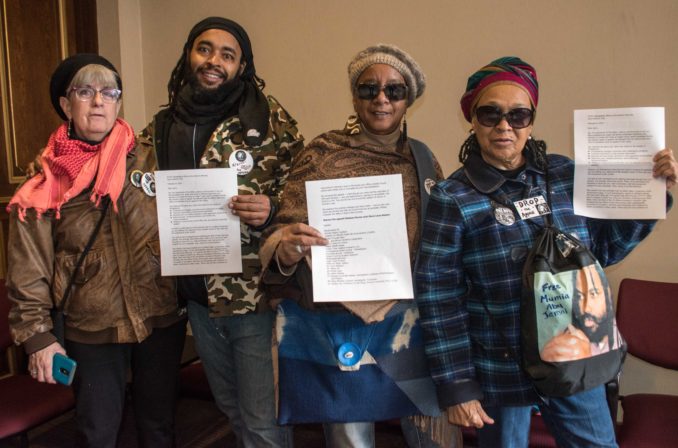 The signers “applaud the positive changes” Krasner has made. However, the letter goes on to say, “You told us that investigating and righting past legal wrongs was your priority. You strongly disavowed racism. Many of us canvassed and knocked on doors for you, held fundraisers and built grassroots support for your campaign. Now, many of us feel betrayed.”

After describing some of the unjust practices during Abu-Jamal’s 1982 trial, the document argues, “By pursuing this appeal — even though you were not the originator of this past injustice — you are legitimizing it, saying it is acceptable. We think it is not.”

Judge Leon Tucker ruled Dec. 27, 2018, that according to the Pennsylvania Rules of Judicial Conduct, former PA Supreme Court Judge Ronald Castille was biased and should have recused himself from hearing Abu-Jamal’s appeals. Tucker’s ruling granted relief to Mumia by giving him the right to reopen his appeals.

But Krasner filed an appeal of Tucker’s ruling Jan. 25, in effect defending decades of prosecutorial misconduct by previous DAs. He said, “That opinion has sweeping and, in our view, problematic implications for a large volume of cases, in addition to its effect on the case of Mumia Abu-Jamal.” (bit.ly/2HGjyJ1)

So the politician who claimed to be against mass incarceration and who promoted reviewing past convictions and freeing the wrongfully convicted now opposes a court decision because too many imprisoned men and women might benefit — because that is too much justice!

An online version of the letter has been made into a petition. You can add your name at tinyurl.com/yy5vywrx.