Plans for demonstrations to stop U.S. aggression against Venezuela have been gathering support in New York, across North America and throughout the globe. Many of these actions stem from strong feelings among the peoples of the world in solidarity with Bolivarian Venezuela and an equally strong desire to stop Yankee imperialism. 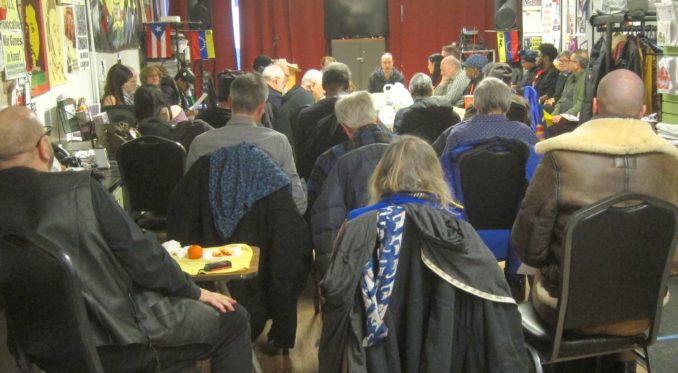 On Feb. 9, a large, enthusiastic and dedicated crowd of activists gathered in New York to plan that city’s Feb. 23 march on Wall Street to protest U.S. threats and actions against Venezuela.

One such initiative taking place in the heart of imperialism has been the appeal published on nowaronvenezuela.org (No War on Venezuela) to hold coordinated demonstrations in various cities on Feb. 23.

In discussions with some of the organizers of this action, Workers World learned that this international campaign in support of the Bolivarian Republic of Venezuela is growing stronger daily. To date, over 150 organizations and more than 2,000 endorsers have signed the statement in solidarity with Maduro and the Venezuelan people. The nowaronvenezuela.org website is getting thousands of hits a day. (To aid local organizers, the website has information on Venezuela, graphics and a toolkit of resources for organizers to use.)

The organizers plans to continue pushing the mobilization with new daily contacts. As of today, groups in 25 North American cities are already planning actions. The organizers expect this momentum to continue and to spread to other countries. Already protests have been called in London; Moscow; Rome and Turin, Italy; Dhaka, Bangladesh; and Valletta, Malta.

One thing organizers feel good about is that people around the world have translated the original English and Spanish statements into Portuguese, German, Russian, Chinese, Farsi, French, Italian, Greek, Serbo-Croatian, Tagalog, Haitian-Creyol and Bengali. A Romanian translation is expected soon. That the statement has been produced in so many languages has been useful for distributions in communities in the U.S. where that language is spoken. It has also brought in support and solidarity from around the world.

Organizers have used social media to reach out to a mass audience, including Facebook, Twitter and Instagram. They ask readers to “follow” the messages and help get the message out. The more people who hear about this online, they say, the more people will show up in the streets. To post online use hashtags #23feb and #handsoffvenezuela.

One signer, Julio, from Venezuela, explained his reasons: “My country is a country of peace, we just want respect, we choose our own leaders. Trump, stop now with your predatory imperialist politics. Our only crime is wanting to be independent and a sovereign country. Yankee go home!”