After the successful Los Angeles teachers’ strike, school support staff in Issaquah, Wash., learned that even the threat of “shutting shit down” is enough to make bosses tremble. A huge majority of office professionals in the Issaquah Chapter of Public School Employees of Washington, represented by Service Employees (SEIU) Local 1948 and Paraeducators in SEIU Local 925, voted to authorize a strike on Jan. 15. Among the lowest paid in the district — near Seattle’s booming tech industry — workers testified to that fact at two school board meetings. They’d also filed grievances against the district for being unwilling to bargain in good faith and provide workers with a cost of living agreement they had committed to in past contracts.

The district continually ignored the workers until the strike authorization, finally offering a tentative agreement on Jan. 24. So on Jan. 29, instead of going on strike, the workers overwhelmingly voted to approve the agreement, which includes a 3.1 percent cost-of-living adjustment (COLA) over two years, with 1.9 percent retroactively covering the 2018-19 school year.  As one elected strike committee member said, “All we wanted was for the district to acknowledge our important work in keeping Issaquah schools safe places for kids to learn.” The COLA increase “helps us keep up with our region’s growing expenses so we can be at our best on the job.” (seiu925.org, Jan. 25) 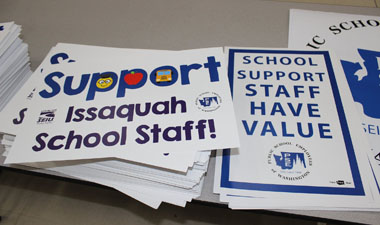 The district has repeatedly pushed misleading messages to both the public and the union in its “offers” — like claiming there’s no money for COLA increases when money was already allotted. In a racist act on Jan. 24, the district’s human rights department wrote to school administrators threatening to report teachers with visas to immigration officials if teachers struck. Though it was soon rescinded, damage had already been done to both teachers and immigrant students. (In These Times, Jan. 25)

The DCTA negotiators walked out of a raucous public negotiating session Jan. 31, rejecting the district’s latest proposal. The district maintains it has offered as much as it can without help from the state, which has said it will decide by Feb. 11 whether to delay the process six months. The strike could begin soon after if the state doesn’t join negotiations. (Colorado Public Radio, Feb. 1)

Leticia Vallejo, a housekeeper at a Marriott hotel in Irvine, California, filed a lawsuit in State Superior Court on Jan. 27 alleging her supervisors created a hostile work environment because they didn’t do enough to protect her from guest misconduct. The suit grew out of an incident in the summer of 2017 when a drunk male guest groped Vallejo while she was cleaning the hotel lobby bathroom and then offered her $50. When she complained to her supervisors, they laughed and said, “He should have offered you $100.” Though she subsequently requested a sign to block the bathroom entrance while she was working, the small one management provided didn’t deter customers. During the 18 years Vallejo has worked at the hotel, she said men often urinate in front of her and make inappropriate advances. And not just to her, to all housekeepers.

After Vallejo filed a notice with the California Department of Fair Employment and Housing, she was issued a right-to-sue letter prior to filing the lawsuit. Vallejo is seeking unspecified damages and injunctive relief. “I don’t want other people to go through this,” she said. Along with 120 other back-of-house employees she voted to join UNITE HERE 11 at Marriott Irvine in January.

Meanwhile, the Marriott corporation announced it was issuing “associate alert devices” across all locations last September — before UNITE HERE’s  stunningly effective nationwide strike. The technology was designed to send notification allowing management to locate the worker who activated it. But Vallejo and others are still waiting for that protection. (Bloomberg, Jan. 28) Maybe workers throughout the Marriott system should strike again to force the company to deliver.