Bulletin, Jan. 29 — Yesterday the U.S. government announced new sanctions against PDVSA, Venezuela’s nationalized oil company. These sanctions freeze Venezuela’s funds. They are intended to force a transfer of control of the company to the right-wing opposition forces, led by Juan Guaidó. In the face of this aggression, and continued U.S. military threats, the peoples of the world are showing their support for the Bolivarian government and its President Nicolás Maduro. In the U.S., anti-imperialist forces and all progressive people are calling on the people to take to the streets to fight to prevent further U.S. intervention in Venezuela and to end the imperialist war threat.

Jan. 27 – After three days of mass demonstrations in defense of the government of Nicolás Maduro and the Bolivarian Revolution, Jan. 26 looked like a normal Saturday in Caracas. With these demonstrations, the Venezuelan people send a clear message of unity in the face of a coup attempt planned and directed from Washington, D.C.

Meanwhile, the geopolitical dimension of the of the coup attempt continued its course, as a special session of the U.N. Security Council took up Venezuela. Once again, the imperialist block tried to pass a resolution in an international body to recognize the coup government led by the lackey Juan Guaidó. 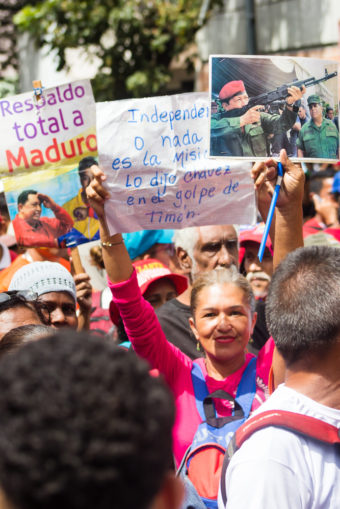 Despite opposition efforts to take the country by force, “chavismo” — the movement inspired by the late Venezuelan President Hugo Chávez — has defended itself with massive mobilizations, beginning on Jan. 23 and continuing for several days after, including a large march in the northern state of Vargas on Jan. 25. Once again chavismo has demonstrated that it is a movement of the people, and not the dictatorship the opposition claims.

According to recent surveys, between 37 percent and 41 percent of Venezuelans consider themselves “chavista,” the term for supporters of the Bolivarian Revolution, and they are highly organized through a network of grassroots agricultural and production committees, community organizations, Bolivarian militias, and national political organizations. After two decades of the revolutionary process, the Bolivarian movement can mobilize overnight and fill the major avenues of Caracas.

The popular strength of chavismo is reflected in the loyalty of the armed forces, who have rejected Guaidó’s call for support. The vast majority of civil and legal authorities in the country have also come out in support of the Bolivarian government.

But the ongoing effects of U.S. economic sabotage and currency manipulation have not disappeared. U.S. sanctions are estimated to have cost the Venezuelan government $20 billion in 2018 alone. (tinyurl.com/yb5wjuu2)

The Venezuelan government is introducing new policies intended to alleviate the economic crisis, including an increase in the minimum wage and laws targeting businesses that use illegal market exchange rates to justify exorbitant prices for necessities.

In addition to its support for the coup government, Washington threatens new and harsher sanctions against Venezuela. There have also been reports that the U.S. government may attempt to seize the assets of Citgo, a subsidiary of Venezuela’s national oil company that operates in the U.S.

In the Security Council session, 19 of 35 countries came out against U.S. interference in Venezuela. A common theme among these countries, which include Cuba, Bolivia, China, Russia, Mexico, South Africa, El Salvador, Nicaragua, Uruguay, Barbados, Equatorial Guinea and Dominica, was the need to respect the sovereignty of the Venezuelan people.

The Cuban representative reminded the Council of the many dictatorships U.S. imperialism imposed on Latin American countries in the 20th century, and stressed the right of national sovereignty for the nations of the hemisphere. Cuba also highlighted the role the U.S. government has played in previous attempts to overthrow Bolivarian rule specifically.

The Russian and Chinese governments also reiterated their support for the legitimate government of Venezuela, reminding the council of the elections held in May in which Maduro was re-elected. Both governments recently signed trade deals with Venezuela intended to help counter the economic pressure of U.S. sanctions.

The diplomatic victory at the U.N. comes just days after the U.S. and its puppet governments failed to pass a similar motion in the Organization of American States, an organization that has been dominated by U.S. imperialism throughout its existence.