In recent months the struggle for the rights of the Palestinian people has seen an increase in Zionist attacks on Black activists who support the Boycott, Divest and Sanction movement. The goal of BDS is to stop the Israeli state’s genocidal policies and actions toward Palestinians, including putting pressure on corporate entities to cease doing business with Israel.

On Jan. 4, the Birmingham Civil Rights Institute rescinded a prestigious human rights award it had previously announced would go to legendary Black activist Angela Davis. When Davis pressed for a reason for the reversal, her staunch and vocal support for BDS and Palestine was ultimately named.

This attack on Davis is very similar to the recent firing of Black commentator, Marc Lamont Hill — fired from CNN for publicly supporting the Palestinian people’s right to return to their own homeland.

On Jan. 7, Davis issued a statement reading in part: “I have devoted much of my own activism to international solidarity and, specifically, to linking struggles in other parts of the world to U.S. grassroots campaigns against police violence, the prison industrial complex, and racism more broadly. The rescinding of this invitation … was thus not primarily an attack against me but rather against the very spirit of the indivisibility of justice.” (Guardian, Jan. 8) 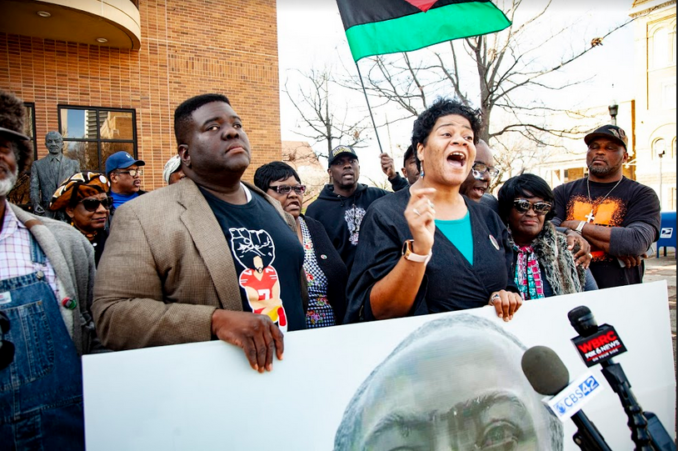 Davis, born and raised in Birmingham, Ala., is a historic figure internationally in the struggle for human rights and justice.  The city was once known as “Bombingham” because of the Ku Klux Klan campaign of terror against the Black Civil Rights Movement. The church Davis attended, the 16th Ave. Baptist Church, was bombed on Sept. 15, 1963; of the four young Black girls killed that day, two were friends of Angela Davis.

As a prisoner abolitionist, she defended the martyred Black Panther member George Jackson before he was executed in San Quentin Prison in 1971. Also a member of the Communist Party USA, she became a political prisoner herself when she was falsely arrested by the state of California and charged with three capital felonies and conspiracy to murder, related to an attempt to free Jackson from prison in 1970. A worldwide campaign freed her in 1972.

The award Davis was originally to receive from the BCRI was the Fred L. Shuttlesworth Human Rights Award. Davis knew Shuttlesworth personally as an indomitable leader in Birmingham during the Black Freedom Movement, surviving beatings, assassination attempts and bombings.

After the decision by the BCRI board to rescind the award, there were immediate protests and rallies by Birmingham activists, including many who explicitly support the Palestinian struggle.

At the same time it became clear on a wider public level that Zionist pressure had been exerted. Objections to Davis evidently came from the Birmingham Holocaust Education Center. However, it should be noted that, in the U.S. South, it is common for right-wing, almost exclusively white, Christian churches and denominations to hold tenaciously Zionist views.

These are based on an anti-Semitic, end-of-the-world theology that the second coming of Christ cannot occur for Christians without the dominance of Israel in certain geopolitical events. These views are held at the national level by such public officials as former U.S. Attorney General Jeff Sessions.

As support grew for Angela Davis, and by extension the Palestinian struggle, on Jan.10, the activist group Jewish Voices for Peace released an open letter signed by more than 350 distinguished academics.

The letter read in part: “The cancelling of this award by the Birmingham Civil Rights Institute is unjust, insulting and ill-conceived, especially because it is likely premised on Professor Davis’ long-standing support for Palestinian human rights. The decision seems to stem from a misinformed view that to advocate for Palestinian human rights is somehow offensive to the Jewish community.

“As a Jewish organization dedicated to justice, dignity and equality for all people in Palestine/Israel, we share Professor Davis’ visionary commitment to the ‘indivisibility of justice,’ and believe we are all responsible for pursuing social justice for all human beings, without exception — which includes pursuing social justice for Palestinians.” (tinyurl.com/ybpkj769)

On Jan. 14, the board of the Birmingham Civil Rights Institute publicly apologized to Davis for its “missteps” in offering and then withdrawing the award. Finally, on Jan. 25, the BCRI reinstituted the award to Angela Davis “in keeping with its commitment to learning from its mistakes.” (al.com)

The mounting campaign for acknowledgment of the justice of Davis’ principled stand for the Palestinian people was the primary factor in that “learning” — and this victory.