The 1,800 mostly Latinx farmworkers who pick Halo mandarin oranges and clementines for the Wonderful Fruit Company in Kern County, Calif., have successfully forced the bosses to retract a pay cut — which would have reduced their earnings from $53 a bin to $48. On Friday, Jan. 11, these contract workers walked off the job. They showed up on Monday to protest at the Halo plant in Delano. (Los Angeles Times, Jan. 14)

Workers won by spreading word of their protest on social media and also inviting the United Farm Workers to join the picket. After four days, the company agreed to restore the higher pay rate. UFW leader Armando Elenes noted: “This is another example of how when farm workers organize together to defend themselves, we win!” Before ending the strike, the workers announced that they “stand in solidarity with the United Teachers of L.A. and their strike for a fair union contract.” 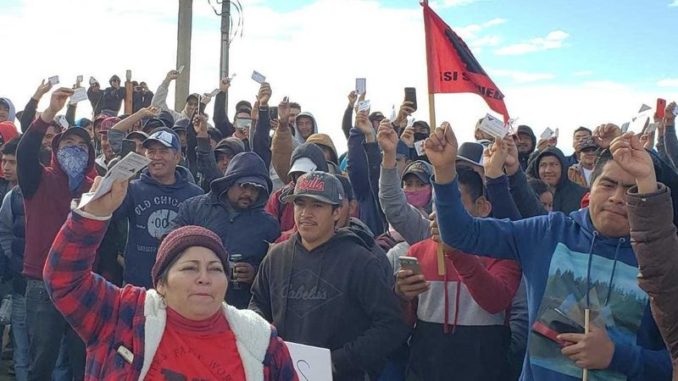 The 520 sanitation, production and maintenance workers at the General Mills cereal plant in Cedar Rapids, Iowa, voted Jan. 9 to join the Department Store Union (RWDSU) Local 110 after they realized the company was whittling away their benefits and using temp agencies to exploit cheaper labor. Having the company cut the number of workers’ absences from five to three days a year pushed them to organize. (Minnesota Star Tribune, Jan. 10)

In a Local 110 statement, General Mills worker Tim Sarver said, “I’m proud to say I’m now part of the RWDSU and I know everyone who works alongside me knows that representation from the union will change our future here. It’s about time General Mills workers had a real seat at the table with the company and we’re ready to get to work on a fair contract.” The RWDSU, with 100,000 members nationwide, is affiliated with the Food and Commercial Workers (UFCW) and represents workers at a nearby Quaker Oats plant.

After a New Year’s Eve attack on a McDonald’s cashier in St. Petersburg, cashiers, cooks and custodians there and in Tampa and Orlando restaurants held a wildcat strike on Jan. 8, in partnership with Fight for $15 and Black Lives Matter. They demanded store security protocols, protection for workers and a voice for the mostly Black and Brown women workforce. Gail Rogers, a Tampa worker who helped organize the walkout, told WFLA-TV, “I’m going on strike because at McDonald’s we’re subjected to all types of behavior that has no place at work — from physical attacks and armed robberies, to sexual harassment, to racial discrimination. We won’t back down until McDonald’s takes responsibility for protecting all workers on the job.” (Newsweek, Jan. 8)

Some 88 car wash workers, including immigrants from the Dominican Republic, Mexico, Nigeria, Mali and El Salvador, will receive as much as $90,000 in back pay as part of a more than $5 million wage theft settlement with the owner of four car washes in Manhattan, the Bronx and Elizabeth, N.J. The men worked outside with chemicals and water under brutal conditions in all kinds of weather, with no meal or rest breaks, for $4 to $5 an hour — well below the minimum wage. The settlement covers employment from 2007 through 2014, when court-appointed trustees were put in place to manage the car washes and pay a legal wage. (amny.com, Dec. 20)