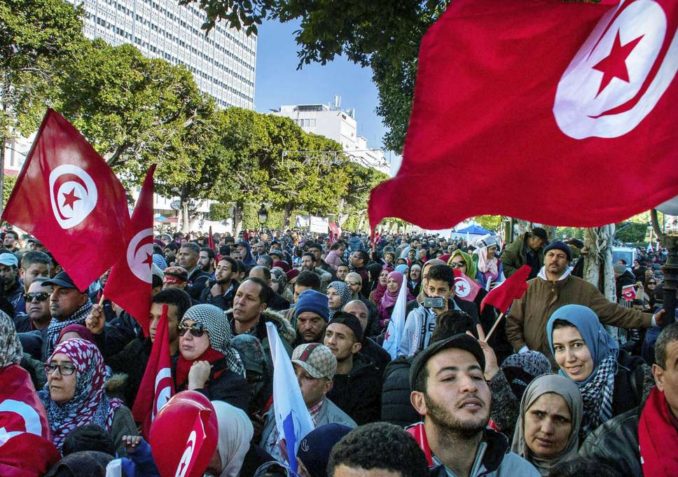 Around 700,000 Tunisian workers — public employees and workers in state-owned companies — carried out a one-day general strike on Jan. 17.  They want a raise that keeps up with inflation and an end to the meddling of the International Monetary Fund.

In Morocco, 150,000 municipal employees joined civil servants working for the district and other local government institutions in observing a 24-hour strike to protest what they called “catastrophic” working conditions. Negotiations between the local governments and the unions representing the workers had broken down.

In Tunisia, the strike was called by the Tunisian General Labor Union (UGTT), the largest and most powerful trade union confederation in the country.  In Morocco, the strike was called by the Moroccan Workers’ Union (UMT), the Democratic Confederation of Labor, the Democratic Federation of Labor and the General Union of Moroccan Workers.

Abdennacer Jamal el-Khabbouli, deputy secretary-general of the Democratic Organization of Local Municipalities, said dialogue with the government had been strained since 2007.

“Many agreements reached with the government in 2007 have not been implemented,” he said.

UMT said in a statement that the strike was a “protest against the targeting of trade union freedoms, the right to organize trade unions, the delay in social dialogue and the infringement on workers’ rights.” (Al Jazeera, Jan. 18)  All the unions involved in the strike asserted that workers need a substantial raise, even though inflation is only 1.5 percent, according to the International Monetary Fund.

The union alliance in Morocco underlined its demands: “Despite the appeals launched by the unions, the minister of the interior has remained resistant to the demands of the working class.”

In Tunisia, the UGTT held a number of militant rallies, even in remote cities on the edge of the Sahara. Rail, bus and air traffic stopped while schools, ports, hospitals, government offices and state media were affected.

The IMF, which advanced Tunisia a $2.8 billion loan in December 2016, has been putting pressure on the Tunisian government to tighten spending on public service workers, which accounts for 15.5 percent of government outlays. According to the IMF, this is one of the highest levels in the world.

Sami Tahri, deputy secretary-general of the UGTT, said the government is under the dictates of the IMF and has chosen the difficult solution of confrontation with public servants.  He proposed that the UGTT should directly negotiate with the IMF. (Tunisie Numerique, Jan. 19)