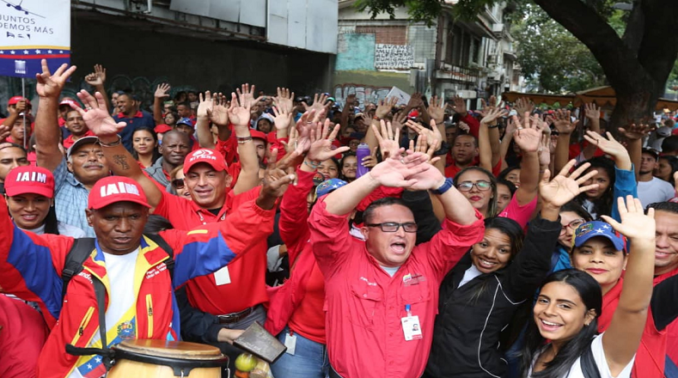 We reject the coup attempt of the U.S. government against the Bolivarian Republic of Venezuela, which ignores and violates the sovereign decision of the Venezuelan people who, in an absolute democratic and transparent election, in the presence of international observers, elected Nicolás Maduro as their legitimate President last May.

On Jan. 22, U.S. Vice President Mike Pence sent a recorded message out that was broadcasted by 2,527 media outlets for three days in coordination with the shadowy Organization of American States (OAS) calling for subversion against Maduro’s government.

Before the eyes of the world, and in the most grotesque manner with the absence of opposition involvement, this new attack was openly done by the one who pays and rules. They spoke and presented their new puppet they had prepared for the occasion, Juan Guaidó, announcing him on the stage for the world to see.

The National Assembly, a body that represents no one, in contempt for the violation of the principles of the Constitution, responds directly to U.S. interests, and whose rotating presidency was held by Guaidó [who was] named president of Venezuela out of thin air. It would be laughable if the facts were not so serious and the stability of the region was not put at high risk.

Donald Trump quickly gave recognition to Guaidó through twitter, immediately followed by the vile secretary of the OAS Luis Almagro, the mafioso of Miami Marco Rubio and part of the cartel of Lima.

It did not take long to learn that Guaidó, unknown until three days ago, was selected by USAID [U.S. Agency for International Development] and the U.S. intelligence agencies as the clown on duty to play such an embarrassing and usurping role. He says he will carry out a transitional government, to which the people, the Bolivarian National Armed Force (FANB), or any other institution did not respond.

Nicolás Maduro Moros holds the Presidency of the Republic and is the one who was elected by the overwhelming majority of the Venezuelan people with more than 67 percent of the votes. The so-called new president has sought refuge in an embassy — in other words he is in foreign territory knowing that his actions are illegal and a crime against the Constitution.

The Bolivarian National Armed Force and the military high command are on alert and have reiterated their allegiance to Maduro.

Faced with imperial interference and the attempted coup d’état, the government of President Nicolás Maduro has broken diplomatic relations with the United States and has ordered personnel of the U.S. government to leave the country in 72 hours.

This is a dangerous new move against Venezuela and sets the stage to try and legitimize a military intervention.

We call on the friends of Cuba and Venezuela in the world, the men and women of goodwill, to support the legitimate President Nicolás Maduro, his government, and the people of Venezuela.

#Venezuela Is Not Alone!