Tens of thousands of protesters marched in 89 cities around the world on Jan. 19 in conjunction with the third annual Women’s March in Washington, D.C. The massive demonstration there two years ago — to protest Donald Trump’s inauguration as president — along with coordinated actions across the U.S., marked the largest protests in U.S. history. Millions participated. In solidarity, actions were held around the globe.

This year, U.S. demonstrations took place from coast to coast to protest the racism, xenophobia and misogyny emanating from the White House and to demand rights for women, people of color, workers and gender nonconforming people. However, there were deliberately divisive racist and Islamophobic slanders against Women’s March Inc. leaders of color.

Spurious, bogus attacks were leveled by the corporate media and Zionist and other right-wing forces against Tamika Mallory, Carmen Perez-Jordan and Linda Sarsour for alleged “anti-Semitism.” They were also criticized for supporting Palestinian rights. Sarsour, who is proudly Palestinian and Muslim, is recognized as a strong defender of the Boycott, Divestment and Sanctions campaign exposing Israel as an oppressor of the Palestinian people.

Even though many march organizers around the country had supported women Democratic candidates running for Congress in the midterm elections, the Democratic National Committee caved in and dropped its sponsorship of the Washington demonstration in response to the attacks. A rival group, Women’s March Alliance, which organized separate marches in some cities, did not address racism, xenophobia and Islamophobia.

However, Planned Parenthood stayed strong, among many other groups, as did Randi Weingarten, president of the American Federation of Teachers, who is Jewish.

Around the country, marchers lined up with one grouping or the other. In some cities, there were two actions. Unfortunately, a few marches were cancelled. Women’s March, Inc. mobilizations stressed the importance of leadership by women of color in over 200 sister actions.

In an interview with CBS, Sarsour said the real controversy should be about a president who cages migrant children, shuts down the government, sides with white supremacists and is complicit with the war on Yemen. (Jan. 17) 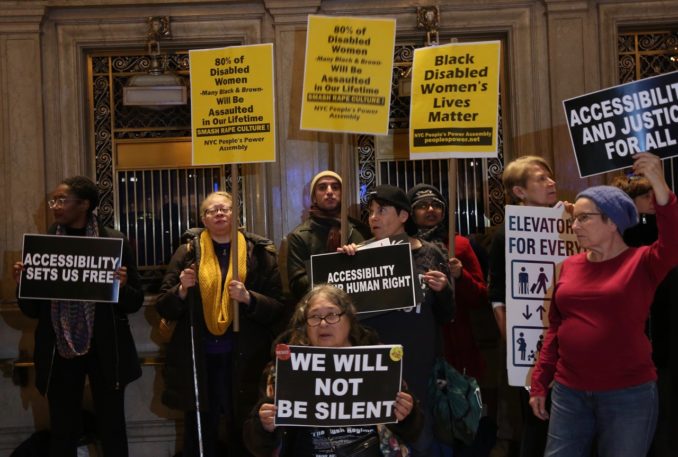 Tens of thousands of people gathered at Federal Plaza in Washington. Many in the multinational, multigender and multigenerational crowd traveled there to support inclusivity and equality for all women. The appointment of misogynist Brett Kavanaugh to the Supreme Court had motivated some women to participate. Government workers showed their anger at the government shutdown and withheld paychecks.

Speakers, mainly longtime activists and women of color, called for the shutdown to stop and federal workers to be paid. They raised many women’s issues and promoted the rights of LGBTQ people. The need for an intersectional women’s movement was stressed. Perez-Jordan reiterated that she and the other women leaders condemned anti-Semitism, homophobia and transphobia. Mallory stated her solidarity with her Muslim, Latinx, Asian, disabled and Jewish sisters.

Near the stage, Indigenous women held a banner calling attention to the number of Missing and Murdered Indigenous Women, Girls and Two-Spirits.

In New York City, there were three protests. The Women’s Unity Rally held near government buildings in Foley Square drew between 4,000 and 5,000 people. It was organized by the Women’s March NYC, which was affiliated with the D.C. protest, and by the New York Immigration Coalition. It brought in a myriad of issues, struggles and forces, including im/migrant rights, sexual abuse, and workers’ and LGBTQ rights.

The spirit of solidarity permeated the multinational, multigender, multigenerational crowd. Maya Edery of Jewish Voice for Peace stressed: “We should always be following the leadership of those most impacted by oppression, and this rally really uplifts the leadership of women of color, which is why I chose to be here.” (Gothamist.com, Jan. 20)

As Women’s March NYC director Agunda Okeyo spoke, a right-wing Zionist seized the microphone to disrupt the rally, but was quickly escorted offstage. Okeyo refused to be silenced.

Some political figures promoted voting as the means to make social change. Many other speakers stressed the need for an intersectional women’s movement, led by women of color, low-income workers, immigrants and LGBTQ people.

Workers World Party was there in a contingent with the People’s Power Assembly/NYC, Gabriela, the International Working Women’s Day Coalition and International Women’s Alliance. With them were Honduran activists holding placards calling for solidarity with the Honduran resistance and honoring murdered Indigenous leader and environmentalist Berta Caceres.

A powerful Non-March for Disabled Women held inside Grand Central Station after the Unity Rally demanded rights for people with disabilities, including accessible subway transportation. Rise and Resist organized it and Women’s March NYC supported it. People’s Power Assembly/NYC participated.

The Women’s March Alliance, the group that had split from the Women’s Unity Rally over the bogus charge of anti-Semitism, was organized by Katherine Siemionko, a former Goldman Sachs vice president. It held a march on Manhattan’s Upper West Side.

Boston: ‘Until all voices are heard’

Gathered behind a beautiful red banner that declared, “No More Stolen Sisters!” the Indigenous people’s contingent, organized by the United American Indians of New England (UAINE), led the crowd of thousands through Boston’s streets. The theme of this Women’s March was “Until all voices are heard.”

UAINE leader Mahtowin Munro opened the rally with an impassioned speech, focusing on the epidemic of Murdered and Missing Indigenous Women, Girls and Two-Spirits (MMIWG2S). She connected this racist, anti-women violence to the rise of white supremacy, coupled with the construction of pipelines on Indigenous lands.

Munro further addressed the colonial border violence impacting migrant women and their families and demanded that “this genocidal U.S. government policy must be stopped.” She called for action to support Indigenous peoples’ resistance across the globe, from Palestine and Puerto Rico to Chile and British Columbia. She gave support to struggles for land rights by the Mashpee and Aquinnah Wampanoag people and the movement to eliminate racist depictions, from sports mascots to the bigoted Massachusetts flag.

Kristin Turgeon, representing the Women’s Fightback Network, highlighted her struggles as a young disabled woman facing the challenges of “inaccessible train stations, streets and buildings; an extremely high rate of unemployment; and a lack of education, to the point where people don’t know how to communicate with us.” She stressed that the answer to capitalist-caused racism, sexism, homophobia, ableism and war lies in forging unity and fighting for a socialist society.

About 80,000 people turned out at the Women’s March in Denver. Members of Indigenous nations and many other people of color and sexual orientations were among the mostly young protesters. Signs demanded equality, and many expressed anger at Trump and the Republican Party for their mistreatment of migrants and demands for government funds to erect a barrier wall on the southern border with Mexico. 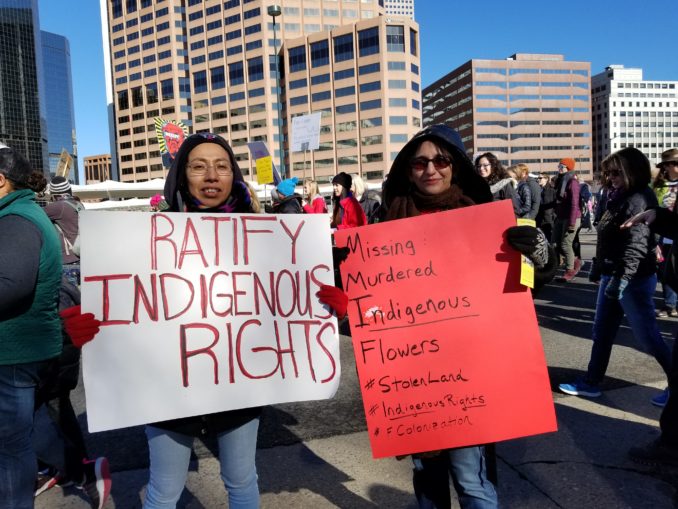 In Seattle, a large contingent of Indigenous people led the mile-long Womxn’s March of 20,000, which was peppered with signs and banners on various issues.

The next day, 500 Indigenous people and their supporters marched to Seattle City Hall in the MMIWG2S March. Rally leader Earth-Feather Sovereign of the Colville Confederated Tribes said: “There’s an undeclared war against our people, especially toward our women, and especially from the corporate cartels which dig up and destroy Native lands.”

At the spirited rally, marchers drummed and sang the song of the American Indian Movement. Abigail Echo-Hawk, author of a study by the Urban Indian Health Institute, reported on the thousands of missing and murdered Indigenous women, adding that many city police departments do not classify Indigenous women in compiling their reports.