Some 30,000 Los Angeles public school teachers and professional staff in the country’s second largest school district went on strike Jan. 14, marching through the rain from City Hall to the Los Angeles Unified School District office a mile away. The rain did not dampen their spirit, their unity or their overwhelming support from the city’s diverse working-class communities, filled with many people of color, whom they serve.

For the first time in 30 years the teachers, majority women and mostly women of color, went out on strike. Represented by United Teachers Los Angeles, they had battled LAUSD for nearly two years without a contract, through months of bad-faith bargaining with many unfair labor practice charges.

The union calls the strike “a struggle to safeguard the future of public education.” 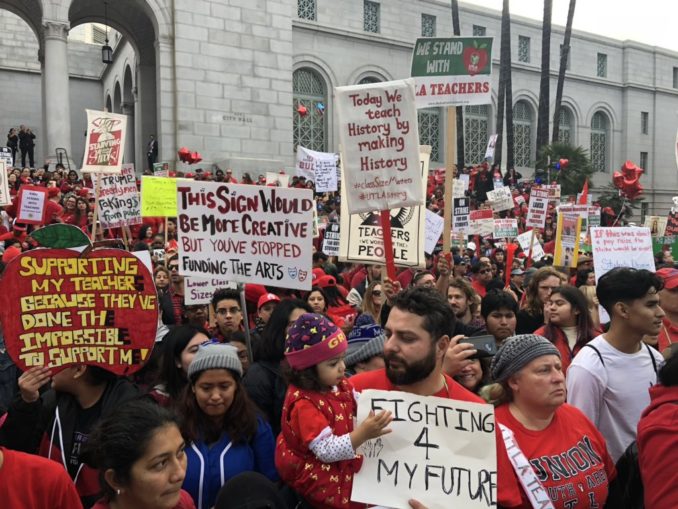 During 12-hour days beginning Jan. 17, UTLA has been negotiating with the LAUSD board to hammer out such issues as using the district’s $1.9 billion unrestricted reserves to fund smaller class sizes; more nurses, counselors and librarians; more support for special, early, bilingual and adult education classes; and empowering parents and educators by strengthening Local School Leadership Councils.

While bargaining has been behind closed doors at City Hall, with Mayor Eric Garcetti mediating negotiations, the Jan. 19 L.A. Times leaked that LAUSD has already agreed to new hiring. That means the strike has already won some recognition of the union’s demand for fully staffed schools and smaller classes.

Meanwhile, Los Angeles County supervisors have agreed to find up to $10 million to expand district nursing services for next year, and Gov. Gavin Newsom has agreed to use an increase in state tax revenue to boost funding for education statewide.

Not only have teachers been walking picket lines in front of their schools as well as at City Hall, they have also prepared meals for their students. With donations from neighborhood grocers and union funding, they are making brown-bag lunches for students who depend on meals they receive at school.

In an act of solidarity, the National Football League Players Association sent pizzas to teachers at several schools “so they could be sustained and continue to strike.” (CBSLA, Jan. 18)  Local businesses have been delivering food to picket lines, including hot coffee, bagels and tacos.

In another Jan. 19 L.A. Times article, UTLA President Alex Caputo-Pearl told a rally that the strike has “stunned our naysayers.” Asking the crowd, “If you’re a boxer, do you know what you do?” He answered: “You double down and keep on punching.”

Struggle of public schools vs. charters

Caputo-Pearl and other current union leaders became determined to revitalize the UTLA after mass layoffs destabilized the district during the 2008 recession, according to a Jan. 19 article in The Nation. They responded by forming the Union Power caucus. Inspired by the successful 2012 Chicago Teachers Union strike, the caucus has been working with CTU and other union reformers ever since.

UTLA’s strategy is based on what some unions refer to as “bargaining for the common good.” The Nation article explains: “[T]he idea of introducing demands in collective bargaining that benefit the community as a whole, not just the union’s membership … has been a way not just to revitalize stagnant unions but to reinvigorate interest in the public sector as a whole. It also means that when teachers take to the streets, they have parents willing not just to join them, but to take risks of their own.”

The major issue that continues to loom at the bargaining table — not just in L.A. but for school districts all across the country over the last decade — is the lucrative, profit-driven charter school industry. Charter schools not only leach millions of dollars out of public education funding but also commandeer huge amounts of square footage in taxpayer-funded, school-building real estate.

Ultimately the struggle in L.A. comes down to preserving public education with adequate funding and staffing for the masses of working and poor people. L.A. teachers are fighting against for-profit privatization — what a Jan. 10 article in Capital & Main calls “radical restructuring,” which seeks to aggressively dismantle traditional public education.

An arch advocate of radical restructuring, LAUSD Superintendent Austin Beutner was appointed to his post in May. He was hired based on his success in the capitalist financial world, despite lacking experience in education. While Beutner hasn’t yet revealed his plans for the district, he did hire Cami Anderson, who, as superintendent of Newark, N.J., schools, instituted a business plan called the “portfolio model,” which included closing neighborhood schools, replacing them with charters, and mass firings of teachers and principals.

The Capital & Main article points out that Anderson was driven out by a revolt of angry parents and wonders why Beutner and the LAUSD board think the portfolio model would work better in L.A. than in Newark.

“They don’t see the unchecked growth of largely unregulated charter schools as a problem, despite more and more evidence that charters discriminate against [students with disabilities], increase racial stratification and on the whole do not perform better than traditional schools. On the contrary, they view charter expansion as elemental to the future of the district.”

It’s way too soon to predict how this critical issue will play out in L.A. But having widespread community support for the teachers is a definite plus.