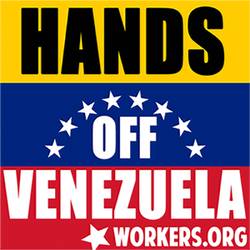 Bulletin, Jan. 22 — The Venezuelan Ministry of Defense announced today that the Bolivarian Armed Forces had repelled an attempted attack on their facilities in Caracas. At 2:50 a.m. local time, “A small group of assailants assigned to the zone commando No. 43 of the Bolivarian National Guard, betraying their oath of allegiance to the Homeland and its institutions, moved on two military vehicles, then broke into the headquarters of the urban security outpost located in the town of Petare, Sucrem, removing a cache of weapons of war and kidnapping under threat of death, two officers and two national guard members of the aforementioned outpost,” said Captain Gerson Soto Martínez, commander of the Macarao police coordination post. (Telesur English, Jan. 22)

The captain also said that the criminals surrendered and were captured, their weapons recovered, and they are providing information to intelligence agencies. The Bolivarian Armed Forces categorically rejected the acts of the low-ranking officers of the National Guard.

While the immediate coup attempt appears crushed, it takes place amid a growing effort by U.S. imperialism and reactionary forces in Latin America to overthrow the legitimate Venezuelan government, using sanctions, subversion and economic sabotage to impoverish the masses. Under those conditions, those who oppose imperialism and colonialism should consider any steps the Bolivarian Revolution in Venezuela uses to defend itself as legitimate.

Jan. 21 — U.S. imperialism and its lackey governments in this hemisphere, with the strategic collaboration of West European imperialism, have opened up an intensified attack on the sovereign Bolivarian government of Venezuela and its president, Nicolás Maduro.

The new offensive began Jan. 6 when the 14-country Group of Lima, formed in 2017 allegedly to peacefully resolve conflicts within Venezuela, voted 13 to 1 to prevent representatives of the Venezuelan government from entering their countries. Only the new Mexican government led by President A.M. Lopez Obrador voted against this shameful declaration.

President Maduro was inaugurated Jan. 10 for his second term, based on his overwhelming electoral victory last May, when he got over two-thirds of the votes cast. Even taking into consideration the low turnout in the May election, Maduro had a stronger electoral victory than did right-wing presidents, including Mauricio Macri in Argentina, Jair Bolsonaro in Brazil and Iván Duque in Colombia.

U.S. Vice President Mike Pence immediately denounced Maduro’s taking office as illegitimate. Pence and Trump lost the popular vote in the U.S. election in 2016, but that did not stop this arrogant attack on the Venezuelan president.

On Jan. 11, a politician with little name recognition inside Venezuela, Juan Guaidó, who headed the now defunct National Assembly, said he was ready to assume the responsibilities of  executive power. Since this sounds exactly like he was calling for a military coup, he was arrested on Jan. 13.

Guaidó then got further verbal support from Pence, National Security Advisor John Bolton and Secretary of State Mike Pompeo. That means he has the blessing of the most aggressive militarist faction of U.S. imperialism.

One can hardly imagine any administration other than the one in Washington openly and unashamedly calling for the overthrow of a sovereign elected government.

The posture of this administration makes it imperative for progressive forces inside the United States to defend the sovereignty of Venezuela and thus defend its legitimately elected government.

Keep in mind that Venezuela’s National Assembly no longer exists. It was declared null and void for ignoring a court order to remove three legislators for voter fraud in 2016; it was then effectively relieved of its legislative responsibilities.

Venezuelan Foreign Minister Jorge Arreaza tweeted on Jan. 16, “Venezuela demands respect for its democracy. While President Maduro calls for respectful dialogue with the U.S., Secretary Pompeo and other extremist spokesmen look to destabilize the country and incite violence. The Venezuelan people will defend its sovereignty and its constitution.”

To avoid being submerged by a snowstorm of imperialist propaganda vilifying the Maduro government, it is important to keep in mind the following facts:

Venezuela is a target of world imperialism because it sits on the largest reserves of petroleum of any single country in the world.

The Bolivarian governments in Venezuela, first of Hugo Chávez and then of Maduro, are attempting to defend the country’s sovereignty and resources and use its wealth in the interests of the poor. Washington has long targeted these progressive regimes. It backed a coup in 2002 that collapsed after a mass movement led by women workers and sections of the patriotic military rescued then-President Chávez and restored him to power.

Maduro himself was elected by a large majority and is the legitimate president, under the Venezuelan constitution, until 2025.

None of this negates the problems faced by the Venezuelan economy, which has been under relentless attack from imperialism since Chávez was first elected in 1998. Venezuela faces hyperinflation and shortages of goods, exacerbated by sabotage led by the oligarchy and the bourgeoisie and by economic sanctions imposed by imperialism.

In his annual talk, Maduro, a former bus driver, announced a fourfold increase in the minimum wage to attempt to counter  galloping inflation.

The Communist Party of Venezuela (PCV), which has differences with the Maduro government over some parts of its domestic program, nevertheless made clear that it will mobilize working people in the cities and the countryside to defend the government against imperialism. In a Jan. 7 statement answering the Lima Group, the PCV wrote:

“The Political Bureau of the PCV repudiates and condemns the pro-imperialist and anti-democratic pronouncement issued by the so-called ‘Lima Group,’ … [whose position] corresponds to the plan for the recomposition of imperialist domination, advanced in Latin America and the Caribbean by the United States of America and its European allies, in the context of the sharpening of inter-capitalist and inter-imperialist contradictions for a new distribution of the world, its natural wealth and energy sources. …

“To achieve this goal, they propose to bury the social, political and cultural conquests of the Bolivarian process and the advances achieved by the correct patriotic and anti-imperialist policy, led by President Hugo Chávez Frías. …

“To go in reverse, in spite of the inconsistencies, errors and omissions present in the direction of the Bolivarian process, would be not to understand the historical moment and to lose sight of the main enemy: U.S. imperialism and its European allies.”