As the longest federal government shutdown in U.S. history enters month two, Trump and congressional leaders appear incapable of resolving the crisis they have created, and unwilling to do more than repeatedly trade barbs or blame each other for the crisis.  But then, unlike some 800,000 federal workers, neither Trump nor members of Congress have been financially hurt by the shutdown.

Salaries of the president and his office staff, including appointees, members of Congress and Supreme Court justices, are guaranteed by the U.S. Constitution and will be uninterrupted throughout the shutdown.  While some Congress people have said they will forego being paid during the shutdown, it is their choice to make.

No one is forcing Trump, his staff or the members of Congress to work without pay or risk losing their jobs.  None are living paycheck-to-paycheck like 78 percent of all U.S. workers, according to a Jan. 11 report by Forbes.com.  No one in the White House or in the halls of Congress faces the loss of food and housing security resulting from the extended shutdown.

In fact, a majority of the members of Congress, including both Republicans and Democrats, are millionaires. In 2016 the median net worth of U.S. Congress members was $1.2 million and continuing to grow, at the same time that net incomes for most workers in the U.S. were on the decline.  The recent November election may have resulted in some lower-income people being elected as representatives in the House, but by and large it remains a millionaires’ club.

The majority of political appointees are also guaranteed to be paid by the Office of Personnel Management, which considers them to be “entitled to the pay of their offices solely by virtue of their status as an officer, rather than by virtue of the hours they work.” While 400,000 federal workers are forced to work without pay, political appointees get paid whether or not they show up for work. 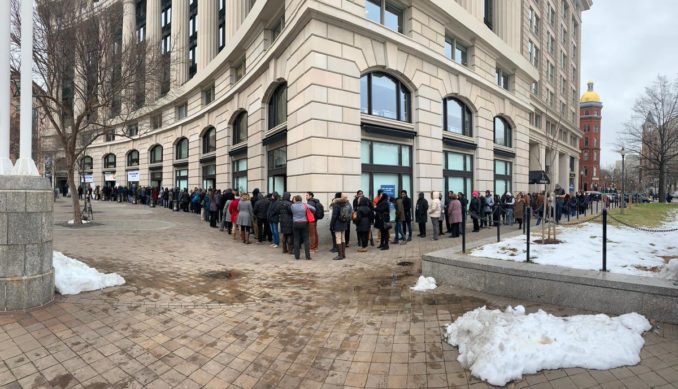 Furloughed and unpaid federal workers line up for free, hot meals at the World Central Kitchen in Washington, D.C. Over 4,400 meals were served on Jan. 16.

The administrators of this capitalist state aren’t the only ones whose incomes are protected from the impact of the extended shutdown. In September 2018, legislation was passed to guarantee funding for a few select programs considered “essential” to the capitalist state.

This advance funding protected two key areas of state repression: the National Security Agency and the Department of Defense, which funds the military. Because 43,000 Coast Guard employees fall under the Department of Homeland Security, and not Defense, they were not extended the same protection so they are not receiving paychecks.

Trump announced Jan. 17 that all U.S. diplomats and other State Department employees would be called back to work, as money had somehow been found to guarantee their salaries. Given recent stock market fluctuations, it appears that Trump wants to assure his friends on Wall Street that he can protect their overseas investments.

In the 2018 budget, and proposed again for 2019, the military brass received everything they wanted and more — $700 billion in 2018 and $716 billion this year. Contrary to Trump’s recent claims, this increased funding is not going to raise GIs’ pay.  It is lining the pockets of top executives of weapons contractors like Boeing, Raytheon, Lockheed Martin and more. This benefit for the rich comes on top of massive cuts in the tax rate for corporations.

While programs like WIC programs, housing assistance, and protection of food and water are treated as “nonessential” services, spying on the entire civilian population is seen as “vital” to ruling-class interests.  The NSA, the U.S. government’s surveillance tool, is also exempt from the shutdown. Wiretapping phones, collecting mega amounts of electronic communications personal data, and tracking the whereabouts of people through their cell phones are all seen as “vital” to the interests of protecting the capitalist class.

The budget of the U.S. government’s other major spy network — the Central Intelligence Agency — is largely hidden from the public record, so it’s not possible to know if any staff (other than janitors, etc.) are impacted by the shutdown. It is probably safe to guess that the answer is no.

In reality, Trump’s government shutdown is a war on workers, and not just those employed by the federal government. Meeting the needs of the population for food security and safety, health care, education, housing, environmental protection and public safety are not considered “essential services” by the capitalist class.

To Trump and members of the bourgeois ruling class, the functions they value most, and have sustained funding for, are the tools of state repression, both domestic and international.

The shutdown lays bare the true reason for the existence of the capitalist state.