Jan. 20 — As a large banner was hoisted today on the walls of the union headquarters, President Keith Brown of the Oakland Education Association announced a strike vote will take place from Jan. 29 to Feb. 1. The banner read: “Oakland teachers ready to strike!”

On Jan. 18, hundreds of Oakland teachers took their contract fight to the streets to demand that the school district bargain fairly and meet the demands of teachers, students and the community. Their “sick-out” was a one-day wildcat strike action — not authorized by the Oakland Education Association — boldly taken by high school and middle school teachers despite threats from district heads of retaliation and no pay.

Teachers and students from all over Oakland rallied early in the morning at Oakland Technical High School. A large contingent came from East Oakland schools. After picketing for an hour, the demonstrators — led by Fremont High School, one of the schools on the district’s closure list — took off for the school district office in downtown Oakland. Many passing cars honked their horns in solidarity, showing community support for Oakland teachers is high.

The march ended in front of Oakland Unified School District headquarters. Teachers and students began a strong picket line there that spilled over into the street, and a speak-out and teach-in of students and teachers was held in front of the district building. 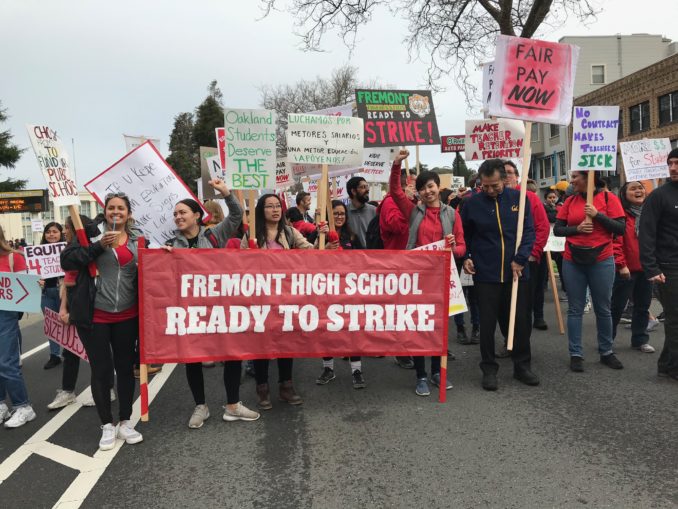 Kehinde Salter, a teacher at Fremont, asked, “Do you know what’s supposed to be a right in this country? Public education!” She went on to criticize the privatization of education and the refusal of the system to adequately fund public schools. Teachers from more than a dozen schools addressed the crowd, describing their poorly funded schools and deteriorating working conditions.

While the rally was going on, students began taping signs and post-its on the doors of the district offices. Students and community members pounded on drums, chanting, “We are Oakland, stop the school closures” and “The people, united, will never be defeated.” Others chalked slogans on the sidewalk in front of the building.

Their demands mirrored the bargaining points of the OEA. Teachers in Oakland earn at least $11,000 less than teachers in other Bay Area school districts. Lower wages are forcing many teachers to leave Oakland and move to other areas where they can afford to live. Contract demands include smaller class sizes, more school nurses and a smaller students-to-counselor ratio.

The wildcat action also protested district plans to close 24 public schools — most of them in the flatlands of East Oakland. No schools are targeted to close in the more privileged Oakland hills.

Teachers at Roots International Academy, a public middle school, recently received notice that their school would be closed in June and both students and teachers would be consolidated with another school. This was done without consultation with the teachers, students or neighboring community.

Roots is a neighborhood school. Roots teachers and students participated in today’s sick-out. Students testified about how their teachers have supported them and helped them be successful. Roots teachers invited everyone to protest at the Jan. 23 school board meeting when the school closure will be under discussion.

The sick-out was an indication of the tremendous energy and potential of teacher and student activism against attacks on public education. After the sick-out, hundreds of teachers, students and community members, led by local artists, made signs and banners at the OEA headquarters. The messages from this weekend are “Keep teachers in Oakland” and “Oakland teachers are ready to strike.”

Greenspan is an Oakland middle school teacher and OEA member who participated in the Jan. 18 sick-out.