A community delegation delivered thousands of petitions to Philadelphia District Attorney Larry Krasner on Jan. 7, asking him to not stand in the way of justice for Mumia Abu-Jamal and to not appeal a Dec. 27, 2018, court decision by Common Pleas Judge Leon Tucker.

Wayne Alexander Cook, a nephew of Mumia Abu-Jamal, handed the 4,227 signed petitions to Krasner’s assistant as the delegation entered the lobby outside the DA’s office.

The thick manila envelope also contained letters from Tadashi Seto, the International Labor Solidarity Committee of Doro-Chiba, the Japanese rail workers’ union; Edwin R Ferris, International Secretary-Treasurer of International Longshore & Warehouse Union; and other labor statements in support of Abu-Jamal’s quest for freedom after 37 years in prison for a crime he didn’t commit.

Krasner refused to talk with the group that also included Michael Africa Jr., son of MOVE 9 members Debbie and Michael Africa Sr., released from prison in 2018; Sandy Joy, a Rowan University professor; and other members of the umbrella support group Mobilization4Mumia. The DA’s Director of Communications Ben Waxman did meet with the group, but revealed no new information when asked whether or not Krasner will appeal. “That’s above my paygrade,” he said. 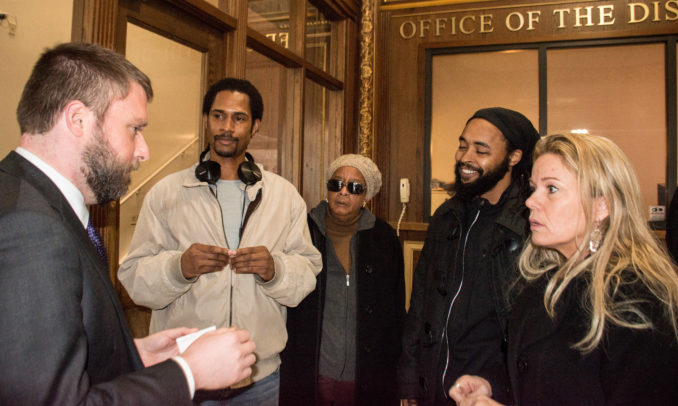 The online petitions were gathered in 10 days from thousands of people in the U.S. and from around the world by Roots Action and Mobilization4Mumia.

The petitions are part of an effort to persuade Philadelphia DA Krasner to not appeal Tucker’s ruling.  Such an appeal would lead to years of court proceedings and further postpone Abu-Jamal’s chance to prove his innocence. Abu-Jamal has spent almost four decades in prison and suffers from serious liver disease and related ailments. Years of court delays will be nothing less than a death sentence for him, as well as denial of justice.

On Jan. 5, almost 200 people marched in the rain with signs and banners in front of the DA’s office chanting, “Justice!”  “Krasner: Don’t Appeal!” and “Free Mumia!”

Mumia Abu-Jamal won the significant victory in Judge Leon Tucker’s decision granting Abu-Jamal new rights to re-open appeals. The ruling could impact other prisoners whose appeals have been similarly denied by biased judges.

Tucker ruled that former PA Supreme Court Justice Ronald Castille denied Abu-Jamal fair and impartial hearings by not recusing himself from the defendant’s appeals between 1998 and 2012.  The ruling referenced Castille’s public statements of being a “law and order” prosecutor, responsible for 45 men on death row; his siding with the Fraternal Order of Police; and new evidence supporting the claim that Castille singled out men convicted as “police killers.” Tucker cited all the above because they created the appearance of bias and impropriety in the appeal process.

Krasner ran for Philadelphia District Attorney on a platform that included standing “for justice, not just for convictions.”  He promoted reviewing past convictions and freeing the wrongfully convicted. In Philadelphia, Abu-Jamal’s frame-up stands out as the city’s most notorious wrongful conviction. Yet, after his election victory, Krasner appointed Ron Castille to his transition team.

Abu-Jamal has always maintained his innocence in the fatal shooting of police officer Daniel Faulkner. Judge Tucker’s ruling means that Abu-Jamal’s appeals of his 1982 conviction are restored. Abu-Jamal has argued through his past appeals that he was framed by police and that the prosecution manufactured evidence of guilt and suppressed proof of his innocence, in addition to other violations of his due process rights.

Long-time International Concerned Family and Friends of Mumia Abu-Jamal organizer Pam Africa said, “After decades in prison for a crime he didn’t commit, the charges should be dismissed and he should be freed.”

District Attorney Krasner has until Jan. 27 to decide whether to appeal or to let Mumia have a chance to prove his innocence. For actions to take now for Mumia, go to mobilization4mumia.com/actions/.