Montgomery, AL – Advocates for a wide range of struggles in Alabama met with a new generation of health activists here on Nov. 16 at the Peoples Tribunal for food, water and health justice. 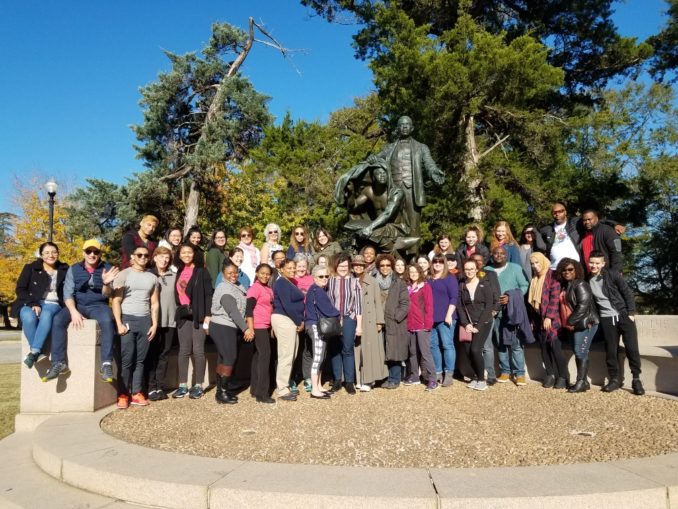 The Tribunal was part of a three-day conference organized by Critical Dietetics, an organization that “serves as the place for inquiry and exploration regarding gender, race, class, ability, size” in relation to food and food justice. Key organizers were Dr. Jill White, a Workers World Party member on the faculty at Dominican University in Illinois, and Dr. Jacqui Gingras of Ryerson University in Toronto, Canada.

The conference was held at Alabama State University, founded in 1867 as Lincoln Normal School by nine formerly enslaved men. In 1873, ASU became the nation’s first state-sponsored liberal arts institution for the higher education of African-American people.

The Tribunal opened with a talk by this writer on the roots of food justice struggles in the U.S. South, encompassing resistance by Indigenous peoples to colonization and by African-descent peoples to enslavement.

A dynamic panel of speakers from Black Belt Citizens Fighting for Health and Justice followed. They outlined environmental racism in Alabama as it affects the health and well-being of majority Black communities.

Black Belt Citizens has been fighting for 10 years against the dumping of coal ash in their community of Uniontown by the Tennessee Valley Authority. Yawah Awolowo of Sumter County spoke of her experience as an organic farmer, forging a path in her community toward healthful nutrition in the face of this imposed catastrophe. (blackbeltcitizens.org)

Phyllis Gosa gave a dramatic and moving account of struggles against a landfill in her Ashurst Bar/Smith community in Tallapoosa County. Six generations of her family have lived and owned property there since winning freedom from enslavement. That landfill is receiving trash from all 67 Alabama counties and three Georgia counties.

Gosa emphasized: “This trash is literally dumped in our front and back yards. The landfill has essentially taken the land away from us, extinguishing this connection to our ancestors. … This is allowed to happen because we are Black people. To me, this is blatant racism.” Gosa was the first African-American woman graduate of Auburn University’s School of Pharmacy.

Legacies of struggle in Montgomery

A panel of speakers from Church Women United Montgomery and the Montgomery Improvement Association followed, educating about the continuing need for food justice in Alabama where 1 in 4 children do not know where their next meal is coming from.

These speakers had a direct connection to earlier justice struggles in Alabama; some participated in the Montgomery Bus Boycott of 1954. In fact, Alabama State University was key to the boycott’s success. Rosa Parks was an alumna of ASU. After Parks’ arrest for defying segregation laws on local buses, ASU English Professor Jo Ann Robinson and two students mimeographed 35,000 leaflets and distributed them to workers in the Black community to begin “the city that walked” resistance.

Chris Johns, ASU director of counseling, spoke about food insecurity on campus, where students may be struggling financially to afford both books and meals. A recently established food pantry has been set up to assist them.

Connections between Alabama health justice issues and international conditions further South were addressed by Ana and Danny Irizarry. They reported on the dire suffering in Puerto Rico following Hurricane Maria in 2017 and in Mexico after the earthquakes of 2017-18.

Mariana Deseda of the Alabama Coalition for Immigrant Justice highlighted the struggles of immigrant workers in Alabama to obtain adequate housing, food and wages. Right-wing attacks on immigrants began here long before the current Trump-initiated assaults. In 2011, Alabama House Bill 26 became the most punitive anti-immigrant law in the U.S., causing immigrant families to flee the state.

A sobering highlight of the Tribunal was a broadcast phone call with “Swift Justice,” who is currently incarcerated in an Alabama prison. He spoke at length about the nutritionally inadequate prison food, often bug-ridden or rotten, and the polluted drinking water.

Alabama prisons have been under decades of court-ordered scrutiny because of dangerous overcrowding. The work of Montgomery’s Equal Justice Initiative has drawn renewed attention to racist bias in imposition of the death penalty here and also to the roots of the Alabama prison system in 19th-century enslavement of African-American people.

Tribunal participants learned more about these connections in Montgomery when they visited the Legacy Museum: From Enslavement to Mass Incarceration and the National Memorial for Peace and Justice. (museumandmemorial.eji.org)