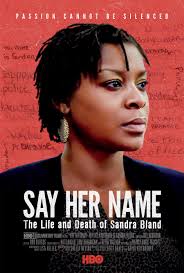 This month HBO premiered the documentary “Say Her Name: The Life and Death of Sandra Bland.”  The December premiere followed an October release of “The Sentence,” which chronicled the story of Cindy Shank, a Mexican-American woman unjustly incarcerated on criminal conspiracy charges.

Both these films show that issues relating to women of color, mass incarceration, police brutality and other forms of state violence have now been placed at a critical intersection in the center of public discourse.

Amidst the current outcry against the police abuse of Jazmine Headley in New York City and in the renewed defense of incarcerated Cyntoia Brown in Tennessee, both African-American women, the release of “Say Her Name” is especially timely.

The documentary places Bland’s life, family and activism at the center of the story. The film also raises crucial questions about the police detention of Bland, her jailing and her death, while steering clear of much of the speculation many people encountered on the internet.

“Say Her Name” reveals Sandra Bland to have been a dynamic individual. A member of a Black sorority, Bland had protested against police violence in college. Back home, Bland quit a corporate job once she became aware the company profited from mass incarceration. She created her own internet show, “Sandy Speaks,” where she tackled issues of police abuse and horizontal violence in the Black community. Underscoring self-reliance and self-determination among Black youth, Bland stated in a video: “You can do it. We can be successful. It is up to us.”

Politically aware and a leader, Bland worked with children and was returning to her alma mater to help administer a summer program in July 2015.

The death of Sandra Bland

That month, the death of Sandra Bland first made national headlines when a grassroots campaign arose by her family, friends and sorority sisters  demanding an investigation into the cause of her death.

On the afternoon of July 10, 2015, Bland was pulled over on U.S. Route 290 by Texas State Trooper Brian Encinia for failure to signal a lane change.

The truth is that motorists of color are often under surveillance and profiled in that area, especially those with out-of-state license plates. Latoya Smith, a Sigma Gamma Rho sorority sister of Bland, explained in the documentary that the Prairie View community, a majority Black town, is overpoliced. At any time, students, staff and faculty are subject to five police agencies: campus police, state police, county sheriff deputies, county constables and local police.

Dashcam footage later confirmed the trivial and the coerced nature of the police stop of Bland’s car that afternoon. Encinia tailgated Bland until she was forced to change lanes to let him pass. When she did so without signaling, Encinia proceeded to pull her over.

Then violence at this unnecessary vehicle stop escalated. As the documentary shows, Officer Encinia likely assaulted Bland before forcefully removing her from the car, throwing her to the ground and restraining her. After she was charged with assaulting an officer, Bland was booked in the county jail and held on $5,000 bond. Then, three days after the stop, Bland was found dead, hanging in her cell.

While many, including her family members, have said that Bland would not have killed herself, the documentarians and others make one point clear: The cause of Bland’s death was the unjust stop, the lies reported by Encinia and the mismanagement by county jail officials.

Whether the most flagrant police actions that have been proposed happened, the racist profiling of Sandra Bland was undoubtedly the cause of her death.

The progressive network of women and men who loved Sandra Bland while she was alive became her standard bearers once she was dead. Beginning with her sorority sisters, the hashtag #whathappenedtosandrabland spread rapidly through social media, especially in Black college circles and Black fraternities and sororities.

The documentary elucidates the way this grassroots movement shifted the gender dialogue in the Movement for Black Lives. After the hashtag was created in early 2015, Sandra Bland became the highest profiled death in the #sayhername struggle.

But the visibility of Sandra Bland’s death is not intended to diminish the memory or loss of cisgender Black males who’ve died at the hands of police or vigilantes. Instead, the story of Sandra Bland brings a fuller picture of state violence against Black people and people of color by disrupting the myth that Black women have escaped state violence.

The legacy of Sandra Bland’s resistance

The Bland case is of immediate importance in San Diego. On the afternoon of Nov. 27, El Cajon resident Aleah Jenkins was taken into custody by cops following a traffic stop in the nearby, upscale community of La Jolla. Aleah was a passenger.

During the stop, this 24-year-old mother of three complained of stomach pains. The arresting officers jokingly dismissed Jenkins’ pleas for help despite her vomiting. They continued to take her to jail — in what might have been as much as an hour-long drive. Once the officers reached the station, Jenkins was found unresponsive. Only then was she transported to the hospital — with brain damage. On Dec. 6, Jenkins died.

Police have certainly speculated that Jenkins consumed a controlled substance. Yet the injustices highlighted in Sandra Bland’s story remind activists everywhere that none of that matters.

The only thing that matters to activists is that if that car had not been stopped in what certainly seems to be a case of racist profiling, and if the police had not ignored Aleah Jenkins’ pleas for help — the cries of a young African-American woman — she would be alive right now.