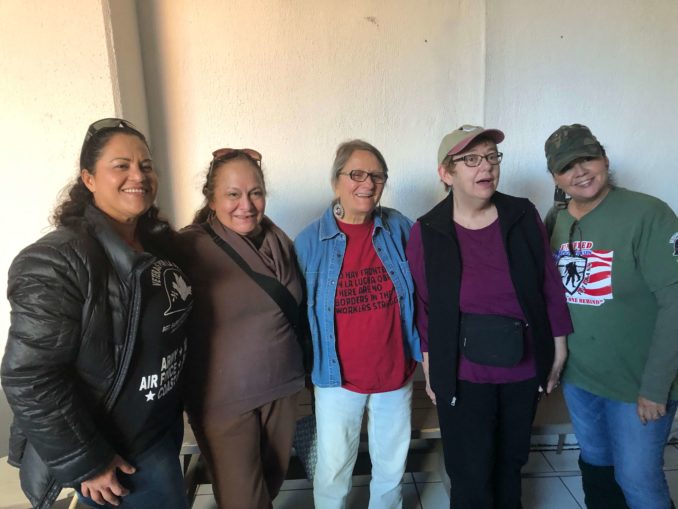 Tijuana, Mexico – A solidarity delegation organized by Fight for Im/migrants and Refugees Everywhere (FIRE) went to Mexico from Dec. 6 to 9 to meet with caravanista organizers and provide humanitarian aid to the thousands of Central American families who find themselves stranded on the U.S. border.

The FIRE delegation joined activists from Border Veterans, an organization for U.S. military veterans who have been deported, U.S. Veterans for Peace, and local church groups and community members to bring much needed supplies to the migrant families both in Tijuana and in nearby Barretal, the largest refugee camp for asylum seekers in Mexico.

FIRE met with caravanistas in Barretal just days after torrential rains hit the camp, which flooded bathrooms and soaked the residents’ tents, blankets and clothes. Temperatures plummet at night, so the dampness, combined with bitter cold, made conditions even more difficult for the 4,000 to 5,000 migrants in Barretal.

However, by the time the FIRE delegation arrived at the camp on Dec. 6 to bring clean socks, washcloths, body wash and other toiletries, spirits in the camp had improved. Music blared from a karaoke machine while migrants sang along, some youths danced and played soccer, and preparations were made for a small festival for the kids. The caravan is comprised almost entirely of young families, with many young children and infants among them.

“You’re looking at an entire generation of displaced people,” one Honduran organizer named Dani told the FIRE delegation. “And it is a great generation. I have met here so many future singers, musicians, artisans and activists.

“I want to thank those in the United States who have helped us. I know that North Americans have a big heart and are a people who stand in solidarity with us. Thank you for your support and for your noble hearts. The Mexican people, as well.”

“I didn’t believe that there could exist so much empathy, so much devotion, that you [United States and Mexican activists] have shown.”

“But,” Dani continues, “we know there are some people everywhere in the world who lack awareness of what is the origin of these problems. Therefore they defend causes that are a lie, causes that are murderous. In doing so, they think they fight for good things, but they fight for bad things. You can be murdering entire populations, innocent peoples.”

The majority of these young families, who are exercising their right under international law to seek asylum in the United States, come from Honduras, where a U.S.-backed coup in 2009 has lead to the collapse of civil society, political repression and widespread violence from criminal and fascist gangs. Clearly, the 13 U.S. military bases currently active in Honduras are not being used to protect the people.

“How much do you think it costs to maintain 13 bases?” Dani asks. “At a fraction of that price, could you not build 13 hospitals? Or 13 universities?”

It’s difficult to determine exactly how many migrants have come through Tijuana in recent months seeking refuge in the United States. As of this weekend, over 2,000 families had applied for asylum. Hundreds more have risked deportation, detention and death by crossing the border without documents. That requires getting around “the Wall” that, contrary to the narrative promoted by the corporate media and racist Trump, has already been built and runs like a deep scar across occupied Mexico.

All told, it’s likely that as many as 10,000 to 15,000 caravanistas have embarked on the harrowing trek from Central America to the U.S.

Asylum seekers have few options once they arrive in Tijuana in hopes of making it across the largest border U.S. checkpoint to San Diego. Immigration authorities on both sides of the border have coordinated a ticket system, wherein families may register their asylum claim in order to be granted a claim number. Then they must wait until that number is called, at which point they are interviewed and the U.S. makes a determination on whether they have a valid claim.

Thousands of families have so far registered and many must wait several months for their number to be called. If they are not at the Tijuana border when their number is called, their registration is voided and they must start the process all over.

If the asylum seekers’ initial claim is accepted, they are allowed to cross into the United States. However, they must either pay a several-thousand-dollar bond or submit to wearing an ankle bracelet so they can be tracked by Immigration and Customs Enforcement.

U.S. authorities automatically deny asylum claims to anyone who was previously deported from the U.S. as well as those convicted of certain crimes in their home country. If a person who was previously deported attempts to apply for asylum status with their children, the children will most likely be taken into U.S. custody while the adults are summarily “removed” once again. According to current U.S. law, individuals whose claims are denied will not be sent across the border to Mexico, but back to the home country they are fleeing.

Families are therefore faced with an impossible set of circumstances. They can linger near the Tijuana border, subsisting on charity, or they can turn back further into Mexico to stay at some of the better supplied refugee camps and risk missing their turn for an asylum interview. While the workers in Mexico have been welcoming their Central American neighbors, tensions between migrants and border communities are increasing due to the desperate conditions and the lack of health and sanitary facilities in the encampment.

Tijuana’s Trump-like mayor, Juan Manuel Gastelum, has said the situation has already become a “humanitarian crisis” but refuses to commit public resources to assisting the refugees and migrants. Gastelum, of the National Action Party, has called for the arrest of the caravan organizers and has taken to wearing a red baseball cap that reads “Make Tijuana Great Again,” mirroring Trump’s 2016 campaign slogan “Make America Great Again.”

Near the Tijuana border on the morning of Dec. 6, members of the FIRE delegation noticed a taxi cab with the words “Apoyamos Nuestro Alcalde” (“We Support Our Mayor”) painted on the back windshield. It was parked just around the corner from a small encampment of asylum seekers who had decided to wait their turn just a 100 yards or so from the border.

There were 25 to 30 young parents and children, including infants, living in this encampment, and they had all fled violence in Honduras. One of the asylum seekers at this encampment, Julio, explained that they are hungry and low on supplies. When asked if the local government was providing any assistance, he said that the Mexican authorities are simply other arms of the U.S. government and cooperate completely with U.S. Customs and Border Patrol.

In a small plaza immediately outside the border were a dozen or so young Mexican men who had just been deported. Only weeks before, the plaza was crammed with caravanistas and crates of supplies stacked 10 feet high.

The city of Tijuana then ordered the plaza to be vacated in order to build a new, friendly looking and colorful barricade that reads, “Tijuana, Mexico” in big letters. Police cleared the square of migrants and left the supplies on the street for anyone to take.

Hector Lopez and his spouse Lupita were members of the community who had been cooking hot meals for the migrants in the plaza shortly before it was cleared by police; they later scrambled to rescue as many supplies as they could. Lopez is a U.S. military veteran who was deported to Mexico in 2006.

“I was only born here. Ninety-five percent of my life I was in the United States, so I’m an American. I was just born in Mexico,” Hector told the FIRE delegation in the Tijuana office of Unified U.S. Deported Veterans, while wearing a sweatshirt that reads Veteranos Por La Paz (Veterans for Peace).

Apart from providing humanitarian aid and much needed supplies, Hector and Lupita Lopez, along with their colleague Robert, another deported veteran, and his spouse work tirelessly to combat the rampant misinformation that is spread to migrants and asylum seekers.

Deported veterans also work with local church groups to assist caravanistas with legal assistance and counseling and psychology services. They’re the sort of first responders who assist both migrants and deportees. In general, they discourage families from attempting to cross the border “illegally,” especially since Trump signed an executive order that makes it more likely parents can be separated from their children for doing so.

But the longer the families wait, the more they require assistance. Many families are being encouraged to find work and settle in Mexico, as their safety and wellbeing is not necessarily secure once they cross into the United States.

“People are not sure when their next meal will be. It’s clear the authorities are purposefully restricting food so families are worn down and more likely to sign their own deportation documents,” Lupita Lopez explains.

For now, these several thousand families are waiting, displaced from their home by U.S. imperialism.

A week of action has been called in solidarity with the migrant caravan, culminating on Dec. 18, International Migrants Day. FIRE and Workers World Party are co-sponsoring events in many cities across the United States.

“The people know they are not alone. The people have faith that you are the only ones who can break down this wall, no one else,” says Alfonso Guerrero Ulloa, a Honduran activist who was granted permanent asylum in Mexico after being targeted by both the U.S. and Honduran governments for his resistance to imperialism.

Ulloa has helped coordinate with the caravanistas and has been instrumental in the supply lines and safety in Barretal.

As he says this, Ulloa is greeted by a young woman who is carrying her 2- month-old daughter.

“Ah!” says Ulloa. “And here is our youngest freedom fighter.”