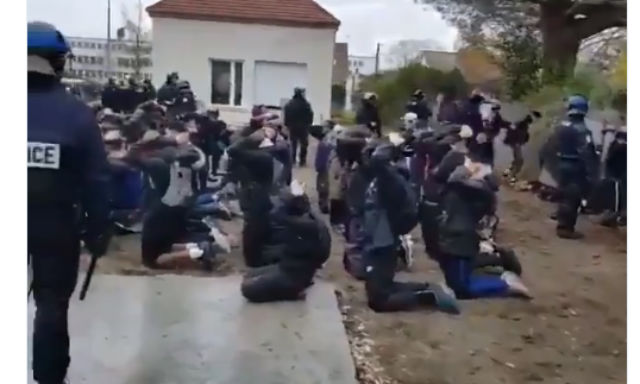 A scene of ordinary life in France, in these times of conflict: On Thursday, Dec. 6, late morning, in front of the gates of a secondary school in a very peaceful town in the Paris suburbs, about 100 students aged 15-17 are strolling from their high school to go to lunch, chatting, joking and relieved that the half-day classes are over.

Strange: In front of the school buildings, a group of police block access to the street that these young people usually take to get home. So without any fuss, the students take another street.

Then a troop of about 20 riot cops (CRS), equipped with helmets, breastplates and shields, suddenly appears and charges. Faced with bewildered and terrified teenagers, the CRS stop and line up; three of them step forward and arm their tear gas cannons. A youth screams: “Let’s get out of here, they’re going to shoot! They’re going to shoot!”

They shot. Those students who do not remain frozen in shocked terror flee with all their strength; the others suddenly find themselves assaulted, brutally beaten, insulted. One of them, who fell to the ground, was beaten  by two CRSs who yelled at him: “Dirty bastard!”; a girl, beaten, her mouth bloody, hears another CRS screaming: “Little shit!”

Under the assault by what are called, even in cases like this one, “peacekeepers,” young people manage to escape, running into the school to take refuge or rushing into adjacent alleys.

What had these youths done? Nothing. They had done absolutely nothing. They were leaving school, going home, and the CRS brutalized them. For no reason.

Incomprehensible. Unacceptable. Worrisome. There have been dozens and dozens of events like this in France in the last few days. In this France that President Emmanuel Macron has “reformed” with blows from police batons.

The day before this assault, Dec. 5, several high school students had been seriously injured by Flash-Balls fired by cops. One, 16 years old, hit in the forehead, in the Pays de la Loire region in western France; the other, same age, hit in the face, in Ile-de-France, the region that includes Paris.

Videos of these events were immediately posted on social networks. In the two schools, general assemblies of teachers voted their solidarity with their students and called for the general closing of high schools.

That day more than 200 high schools were blockaded throughout the country, and many others were disrupted. The mobilization of “Yellow Vests” is spreading like oil on water, and the protest has now reached the world of students.

At the call of high school unions, or sometimes more spontaneously, many young people are demonstrating against the neoliberal reform of the national education system. This “reform” is aimed at increasing school fees and tightening university entrance selection in order to further exclude children from low-income families.

The government’s response: Send in the troops and have them fire tear gas canisters and Flash-Balls — at random or as soon as one garbage can burns.

Throughout the country, more than 150 teenagers were arrested on Dec. 5 alone. In the most working-class town in the Paris region, Seine-Saint-Denis, anger and protests are already spreading to middle schools for children aged 11-14.

On the same day students approved and carried out the occupation of several sites at the Sorbonne (on the Tolbiac campus at Paris I, Paris III Censier). So the student protest movement that was broken up last April 20 when the CRS evacuated the “Free Commune of Tolbiac” by force could start all over again.

Young people are already frightened by the risks of unemployment, precariousness, and multiple and continuous socioeconomic difficulties. One thing is very clear: A regime that mistreats its youth by brutalizing them has no future. It is condemned.

Before change happens, however, the regime will use the means of violence (which it calls “legitimate”) at its disposal to try to maintain its own order — an evil, cynical and ultimately untenable order.