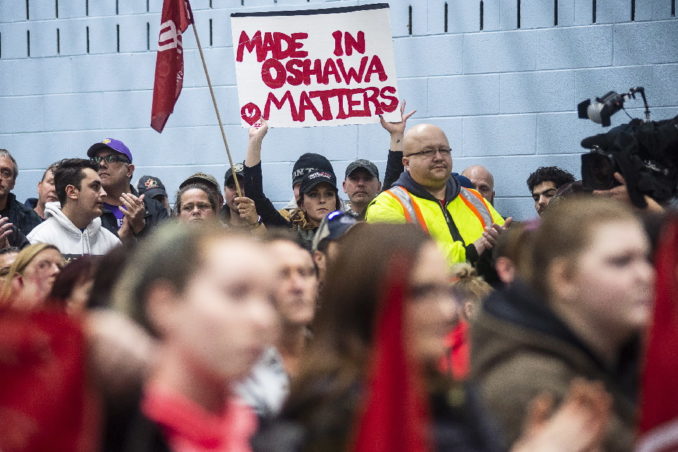 Workers in Michigan, Maryland, Ohio and Ontario, Canada, are in a state of shock after learning that General Motors intends to close their plants. On Nov. 26, with no advance warning from the company, auto workers at five plants in Metro Detroit; Baltimore, Md.; Lordstown, Ohio; and Oshawa, Ont., learned from news media their plants would stop producing current vehicles next year and were “unallocated” for any new product.

Many workers will have to relocate to keep their jobs. Temporary workers and workers who work for subcontractors in the plants — such as janitors — won’t have that option. In addition, 8,000 nonunion salaried positions are being cut corporatewide in the U.S.

Altogether 14,000 jobs are slated to go. The cuts in Canada represent 25 percent of GM’s union workforce.

The job cuts will have a “multiplier effect” — many more jobs will be affected indirectly, from parts supplier plants to steel mills to public sector jobs affected by the drop in tax revenue. At least 10,000 workers in the Oshawa area produce components for the GM Assembly plant, for example.

Plant closings are an act of corporate class war, not only against the workforce but against whole communities.

Lordstown, Ohio, is located in Trumbull County, which abuts Mahoning County. These counties comprise the Youngstown-Warren area, parts of which became “ghost towns” since the steel industry shut down most of the mills a few decades ago. GM is one of the few manufacturers left in the area that provides good union jobs.

When the auto complex opened in the 1960s, many thousands were employed there. More recently, sections of the Lordstown plant were permanently closed, with additional jobs lost to automation. Now the remaining 1,600 positions are on the chopping block.

Detroit has been devastated by decades of plant closings and predatory lending that led to mass housing foreclosures and extortionate interest rates on public debt. The predominantly white suburbs have also suffered, but nowhere near as much as this impoverished African-American-majority city. Most of the city has been untouched by the mythical “comeback” story that has been fed to the rest of the country.

That means the projected closing of the “Poletown” plant, part of which sits in Detroit and part in Hamtramck, would be a major blow to both cities. Hamtramck is a small, multinational city surrounded by Detroit.

In the 1980s GM got Detroit’s elected officials to use “eminent domain” to acquire the site of Chrysler’s closed Dodge Main complex for its new plant, along with many residential properties in the surrounding area.  This neighborhood was home to a large Polish community, sometimes referred to as “Poletown.” The destruction of the neighborhood was justified by the number of jobs the plant would provide. In addition, GM received city tax breaks for decades. After all these concessions, the company wants to close its only assembly plant in Detroit.

Workers at the Oshawa, Ont., assembly plant are represented by Unifor, which was formed by the merger of the Canadian Auto Workers and the Communications, Energy and Paperworkers Union of Canada. The CAW originally split from the United Auto Workers because the UAW had made concessions and was committed to labor-management cooperation. Nevertheless, in 2016 Unifor made some concessions to GM with the understanding that the Oshawa plant would be kept open. Now workers are being double-crossed.

GM transmission plants in Baltimore, Md., and Warren, Mich., which formerly employed thousands, are both down to a few hundred workers due to outsourcing and automation. These workers and the surrounding communities will suffer if the plants shut down.

What GM is doing is criminal! Yet it’s not unprecedented. The Detroit Three auto companies closed hundreds of plants since the 1970s, with GM closing the most. The company used its 2009 bankruptcy to shed another 16 plants,  deemed excess capacity. Now, however, GM is not only back on its feet but making billions in record profits. Its comeback would not have been possible without massive financial assistance from both the U.S. and Canadian governments.

GM is also reaping the benefits of Trump’s massive corporate tax cuts, but the company won’t use the windfall to invest in job-creating new products. GM is moving away from car production to focus on its most profitable vehicles — trucks and sport utility vehicles — the least fuel-efficient vehicles with the biggest carbon footprint. The automarker will ax its electric Chevy Volt along with the Chevy Cruze and other sedans, even its legendary Chevy Impala. This is environmental recklessness.

GM got bailed out, but workers and communities are getting sold out.

Profit motive behind the attacks

When Trump imposed new tariffs on imported products, including steel and auto parts, this was presented as a measure to protect U.S. jobs. This was a colossal falsehood. In fact, companies are stating the tariffs raise the cost of production so much that they have to move work out of the country.

While demagogic boasts that protectionist measures create jobs are proving false, it would be equally wrong to blame tariffs alone for a company’s decision to cut jobs in the U.S.

True, when the cost of production goes up, profits go down. But a company makes a conscious decision to put its bottom line ahead of the interests of its workers, communities and the environment.

GM made the justification that it wants to funnel resources into the latest technology — electric and self-driving vehicles — yet the company’s only electric vehicle is being discontinued. What hypocrisy!

The capitalist drive for profit is behind GM’s decision to slash its workforce and eliminate vehicles with a lower profit margin. CEO Mary Barra stated in a Nov. 26 news release: “The actions we are taking today continue our transformation to be highly agile, resilient and profitable.”

Ford and Fiat Chrysler Automobiles have made similar decisions to cut or eliminate car production in favor of trucks and SUVs for the same profit motive.

Workers’ fightback needed to save jobs

After GM’s announcement, Trump staged a Twitterfit, saying he will make GM keep the plants open by axing tax breaks tied to electric vehicle development. In fact, he has no legal power to do so.

Trump’s bluster is empty posturing and will not save a single job. However, some workers might be fooled by his tough talk, especially if they contrast it to the weak response of the UAW’s top leadership.

Nevertheless, it’s not right-wing demagogues but union workers at the point of production, in collaboration with community and environmental activists, who have the leverage to stay GM’s greedy hand and protect jobs.

Some union leaders have made stronger statements. Regional Director Rich Rankin, who leads UAW Region 2B which includes Lordstown, has called for publicly shaming GM. Unifor President Jerry Dias said, “We are not going away without a fight.” (CTV, Nov. 26)

Some union members hope this means their leaders will put up a real fight. But whatever happens or doesn’t happen at the top, rank-and-filers want to resist. When the Oshawa workers heard GM’s announcement of job cuts, they walked out and returned to work only after being directed to by union leaders. Poletown workers are discussing in-plant tactics to show GM they don’t accept the destruction of their jobs. UAW members in other plants are talking strike if the auto companies demand concessions in contract negotiations next fall.