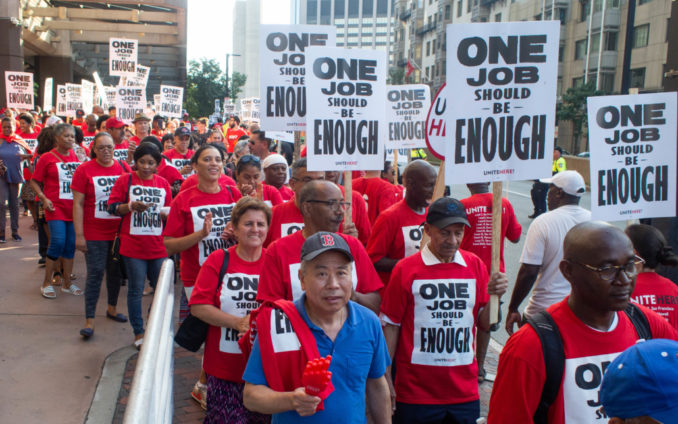 For Local 26, which also represents dining hall workers at Harvard University who struck for 22 days in 2016, this is a second landmark victory for the working class in the current national struggle against “right-to-work” (RTW) laws and other anti-union actions like the Janus decision.

Marriott acquires a new hotel property almost every day. After purchasing the country’s biggest hospitality chains — including Sheraton, Westin and Ritz — the company was determined to prevent unionized housekeepers, cooks, waitstaff and door attendants from making progress on their most important issues. Marriott wanted to outsource food services and impose hundreds of layoffs for each local.

However, city-by-city, hotel workers have been out-organizing this megacorporation. The details of UNITE HERE’s new achievements in Boston, and in other cities that have ratified contracts, are under wraps until striking workers in Hawaii and San Francisco also see victory.

Local 26 won on respect and dignity as well as bread-and-butter issues. Workers made strong demands for women’s rights at work, health and safety, immigration and union rights, as well as wages, job security, pensions, health care and holding onto their jobs.

Public support has been very strong. Teamsters refused deliveries of laundry, liquor and other essentials. Other unions contributed thousands of dollars to the strike fund; members bulked up picket lines and rallies. Rank-and-file members of weaker unions, which lacked understanding of the strike that these solidarity efforts represent, organized support delegations on their own.

Curiously, some crossing the picket line expressed support, in evidence of contradictory tendencies, while some showed sympathy but also unfamiliarity with strikes. On the other hand, this also revealed that class consciousness, enough to radically change systemic inequality in the U.S., could be developed.

Strike the only serious threat to capital’s attacks

The 2016 Harvard University Dining Services victory received worldwide attention and reintroduced the strike to today’s working class. Wall Street is on the attack, and these days striking is no longer just a negotiating tool. Workers who organize the power to shut down their workplaces are winning.

Workers are fighting back triumphantly even in states with anti-union, “right-to-work” (for less) laws, as in Michigan, where collective bargaining is very difficult. Despite that, Detroit’s UNITE HERE Local 24 hotel workers have already won. They’re also winning in Republican-dominated “red states” like West Virginia and Oklahoma, where teachers’ strikes have succeeded.

The significance of the strike effort in today’s defensive period can hardly be overstated. Striking is only possible through concerted organization. Some unions have made the strategic decision to focus on growth, advocacy and electoralism to resist the mounting pressures they face, including RTW. But developing the member consciousness required to strike is the only serious threat to capital’s relentless attacks.

Obviously, striking is very difficult. Within days workers run low on the necessities of daily life. A few days later, it is already time to apply for food stamps. However, hotel workers knew that accepting management’s take-backs meant not making ends meet anyway. Similar to Harvard, where workers’ only alternative to going on strike was losing their health care, hotel workers recognized the power of the strike and their power to win against the unacceptable.

The strike is a demonstration of worker power — not, as the anti-union logic goes, a risky decision made by “union bosses.” It reflects the organization and power workers have already built for themselves through years of struggle.

Union hotel workers prepared for a decade to coordinate this multicity battle. They voted to substantially increase dues to shore up strike funds. Shop stewards trained members to survive weeks of hardship, organizing food pantries and other relief in order to negotiate a contract that would serve the needs of a diverse membership.

While national companies like Verizon have always employed the coast-to-coast strike strategy, this strike of 10 locals, each with their own contracts, is something new. It required aligning contract periods for all cities that struck. Thanks to rank-and-file development, locals near the end of contract negotiations were able to add changes to the contract periods as an additional demand.

Only because of the credible threat member consciousness represents to employers was this even possible. Short or very long contracts demanded by employers can tie up unions in constant defense or cause them to fall into inactivity, but this rank-and-file-enabled strategy put the union years ahead of management’s mergers and acquisitions.

The strikers’ loud and spirited chants over the beat of makeshift drums, 12 hours a day, at seven hotels in bitterly cold temperatures, traveled up to penthouse suites and into corner offices blocks away. Gentrifiers filed noise complaints, pricey downtown hotel rooms had to be deeply discounted, and the Nov. 6 Wall Street Journal reported “weaker demand” impacting Marriott’s bottom line. Inside, service standards plummeted. But street action was only part of the picture — the tip of an enormous iceberg of working-class power underneath.

Because of decades of workers’ organization, Marriott was forced to concede on wage, pension, health care and workplace demands, with mostly immigrant women of color leading the way and setting a new standard for U.S. workers.

Many lessons from this momentous strike will inspire and guide working- class organization for years to come. More and more workers are facing struggles that are both offensive and defensive. Increasingly polarized times have intensified attacks on the working class by an emboldened bourgeoisie.  But workers with nothing to lose but their chains are rediscovering the strike — with a world to win.